The Era of NASA’s Space Shuttle Program will be extended by a few more months into early 2011, slightly staving off the retirement that had long been scheduled to occur by the end of 2010.

Space Shuttle Program managers have submitted a formal new “change request” to move the launch target dates of the final two shuttle flights, STS 133 and STS 134. These next, and so far last, shuttle flights had been scheduled to lift off on Sept. 16 with Discovery and in late November 2010 with Endeavour and will now be retargeted to late October 2010 and late February 2011 respectively.

The reason for changing the launch dates is due to delays in preparing the payload for the STS 133 flight, not because of any issues with the shuttle orbiter. Because of the significant change in date for the September mission, NASA can no longer meet the November launch target for STS 134.

The additional time will also permit the NASA teams more time to optimize the cargo and maximize the benefit of the final shuttle flights to the International Space Station (ISS). The STS 134 flight had previously been rescheduled from July to November when technical issues with the Alpha Magnetic Spectrometer (AMS) physics payload forced a flight delay by shuttle managers.

“A change request was submitted on Tuesday (June 22) to move the targeted launch dates for space shuttles Discovery and Endeavour,” NASA spokesperson Candrea Thomas told me. “The request would move STS-133’s target date to Oct. 29. STS-134 would be targeted for Feb. 28, 2011. The change is under review and any changes will be announced after a review by the Shuttle Program Requirements and Control Board” “The Space Shuttle Program is assessing a request to change the launch dates for STS-133 and STS-134 through a formal Change Request process,” NASA spokesman Mike Curie explained to me. “The request will be reviewed for two weeks and a final decision will be made July 1. Because STS-133 will move to October, STS-134 no longer can fly as planned in November.”

Another complicating factor is that other large vehicles will be flying to the ISS over the next few months, creating an orbital traffic jam of sorts. European ATV, Japanese HTV, and Russian Progress and Soyuz flights are all scheduled to blast off to the station later this year and early in 2011. This limits the number of available days remaining to launch shuttles to the station.

President Obama and Congress had previously authorized a contingency fund of $600 million for NASA to utilize to cover costs in case just these kinds of technical or weather delays would force an extension of the program for some months beyond the end of this year. The funds would prevent scheduling pressures from causing flight cancellations and influencing launch decisions. Curie told me, “Yes, there is enough money to carry through to fly STS-134 in February 2011.”

Discovery will be carrying the Italian built Leonardo pressurized module aloft on the STS 133 flight and it will be packed with over 10,000 kg of crew living supplies, spare parts and science gear. Leonardo functions as a moving van and has flown seven prior round trips to the orbiting lab complex, most recently on the STS 131 flight in April 2010. Leonardo is one of three Multipurpose Logistics Modules (MPLM’s) constructed in Italy.

Leonardo is currently being modified for its final flight to install additional shielding protection from micrometeoroid debris impacts so that it can be left permanently at the ISS as a Permanent Multipurpose Module (PMM). It will serve as an additional storage room for the resident crews. “Everything remains on track for converting Leonardo into the PMM and for AMS, but there is other hardware for STS-133 that will not be ready in time,” Curie explained.

“The PMM would be ready to fly, however not all the critical space station hardware spares will be ready for a Sept. 16 launch – specifically three large items that need the PMM due to their size and packing requirements in order to effectively get to orbit. They are Robonaut, the Pump Package Assembly and the Common Cabin Air Assembly (CCAA) heat exchanger. All of the items will support an October 29th launch. This will leave the station in the best possible position for its extension to 2020 as shuttle retires,” added Curie.

NASA is still considering the addition of one more flight to the shuttle manifest, designated as STS 135, but requires approval from the Obama Administration and funding from Congress.

NASA has already purchased the hardware required for the flight which will be stacked as the Launch on Need (LON) flight in support of the STS 134 mission. The Solid Rocket Boosters arrived in Florida in late May. Read my SRB report here.

A bipartisan group of US Senators including Bill Nelson (D-FL) and Kay Bailey Hutchinson (R-TX) and others are strongly urging President Obama to approve the flight.

“No decision has been made on STS-135, yet. It still is being assessed, but we do not have a definite time when we expect a decision,” according to Curie. 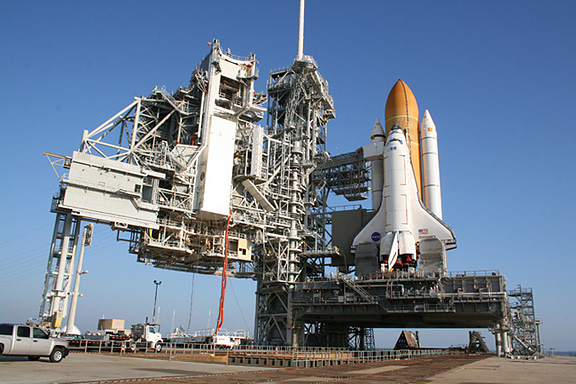 NASA is retargeting STS 133 launch of Space Shuttle Discovery to Oct 29, 2010. Discovery is shown here prior to the STS 131 launch during my visit on top of Launch Pad 39 A and after delivery of payload canister (enormous white box) containing Leonardo. Credit: Ken Kremer 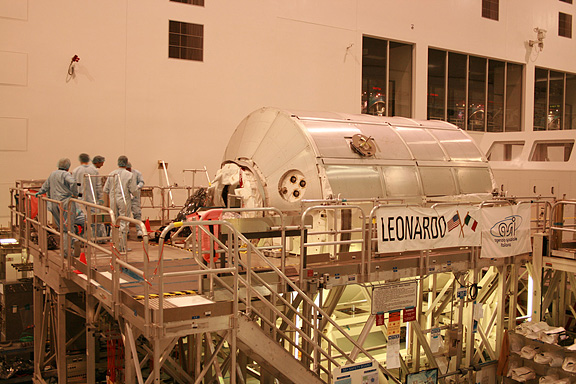 ‘Leonardo’ Multi-purpose logistics module (MPLM) inside the Space Station Processing Facility at KSC prior to STS 131 fight. Leonardo is now being modified with additional shielding protection so that it can be permanently attached to the ISS as a new storage room. The module will be delivered by the STS 133 crew. Credit: Ken Kremer