In a record breaking event, Steve Eves and his team of rocket men successfully launched a 1/10th scaled model version of the Apollo era Saturn V which took men to the moon. This is now considered the largest amateur rocket to ever be launched.

At Higgs Farm in Price, Maryland on Saturday, the rocket which weighed over 1,600 pounds at launch and stood over 36 feet tall was powered by a massive array of nine motors, eight 13,000ns N-Class motors and a 77,000ns P-Class motor. The estimated altitude the rocket was to fly was between 3,000 and 4,000 feet and the rocket was recovered.

The project led by Steve Eves and supported by ROCKETS Magazine and The Maryland Delaware Rocketry Association was made to celebrate the 40th Anniversary of the historic Moon launch in 1969 that put men on the moon for the first time. 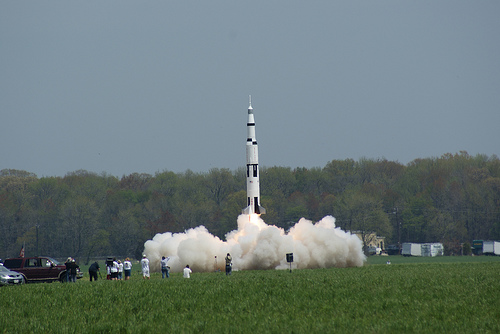 We have liftoff! (Copyright Jeff Foust)

Steve Eves talks about the project.

Pictures from the launch: