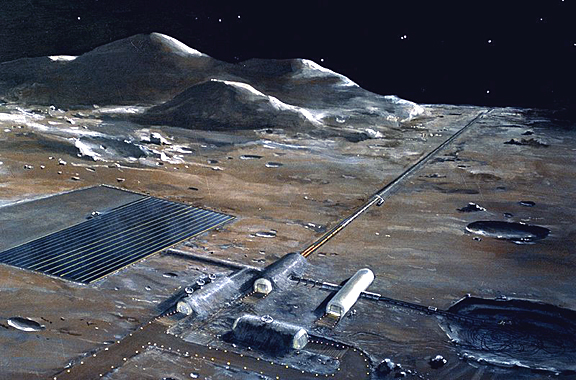 “A mass driver or electromagnetic catapult is a proposed method of non-rocket spacelaunch which would use a linear motor to accelerate and catapult payloads up to high speeds. All existing and contemplated mass drivers use coils of wire energized by electricity to make electromagnets. Sequential firing of a row of electromagnets accelerates the payload along a path. After leaving the path, the payload continues to move due to inertia. A mass driver is essentially a coilgun that magnetically accelerates a package consisting of a magnetisable holder containing a payload. Once the payload has been accelerated, the two separate, and the holder is slowed and recycled for another payload. Mass drivers can be used to propel spacecraft in two different ways: A large, ground-based mass driver could be used to launch spacecraft away from the Earth or another planet. A spacecraft could have a mass driver on board, flinging large pieces of material into space to propel itself. A hybrid design is also possible (see coilgun, railgun, or helical railgun).” – Mass driver, Wikipedia