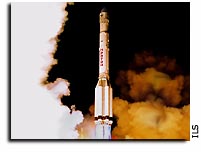 According to a report released by International Launch Services (ILS): “The most likely cause of the failure of the Proton LV Ser. No. 38602 on October 27, 1999 is the presence of metallic or mineral particulate matter inside the engine resulting in the ignition of the turbopump’s engine assembly in Stage II Engine #1 (P/N 8D411K, Ser. No. 5358161741). The most likely cause for the particulate matter to find its way into the engine is poor workmanship
at the Voronezh Mechanical Plant in 1992/93. The failure under study is categorized as a fabrication-related one.”