Have a look at the attached slides (all references to briefing dates
presenters etc is taken off). B-52 separation issues have
plagued the X-37 program from the start – and Susan Turner and Jeff Sexton have
simply tried to “wish the problem away”.

The vehicle just flies too well at the B-52 drop speeds and we
have to install a drogue chute to prevent “recontact” after launch. We
briefed Marshall on this 3 years! ago. We convinced Boeing of this
necessity and got the go ahead to proceed with systems development.

As you can imagine, this soon became a Boeing/DFRC-only development
due to the fact that no one on the MSFC X-37 team has the slightest
technical competence. 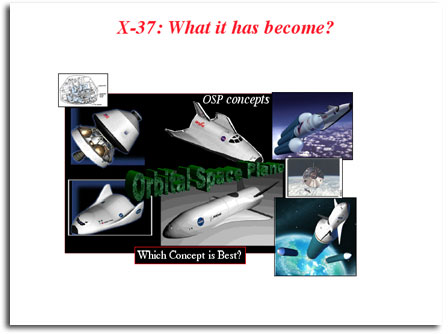 Well, as we achieved progress – and are almost ready to start testing – MSFC got worried that they are going to look bad and ordered a “stop work” on this
system.

“We are going to launch it from a hellcopter (see below) from Vandenburg and we
don’t need you guys and your B-52”.

The X-37 program is not easy. If it were, we shouldn’t be wasting the taxpayers money doing it. Taking what the program has done to date and realigning it into an essential repeat of the X-40 program begs for criticism from inside and outside of the aerospace community. It’s a baby step. How will NASA claim that we are blazing new ground for the tens of millions of dollars spent? Is NASA prepared for the criticism that Congress and OMB will give to the proposed change? Can we state that we are aggressively developing technologies for an Orbital Space Plane? If the X-37 program as currently defined is too difficult, too time consuming, or to distracting from the goal of launching an orbital vehicle, then the X-37 ALTV should be discontinued and the resources realigned with the Orbital Vehicle.