Ken Kremer for NASA Watch: ‘Plymouth Rock’ is the name of an ambitious new concept for an early human mission to explore a Near Earth Asteroid using dual Orion manned spacecraft. Two astronauts would embark on a six month round trip Asteroid Trek as soon as 2019 – before the end of this decade.

The recent discovery of a new class of many small asteroids – 5 to 75 meters wide – has enabled the formulation of this potential new destination for deep space human exploration in the near term. Favorable orbital alignments occur only a few times per decade.

The crew would conduct spacewalks to retrieve a treasure trove of soil and rock samples for high powered analysis back on Earth. This would simultaneously answer key scientific questions on the formation of our solar system as well as significantly bolster planetary defense strategies against incoming asteroids on a potentially deadly collision course with Earth.

Furthermore, the Orion Asteroid Trek would also serve as a key stepping stone on the road to Mars in the 2030’s by developing, practicing and mastering the advanced technologies essential for a human expedition to the red planet. 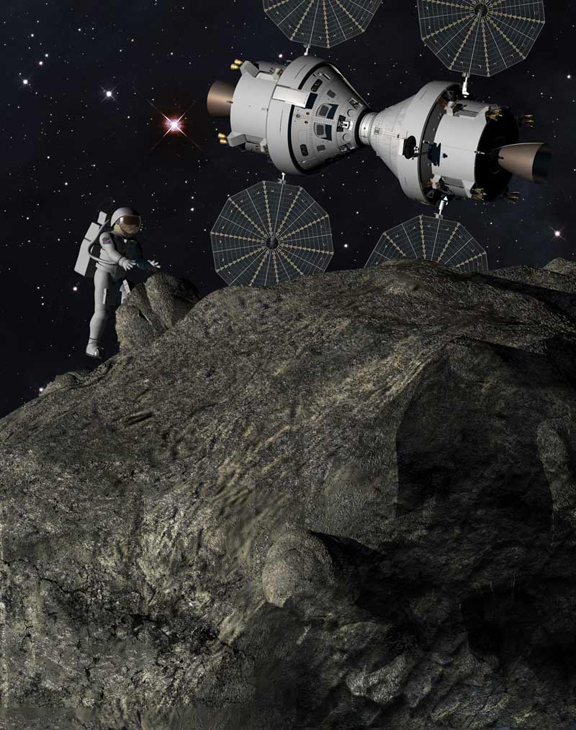 Josh Hopkins, Lockheed Martin’s principal investigator on asteroid missions and advanced human exploration spoke to me about the proposal which he outlined in a paper entitled; “Plymouth Rock: An Early Human Mission to Near Earth Asteroids Using Orion Spacecraft”, and presented at the American Institute of Aeronautics and Astronautics (AIAA) Space 2010 conference on August 30 in Anaheim, California. 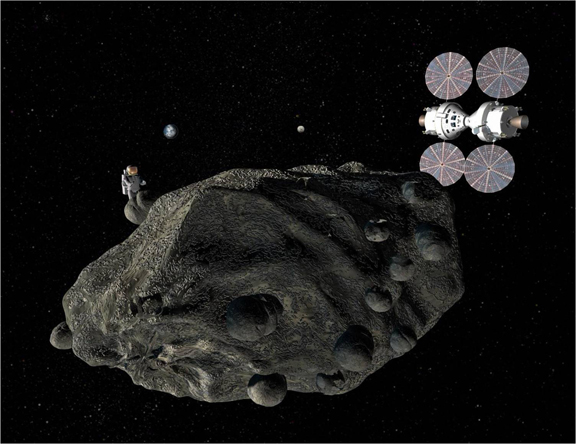 ‘Plymouth Rock’ mission uses dual Orion spacecraft. A pair of Orions provide just enough propulsion, cabin volume and life support capability to perform a minimalist asteroid mission during the most favorable orbital alignments. Dual Orions should be less expensive to develop than a new spacecraft and can be ready earlier. The second Orion could be modified to increase its volume and life support capability, at the cost of giving up redundant return capability. Credit: Lockheed Martin

A selection of asteroid candidate destinations have been identified which are several million kilometers away – a voyage many times more distant than those of the Apollo moon landing era. “They would be far easier to reach than any previously known asteroid”, says Hopkins. The level of difficulty for an asteroid flight would be on par with that of a lunar landing.

“A Dual Orion ‘minimalist’ mission can launch earlier and at low cost and also increases the safety margin”, adds Hopkins.

Lockheed’s internal study determined that a mission to Asteroid 2008 EA9 is feasible in 2019 using a pair of enhanced Orion spacecraft and a heavy lift launch vehicle slightly smaller than the proposed Ares V such as a shuttle derived booster currently being debated. The space rock is 8 to 12 meters in size and 12 million km from Earth, about 32 times further than the Moon.

Lockheed Martin calculates a total mission length of 195 days. “This is just within the vehicles capabilities and it will be stuffed to the gills”, Hopkins told me. Orion was designed for mission durations of 6 to 7 months maximum.

The baseline mission architecture calls for dual launches of two Orion capsules which would rendezvous and dock in low Earth orbit soas to be mated in a nose to nose configuration. The primary Orion would lift off with the crew on either a man-rated Delta 4 Heavy or an Ares 1.

A supplemental Orion would launch unmanned on a Heavy Lift booster, carrying most of the consumables including propellants and life support supplies and sitting atop an Earth Departure Stage that would be fired to propel the dual docked Orions on a deep space trajectory to begin the three month out-bound leg.

Upon reaching the asteroid, the astronauts would rendezvous and park nearby. They would not land because of the negligible gravity of the small target.

Inside Manned Maneuvering Unit -like suits (MMU) equipped with a propulsive backpack, one crew member would float over to the asteroid using zero-g spacewalking techniques – similar to those used in Earth orbit at the ISS. “The astronaut may attach themself to the asteroid while the 2nd crew member guides and directs the spacewalker to a range of diverse targets”, Hopkins amplified.

“The crew will collect and return about 50 to 100 kg worth of surface and subsurface samples over at least two EVA’s. They will permanently anchor several hundred kilograms of assorted science instruments using multiple techniques such as harpoons, adhesive or ropes”, he added.

Studying the samples would tell us about the birth and evolution of the solar system, allow determination of the asteroids internal structure and composition and teach us practical methods for deflection of potentially devastating asteroid impactors on a collision course with Earth in the future.

The small asteroids are the most numerous type, and therefore are the most likely to impact Earth. Both the Tunguska and Barringer Crater impactors are estimated to have been of this type and roughly 50 meters in size.

“The astronauts would remain in the vicinity for a minimum of 5 days. They could stay several days longer depending on consumables and orbital mechanics”, Hopkins speculated. Then they would jettison the supplemental Orion – to possibly continue science investigations – and fire the engines on the primary craft for the three month return journey to Earth.

In the past ten years, Astronomers have discovered dozens of examples of a new class of small, nearby asteroids in earth-like orbits that are accessible by the deep space capable Orion vehicle, according to Hopkins. They range in size from about 5 to 75 meters.

A few of these newly discovered and accessible asteroids are relatively close by and travel slowly enough so that a round trip Orion flight would be vastly simplified and much easier than previously thought. The small asteroid discoveries are so new that the implications were not even considered in prior spacecraft and mission planning.

Discoveries of new Near Earth asteroids are actually increasing – as detection techniques continue to improve – and thus the number of known mission opportunities may double by 2015.

“A small investment in upgrading ground based telescopes or radar mapping facilities such as at Arecibo in Puerto Rico could yield ten times more asteroid discoveries and many more mission opportunities”, said Hopkins.

“Lockheed Martin has been studying the asteroid concept since 2007”, Hopkins told me. “The research is all internally funded and does not imply any endorsement by NASA or any change in program plans for the Orion crew exploration vehicle.”

“Two Orions have just enough propellant to reach the easiest asteroids and have just enough pressurized volume for two astronauts. A single Orion does not have enough habitable volume, life support consumables, or propulsive impulse to meet the mission requirements.”

Substantial time and money could be saved by using the dual Orion ‘low-cost’ concept instead of investing in production of a fresh space vehicle dedicated specifically to asteroid exploration. The second Orion could either be a duplicate – affording redundant return capability – or alternatively it could be easily and affordably upgraded for deep space operations using standard components.

An enhanced Orion Deep Space Vehicle would be modified to stretch the cabin length and increase the available propulsion, living space, science equipment and crew provisions such as food, water, and oxygen – in place of the re-entry system – and also enable extended missions with more spacewalking capability.

“Orion is already designed with many of the capabilities needed for an asteroid mission because they are similar to the requirements for a lunar mission, such as radiation protection, deep-space communications, and the ability to reenter Earth’s atmosphere at much higher speeds than a vehicle designed only to go to the International Space Station”, according to Hopkins.

“With a more powerful propulsion system for Earth escape trajectories more asteroid targets – and larger in size – would be within reach of the dual Orion architecture. We could also do the same mission but in less time which would benefit crew safety via less radiation exposure. Or we can carry more supplies and perhaps a 3rd crew member could be added”, Hopkins said.

Orion was specifically designed from its inception to be lunar and deep space capable in addition to flying to the ISS in low Earth orbit, according to Larry Price, the Orion Deputy Program Manager at Lockheed Martin. 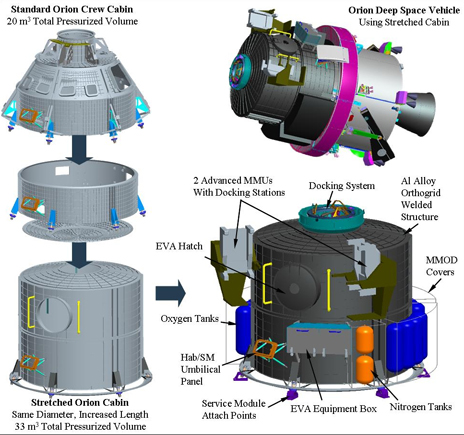 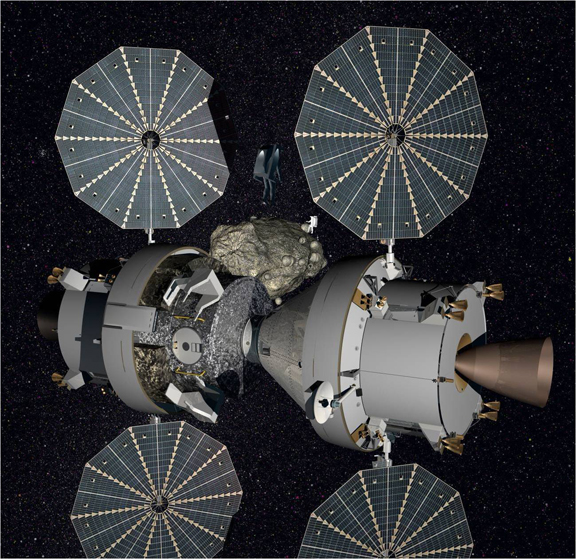 “Lockheed Martin aims to launch the first Orion into Earth orbit by 2013, given sufficient funding”, Price said to me Lockheed Martin serves as the prime contractor for Orion and is constructing the vehicle for NASA as a replacement for the retiring space shuttle. Orion is one of the major elements of NASA’s endangered Project Constellation moon program.

The future of Orion is murky. President Obama initially sought to terminate Project Constellation and cancel Orion and the Ares boosters in his 2011 NASA budget request. After strong opposition to his proposals in Congress, Obama subsequently announced a revival for Orion, but with only limited functionality as a “rescue lifeboat” for the ISS crew.

Bipartisan legislation drafted in both houses of Congress would continue funding of a fully capable Orion crew vehicle to reach LEO and beyond. But significant differences remain to be ironed out between Congress and the Obama Administration.

Meanwhile, work is progressing on the pioneer test capsule of the Orion crew vehicle – known as the Ground Test Article or GTA – which is currently undergoing pressure testing by Lockheed Martin at the NASA Michoud Assembly facility in New Orleans, LA.

I inspected the Orion GTA first hand at Michoud after the structural framework was recently welded into shape. See my GTA photo below and Nasatech.net panorama

The Orion GTA is the pathfinder for the crewed vehicle that could eventually by rocketed into deep space for the Orion Asteroid Trek. 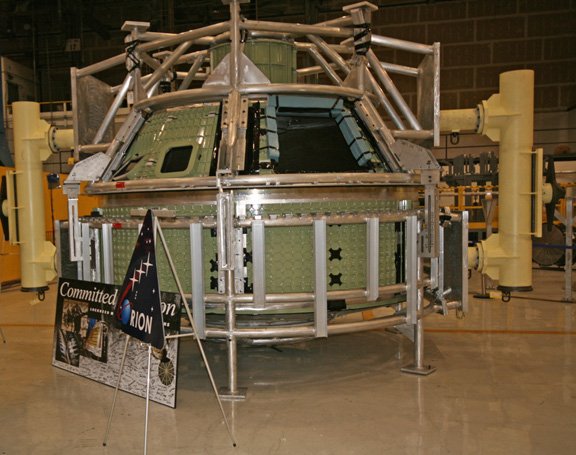 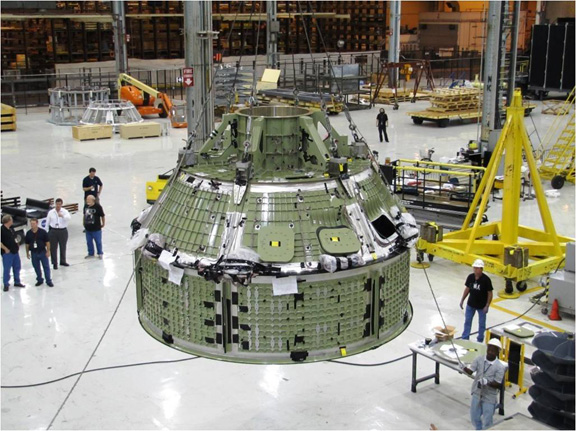