The STS-112 mission, scheduled for launch on 2 October 2002, will have a live camera in a place where none has been placed before: on the Shuttle’s large External Tank (ET).

The view is certain to be spectacular.

The “Space Shuttle Vehicle Observation Camera” is designed to function independently of all other Space Shuttle systems and will provide real-time video of a variety of activities.

The camera will be activated during the T-9 minute hold in the Shuttle’s countdown and will provide continuous video starting with pre-launch activities. The camera will then provide live views during Space Shuttle launch and ascent, Solid Rocket Booster (SRB) separation, and ET separation.

As to how long an image will be available after ET separation, so long as the geometric line of sight with the s-band antennas is maintained, an image should continue to be received for 3 to 5 minutes. Eventually the tank will start to heat from atmospheric friction and the camera will become inoperative.

The camera is mounted within a fairing on the external surface of the ET above the right hand side of the nose of the Space Shuttle orbiter. Two S-band antennas are mounted 180 degrees apart (one on either side) on the surface of the ET. An electronics package is installed on the SRB crossbeam inside the ET. 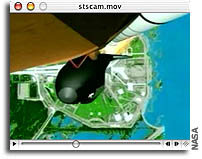 The camera is from the RocketCam(TM) product line by Ecliptic Enterprises. STS-112 will be 21st launch for RocketCam (if you don’t count the first demo launch in 1997). All of the RocketCam’s have worked so far. A total of about three dozen cameras have been flown.

The camera used in the Shuttle system has the greatest similarity to the one used on the Titan IV, and to some extent to that used on the Delta II.

The view of the Earth falling away will be familiar to anyone who has watched a Delta rocket launch lately – but will be a first for the Space Shuttle program.