Reader note: Click on this NASA web site and download the 2010 ISS Calendar. Notice something odd about the dates? Did January 1, 2010 start on a Wednesday? Does February have 30 days? Does March have 31 days? Does April have 31 days? And December 1, 2010 is New Years Day. That’s as far as I went. Doesn’t anyone check these things before putting them on their web site? WOW! Must be the same group that mixed up miles and kilometers.

Keith’s note: I looked a bit further. This calendar shows 24 January as the date that Apollo 8 circled the Moon (it was launched on 21 January – the date that this calendar claims that the Winter Solstice begins), that Challenger was lost on 28 December, that Columbia was lost on 1 November, that Sputnik 1 was launched on 4 March, that Yuri Gagarin’s flight was on 12 September, and that Spring begins on 20 October 2010…

In fairness, the website does say “(Note: In order to print the document correctly, please select the two-sided print option in your printer dialog box)” – but there is nothing on the calendar file itself that says that. Indeed, the reader who alerted me to this said “I discovered the error when I went to put the dates of my vacation on it and they didn’t match up with my airline reservation dates. I got nervous and checked another calendar and discovered the mistake. That’s when I discovered some of the more obvious errors.”. Anyone going directly to this link (that happens a lot, you know) will not know this. Moreover, not everyone has a printer that (easily) prints in two sided mode.

Indeed when I went to print it, my computer automatically scaled it to fit on an 8.5 by 11 sheet of paper – with the pages paired incorrectly – that is because of the way it was formatted (by NASA) as a PDF file. 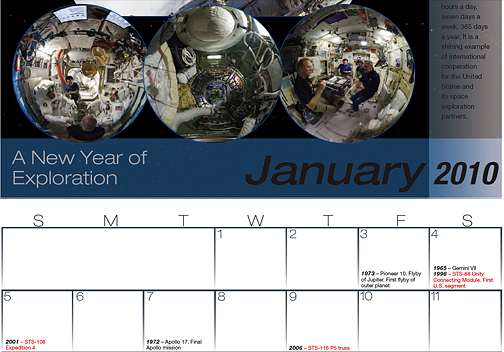