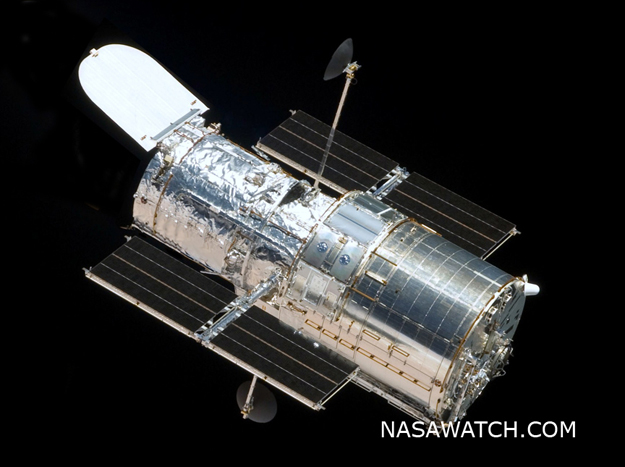 Image: Is this what NASA’s two new telescopes would look like in space?

Just after 11:00 on Monday morning Twitter postings appeared saying that the Washington Post and New York Times were running with parallel stories about how NASA had been given two spy satellites by the National Reconnaissance Office (NRO). After some checking it became clear that NASA had been approached more than a year ago by the NRO with regard to two telescopes (Earth-facing) that were no longer needed and NRO wondered if NASA might have a use for them. Sounds pretty straight forward.

The Hubble Space Telescope has long been known to be a close cousin to the large recon satellites (KH-11, KH-12 etc.) that the NRO had been flying for several decades. They were built by the same contractor, have same general layout, etc. Nothing especially surprising. But as is often the case, NASA has a propensity for taking a simple story and making it needlessly complex. Add in national security implications and it gets messy fast.

I sent inquiries to NASA PAO asking whether there’d be a press release or a media opportunity. The initial answer was that no press release would be forthcoming (NRO said not to issue one) and no media briefing would be held (same excuse). Then, another PAO person sent me emails claiming that he sent me a heads up about this last Friday (not true – never happened) and that this was being unveiled at a National Academies of Science advisory committee meeting at that moment. Then I got an update that there would be a media roundtable at 2:00 pm. I guess that a media “roundtable” is somehow different than a media “opportunity”. From interactions with fellow media it was clear a number of them had no idea this was happening.

Director of NASA’s Astrophysics Division Paul Hertz, his Acting Deputy Michael Moore, and Alan Dressler from the Carnegie Institution for Science participated in the telecon. As the session started, consummate space policy expert Marcia Smith tweeted “Tnx to @NASAWatch for heads up re media telecon re NRO sat. No one told me and I was in same rm as Hertz & Dressler at SSB mtg at 1:59.“. In other words, NASA PAO had botched this whole non-rollout rollout and NASA personnel were clueless as to what was going on. In addition, it became clear that NASA had already provided NASA employees to respond to questions from the Washington Post and the New York Times and not to anyone else. NASA PAO said that they provided answers to inquiries. Sources within the agency tell me otherwise.

The roundtable participants were not going out of their way to offer up information about the NRO hardware. To a certain extent, this is understandable. But if they did not want to get into detail why were they telling advisory committees about it? Paul Hertz’s charts have some very specific details. 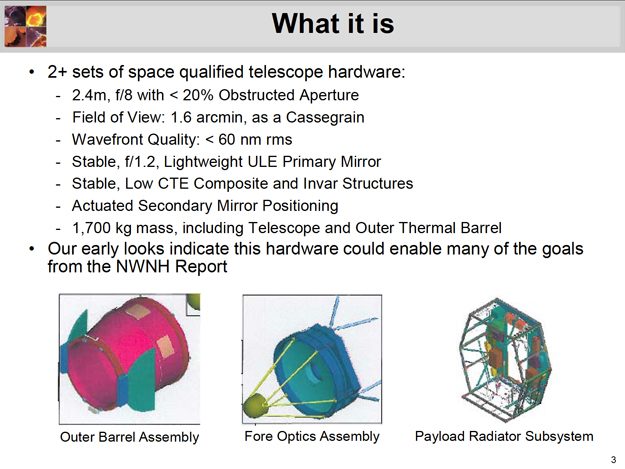 Moore said that the hardware had been “declassified” so that NASA could use it. So, I asked, since it was “declassified”, what the names of these telescopes were and if we could have photos of the hardware. Moore declined to provide the names of the telescopes – or of anything NRO was providing, said that we could not have photos (because things were classified), and that we should go talk to the NRO’s public relations office.

As the questions continued NASA participants eventually added more detail (but only after the media kept pushing on the issue). The hardware was described as being telescopes only – no spacecraft systems. In essence they are tubes that look just like the Hubble with its Mylar coating. One participant referred to them as looking like a “stubby Hubble”. They also said that there’d likely be no photos released until such time as NASA incorporated the hardware into a spacecraft.

The hardware is currently being stored at the manufacturer’s facility (Excelis, part of ITT located in Rochester, NY) at a cost of $75,000 to $100,000 per year. These telescopes were manufactured to be used in space according to NASA. One telescope went through more space qualifications than the other. This hardware was built between the late 1990s and early 2000’s but NRO eventually decided not to use it and has kept it in special storage since that time.

The optics of the telescope are a bit different than Hubble. The primary mirror is shaped with a deeper concave shape – more like a bowl – and the secondary mirror can be adjusted. This allows a wider field of view than Hubble has thus allowing it to see a portion of the sky 100 times larger than Hubble can see with any given exposure. The optics system is also lighter than Hubble’s. These basic factors explain the “stubby” (shorter) shape of these telescopes as described by NASA.

I asked again how NASA referred to this hardware so as to differentiate one from another – i.e. does NASA refer to them as “Telescope A and “Telescope B”? Moore again declined to reply other than to say that they were “thinking of some names”. Again, if things are declassified then can’t we at least know what to call these things? Obviously not.

So – lets collect what we know: these two telescopes are identical, look like Hubble i.e. they are shiny, Mylar-covered tubes with stuff on the ends and a sunshield. If they fly they will have solar panels and antennas attached. It is unlikely that they will be buried inside of some external structure that would totally obscure their tubular shape. In NASA’s own description, they look like “stubby Hubbles”. So why can’t we see photos of them? NASA has already told us what they look like.

But wait. This image was posted on MSNBC captioned “A redacted photo shows one of the telescopes transferred from the National Reconnaissance Office to NASA.” and the source is “A. Dressler via National Academies”. NASA refuses to issue images to the media but they give the same imagery to the NAS and they release it to the media? But NASA can’t? 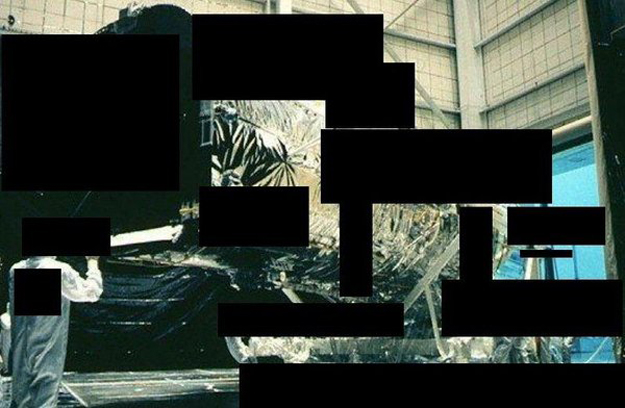 Keith’s 2:00 pm EDT update: J.D. Harrington at NASA PAO tells me “I’m told that this is an old picture of the Hubble Space Telescope in its ground handling fixture being moved in the clean room during integrated testing and is not related to any classified hardware. It was included by the author of the CAA presentation yesterday to provide some levity to his somewhat dry science discussion.” Dressler was on the media telecon yesterday when NASA refused to provide photos. So…. a senior representative of the National Academies of Science (Dressler) is issuing photos that they either claim are authentic and/or know are not authentic – and do so after hearing that NASA cannot/will not release them. This image has since been removed by MSNBC when they were notified by NASA that it was indeed fake. Meanwhile, NASA is holding a semi-stealth media telecon – but only for selected media – and I got 13 minutes advanced notice. Alas, NASA claims that they are not holding “media telecons” about the NRO telescopes and they tell this to media during a “media telecon”.

When this offer was made to NASA, the Science Mission Directorate (SMD) asked around internally within NASA for ideas on what this hardware could be used for – if anything. The answers they got was predictable – give us buckets of money and we can do something with it. Given that no money is likely to be forthcoming, the approach SMD is now taking is to simply accept that the telescope is already designed – and to focus on what can be done with that existing design without making major changes.

NASA has no money whatsoever to use this hardware in it current or projected budgets. Any excess funds that might have been available have already been sucked up by cost overruns by the James Webb Space Telescope. So, right now, any ideas that have been bounced around do not have money attached. I asked Paul Hertz if NASA was focusing only on scenarios where NASA funds would be used or if they were thinking outside the box to include other funders or novel partners. Hertz said that NASA had just started to discuss this. Of course this struck me as a little odd since NASA had been talking to a lot of people internally about this January 2011. Michael Moore jumped in and corrected Hertz to say that this had obviously been discussed but that NASA was just now reaching outside of the agency to have discussions.

Given the tedious interactions with NASA on Monday (they muted the phone twice while they tried to figure out how to answer my questions) it is clear that this is still a partially classified piece of hardware – one with understandably stringent ITAR considerations. If NASA provides too much information about the capabilities of this system then they reveal how it is designed. If they skimp on the details no one outside of NASA will know enough to build instrumentation to use it. In other words, a cosmic Catch-22.

Its sort of like winning a raffle – twice – and you have two shiny new Porches in your driveway. But you cannot show them without risking a visit from the tax accessors but your neighbors cannot help but notice the two new cars. What do you do?

That said, this hardware does provide NASA with an opportunity. They could use it to study things that had been assigned to missions that were never funded or have been cancelled. But the science is not the hard part. Finding a way to pay for the costs associated with use of this hardware is. The challenge to NASA is how to fight its old habits i.e. that everything costs a lot of money and has to be tweaked multiple times toward a single point design that will only be used once.

When the Venus Orbiting Imaging Radar mission was canceled in the early 1980s NASA went thought the left over parts inventory and built Magellan out of parts from the Voyager, Galileo, Ulysses and Mariner 9 programs. They readjusted science objectives to match what this hybrid spacecraft could accomplish. Magellan went on to exceed all expectations.

NASA can do that again if it really wants to. I am not sure that it does. Finding yet another way to feed its marching army won’t work this time. And as NASA tries to get creative with this hardware gift it needs to stop and think about the public face it puts on these activities. Monday’s media interaction was a total failure.