The crucial pressure testing phase for NASA’s pioneer Orion crew test capsule has begun inside the NASA Michoud Assembly Facility (MAF) in New Orleans, Louisiana. It will be subjected to a wide ranging and stringent testing regime by the joint NASA/Lockheed Orion team at multiple different facilities over the coming year to validate the spacecraft design.

“The Orion crew exploration vehicle is capable of supporting missions to low Earth orbit (LEO) and beyond to the Moon and Deep Space,” says Larry Price. Price is the Orion Deputy Program Manager at Lockheed Martin.

Lockheed Martin recently completed construction of the structural framework of this first Orion capsule – known as the Ground Test Article or GTA – at the Michoud facility. I inspected the test capsule at Michoud shortly after the last major segments were welded into shape using state of the art Friction Stir Welding (FSW) processes and machinery. Read my earlier Orion report from Michoud here.

Orion is under construction by Lockheed Martin after being awarded a multiyear contract by NASA worth some $3.9 Billion to manufacture a new, US-built manned capsule capable of launching American astronauts into space.

“Orion is now at the peak of its development phase,” Price told me in an interview.

“The Phase 1 Safety Review was completed in June 2010 and formally acknowledges that Orion’s design meets all of NASA’s critical safety requirements for a human-rated space flight vehicle for flights to LEO and lunar missions. The unanimous safety approval will help minimize the gap in the US human spaceflight capability.”

“The next step after the welds is proof pressure testing of the crew test vehicle to see if any changes or repairs are required,” said Price. Hundreds of testing gauges were installed throughout the cabin during construction to measure the overall vehicle strain.

Technicians delicately uncaged the GTA from the giant clamps that held it in place during the high precision FSW welding operations and have moved the craft into the Structures Test Facility at Michoud.

“The crew cabin is then integrated with all the connectors and sensors required to perform and monitor the tests and acquire the data,” said a Lockheed Martin facility engineer.

“The testing will occur in two stages and demonstrate pressure margin on the vehicle so that we don’t under or over design the vehicles capability,” Price explained. “We will slowly and incrementally raise the pressure to which the cabin is exposed while looking at the data. So we can abort at any point in case of any unforeseen problems. After confirming the results of the first test we’ll proceed to the second stage.”

Instrumentation is monitored during pressure testing to confirm that the vehicle is reacting as expected, that the overall design and all welds are correct and that there are not any deformations outside of prediction.

Initially, the structure will be gradually pressurized to a low-to-mid pressure level to ensure that the simulated hatch and windows and other penetrations are sealed within specification. This testing will provide the engineering team with their first-ever look at the behavior and stresses of the new vehicle.

After analyzing all the data from the sensors, verifying the applied pressures and structural integrity and that all predictions and objectives were met, the test article will be pressurized to a proof test level of about 1.5 atmospheres, which is higher than what Orion will actually see during a space mission.

Upon successful completion of the proof pressure phase, the Crew Module will be transported back to the Orion assembly area for continued outfitting to its final configuration with interior and exterior mass and volume simulators. The effort entails installation of simulated astronauts, cabin instrumentation, the heat shield and other equipment including thrusters, batteries, parachutes and more.

During Fall 2010, the Orion GTA will be shipped from Michoud to the Lockheed Martin space facility in Denver for performance testing to ensure the vehicle can meet the challenges of ascent, on-orbit operations and safe landing.

Inside the acoustic and environmental testing chamber, the crew cabin will be bombarded with acoustic energy and vibrations to simulate flight like environments that correlate the structural milieu inside and outside the vehicle. The tests will determine if the spacecraft structures are properly designed to withstand the harsh rigors of the space environment.

These tests will help validate the cabin design. Lessons learned will then be used to incorporate changes to the tools and manufacturing processes that will finally result in a human rated production vehicle.

All this effort in achieving key milestones is taking place as uncertainty reigns and even as the Orion project has recently suffered a 20% budget cut.

“600 people were moved off the Orion workforce,” Price confirmed to me due to recent NASA directed budget restrictions related to project termination liability. Read my earlier story here.

The future outlook remains cloudy as President Obama and Congress struggle to seek common ground from their vastly divergent viewpoints and strategies on a new way forward for NASA’s space exploration agenda as elements of Project Constellation approaches official cancellation.

A hopeful signal for the Orion team is that both the US House and Senate appear poised to pass bipartisan NASA legislation that would continue funding of a fully capable Orion crew vehicle to reach LEO and beyond. Still, there are significant differences between the two bills which must be ironed out and supported by the Obama Administration.

“The Congressional direction going forward – and thus the spacecraft architecture capabilities – is still to be determined. It is the funding availability which will dictate what functionality is available for Orion and when its available,” Price said to me.

“We will work to provide Low Earth Orbit (LEO) and ISS rescue capability early. And then add capability for deep space as the budget allows. So its an incremental capability approach. We will get the basic Orion capability flying first – to minimize the absence of a US crewed capability – and then upgrade as funding permits,” Price explained.

“We are very pleased to see strong bi-partisan support in Congress for the nation’s human exploration program and recognition of the significant progress that has been made in developing Orion in just four years,” said John Karas, Lockheed Martin vice president and general manager, Human Space Flight. “We commend the cooperation between Congress and the Administration in achieving this important step to assure continued U.S. leadership in space.”

Lockheed Martin still aims to launch an Orion into low earth orbit by 2013, given appropriate funding.

Stay tuned for the ongoing vigorous debate on the NASA budget between the Obama Administration and the US Congress which will set the future direction of America in Space for decades to come. 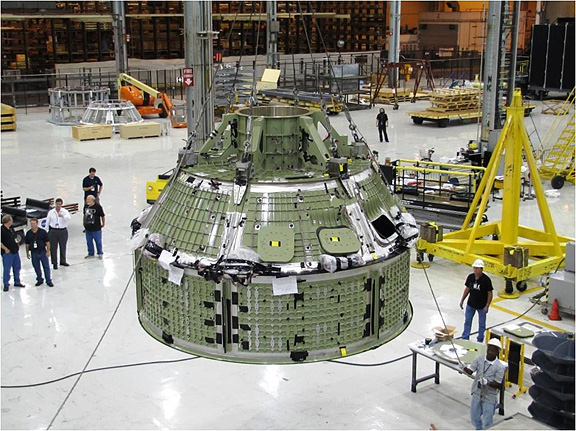 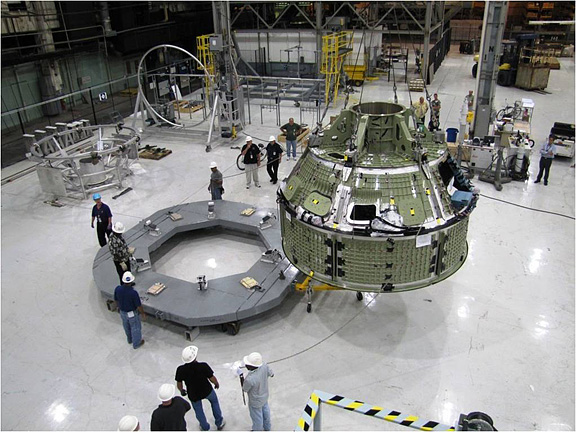 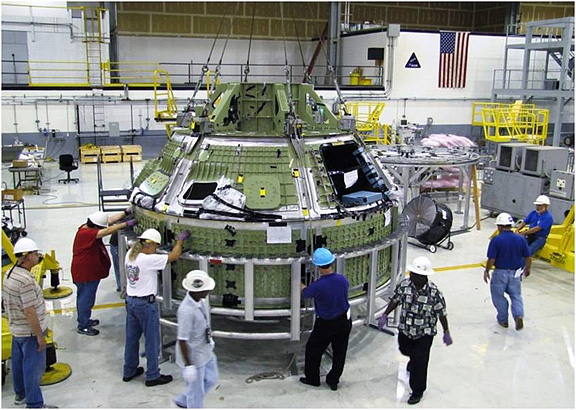 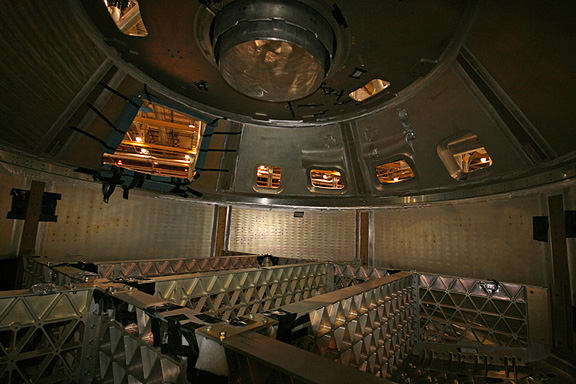 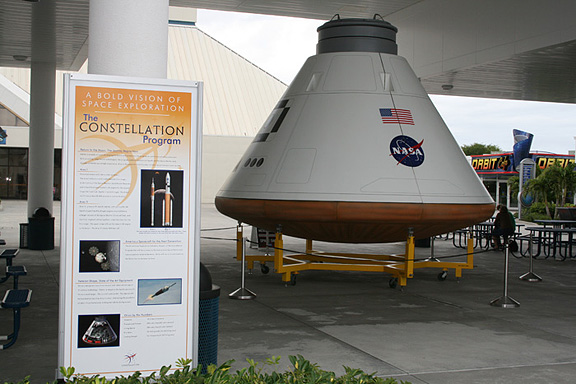 Mock up of the Orion Capsule at the Kennedy Space Center Visitor Center. Credit: Ken Kremer