The last two Space Shuttle External Tanks (ET’s) likely to be produced in history are entering their final closeout assembly operations at the NASA-owned Michoud Assembly Facility (MAF) in New Orleans as the shuttle program draws ever closer to its looming retirement date, now reset to early 2011.

These two final tanks are destined for the last scheduled flight of the shuttle program – STS 134 – and what’s currently base lined as the Launch-On-Need (LON) rescue mission (STS 335), respectively. They are designated as tanks ET-138 and ET-122. STS 134 is currently scheduled to lift off on Feb. 28, 2011.

I had the rare opportunity to inspect these final ET’s up close (see photos below) during my tour of NASA’s new Lunar Orion Ground Test Article (GTA). Read my Orion reports here and here.

The giant tanks play a dual role. First, they supply the super cold cryogenic propellants – liquid oxygen and liquid hydrogen – to fuel the Orbiters three main engines during the thunderous ascent to orbit. Second, they provide the structural backbone to the shuttle system by absorbing most of the seven million pounds of thrust exerted by the solid rocket boosters and main engines.

The tank work is taking place amidst great uncertainty for all the aerospace workers employed on the Space Shuttle Program at Michoud and at all other NASA and shuttle contractor locations across the US.

Massive job cuts in the tens of thousands are set to occur as the Shuttle program is ended and as the termination of NASA’s follow on Constellation moon program, which would have employed some of these folks, was recently accelerated by the Obama Administration. Indeed many thousands of shuttle contractor workers have already been layed off.

Until recently, Michoud was a beehive humming with construction activity for our nation’s space program. Now it’s almost like a ghost town, sadly foreshadowing the coming demise of the shuttle program as the ET manufacturing lines have been shut down. More than 1000 layoffs have already taken place at Michoud even as the US remains in the grip of the worst economic recession since the Depression.

ET manufacturing is the main activity at Michoud and the facility was one of the largest industrial employers in the New Orleans area, now further battered by the economically devastating effects of the BP Gulf oil spill.

Lockheed Martin Space Systems manufactures the huge ET’s at Michoud under a contract from NASA that was awarded in 1973. These last tanks are being assembled under a contract that extends through 2010. To date, three test tanks and 132 flight tanks have been delivered to NASA.

“We are down to about 1200 employees from a total of about 2200 working at Michoud. And, we are on a rapid decline,” Lockheed spokesman Kevin Barre told me. “Layoffs started about one year ago. There is still no direction from NASA on the future of the facility. The ET weld tools are now covered and in storage. They belong to NASA”.

Most of the current tank work is focused on ET-138, with three shifts working diligently around the clock in the Test & Checkout Building, # 420. Test & Checkout is the final stop for an ET during build before being rolled out to the shipping barge to KSC.

During my visit, expert teams of highly experienced and dedicated personnel were busily working on the umbilical connections, foam modifications, feed lines, ice frost ramps, electrical lines and much more as I stood in awe on top of the wraparound scaffolding, just inches from the giant yellow tank positioned hoizontally on the shop floor and which stretches 154 feet in length and 27.6 feet in diameter and a mere one half inch thick.

See my ET-138 photos below and 360 degree panoramas courtesy of Nasatech.net: http://nasatech.net/

I was lucky to stride back and forth along the tank where very few folks are permitted, from the nose cap of the tank to the rear and also gaze straight at the two complex and rectangular shaped umbilical plate assemblies containing the critical oxygen and hydrogen feed lines which are coupled directly to the rear of the orbiter during launch.

Panorama from bottom of ET-138 near umbilical plate assemblies

Panorama near top of ET-138 next to fuel feed lines

Lockheed is targeting to complete ET-138 around June 29. ET-138 will then be transported about one mile to the sites deep-water access port and placed aboard a barge named Pegasus.

A delivery celebration of sorts is planned for July 8, although for many of those fortunate to still be employed it may harken to a somber funeral procession.

“There will be a New Orleans second line with a jazz band following the tank to the barge!,” according to Lockheed spokesman Kevin Barre.

The “Second line” is a “quintessential New Orleans art form — a jazz funeral without a body”. Second line is a New Orleans tradition where participants follow the brass band and enjoy the music with a parade of traditional dance and twirling parasols and handkerchiefs.

The tanks are then towed on the barge for a 900 mile voyage across the Gulf of Mexico, around Florida and up to the Kennedy Space Center on a trip lasting five or six days. NASA officials are in the process of determining whether the catastrophic BP oil leak in the Gulf will affect the timing or the route of the barge. There were some minor adjustments to the path of the barge on the prior ET shipment.

These tanks are the newest version dubbed the Super Lightweight Tank (SLWT), weighing some 58,500 pounds. They are 7,500 pounds lighter than the prior Lightweight Tanks (LWT) because of the use of a significantly stronger and less dense aluminum lithium alloy.

The weight savings with the SLWT translates directly pound for pound to an increase in the shuttle’s payload capacity to orbit and was vital for enabling the shuttle to loft the heavier components required to build and supply the International Space Station. The first SLWT lifted off on 2 June 1998, powering STS 91 into orbit.

The Michoud facility sits on an 832 acre property in eastern New Orleans. It features one of the largest manufacturing plants in the world, encompassing over 43 acres under one roof and a deep water access port which is a necessity for the transportation of large space structures via ocean-going barge.

Everyone I spoke with at Michoud wished the program would continue but sadly realizes that it won’t. They are uniformly proud of their accomplishments and their role in supporting the US Space Program.

The ET teams motto is “The Last One will be the Best One !”

They are a highly dedicated lot. Half the folks at Michoud lost their homes during Hurricane Katrina and pushed on with the work despite the terrible aftermath and kept the shuttle program running on schedule.

One employee said to me, “In addition to aerospace workers, there are a whole lot of regular working folks from the community who contribute to the program, in many different ways. I’m always amazed at what a great job local, family-owned contractors are capable of when becoming involved with our space programs.”

“It helps to put into perspective where the funding for these programs really goes. I get the impression some times that the public has the idea that billions of dollars are actually loaded into a rocket and blasted into space, never to be seen again. They don’t seem to notice the regular folks, like steel workers, carpenters, electricians and pipe fitters, their suppliers and equipment vendors, who all participate in and benefit from these kinds of programs. They are all very much part of the space program too, although if you’re up to your elbows in a mud pit, you probably don’t feel much like an astronaut.”

NASA has done studies on what it would take in terms of time and money to restart the ET production line, but that study has not been released to the public.

Senior NASA shuttle managers have told me that it would take roughly 2 years from the date the order was placed to produce the first new tank. In the meantime, there are numerous “piece parts” for one to two tanks currently sitting on the floor at the facility which could be assembled together and which I personally saw.

NASA and Lockheed are also working together at Michoud to repair ET-122 which was heavily damaged during Hurricane Katrina.

Watch for my upcoming feature on observing the restoration of ET-122.

ET-122 will be stacked for the contingency mission STS 335 along with Orbiter Atlantis and the last SRB’s which recently arrived at KSC in late May. Read my features on the last SRB’s and Atlantis last flight and tribute here: 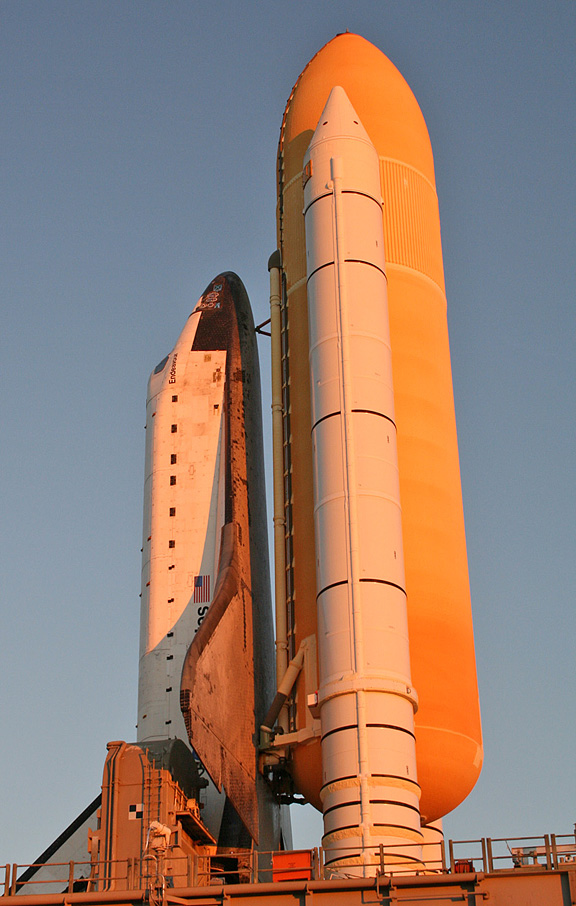 Shuttle Endeavour up close and stacked with ET and SRB’s for STS 130. Note the external liquid oxygen fuel line and pressurization lines running along side of ET and umbilical attach points to orbiter at bottom of tank which carry fluids, gases, electrical signals and electrical power between the tank and the orbiter. Propellants are fed to orbiter engines at 1035 gallons per second. Credit: Ken Kremer 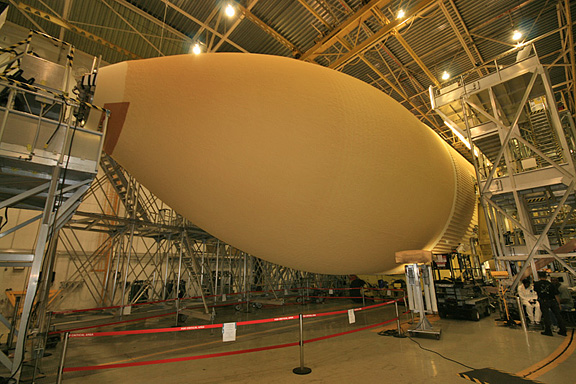 Ogive shaped nose section of ET-138 at Michoud holds forward liquid oxygen tank on top of aft liquid hydrogen tank and connecting intertank – surrounded by scaffolding. ET-138 will fuel STS 134 flight to orbit and is the last scheduled mission in the Space Shuttle Program. Tanks are 154 ft long and 27.6 ft in diameter with a capacity of 537,000 gallons. Credit: Ken Kremer 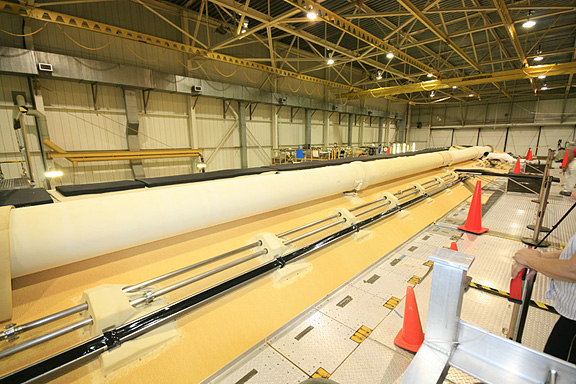 View along the side of ET-138 from rear, and on top of wraparound scaffolding, shows the 70 ft long and 17 inch diameter external liquid oxygen feed line (white) and two 5 inch diameter pressurization lines with multiple ice/frost ramps. Credit: Ken Kremer 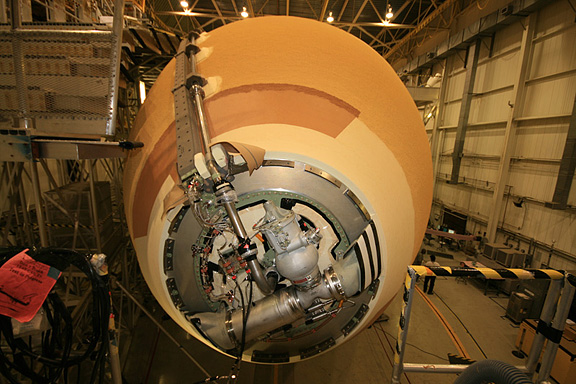 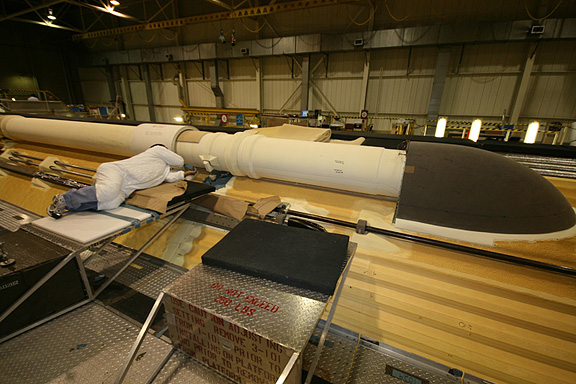 Technician on access platform at top of scaffolding works on the liquid oxygen feed line which runs along side of ET-138 and conveys fuel into orbiter through the aft right umbilical assembly. Credit: Ken Kremer 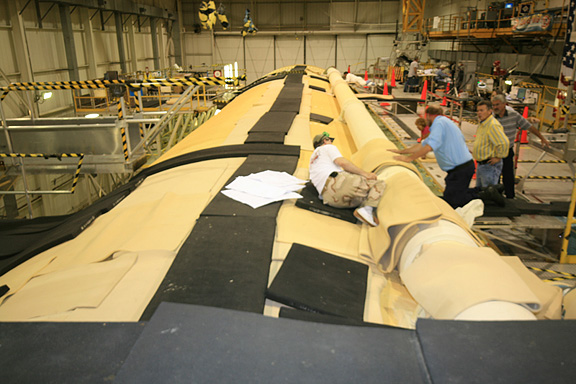 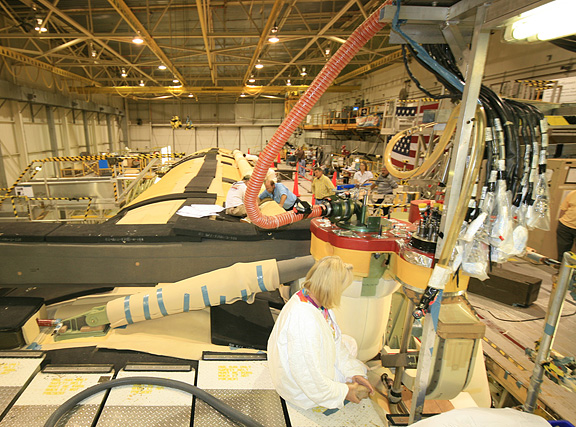