NASA has refined its plans for a return of humans to the moon. How it plans to do so is contained in its Lunar Architecture which is currently under development.

Speaking to reporters on Thursday, Exploration Systems Mission Directorate (ESMD) Deputy Associate Administrator Doug Cooke and others gave a preview of several presentations they would be making at an AIAA conference that afternoon.

According to Cooke, “this has been an ongoing effort for more than a year starting in June 2006”. In so doing, NASA involved a wide range of scientific, international, and commercial interests in these studies.

An early look at what NASA was thinking is contained in the 2005 Exploration Systems Architecture Study (ESAS) Final Report – specifically, Section 4.0 of that report.

Throughout 2006 NASA took this ESAS work and other activities and distilled six common areas of interest. As defined by NASA they are:

NASA’s intent over the past several years has been to build an architecture that best addressed these six goals. To date this has resulted in a plan to build a permanent outpost at one of the lunar poles with the ability to do sortie missions elsewhere on the lunar surface.

According to Cooke NASA plans to build and end-to-end transportation infrastructure and other systems needed on the Moon – but said that it would entertain collaborative participation in other portions of the program. He referred to this approach as being an “open architecture”.

In the past year NASA has sought to put more fidelity into this architecture – specifically the surface infrastructure. There was also an attempt to get at the implementation of various science priorities.

Some conclusions were arrived at after these studies progressed. NASA looked at 6 variants of options for assembling a lunar outpost:

Out of these trade studies came some obvious conclusions. Lunar surface habitats will now be brought down in a few flights rather than many flights. A pressurized rover capability will be provided early so as to allow crews to explore the surface sooner. NASA also looked at having larger mobility capability – including the moving of habitats – perhaps even driving habitats to other locations.

While nuclear power has some attractive aspects solar power will be kept as the prime power source.

Lunar lander studies recommended that the future Ares V launch vehicle have its payload shroud diameter increased from the current 8.7 meters to 10 meters. This would allow a wider, shorter lander design to be used. Among other things this lowers the lander’s center of gravity closer to the ground, some that ESMD’s Geoff Yoder says is desirable.

Among the key drivers for lunar activity will be science. According to Laurie Leschin “we looked at various design reference payloads to do early science on the moon.” She said that she and her team feel that a lot of great science can be done on the moon. “We looked at sorties – and how science may drive them” she said.

Astronaut (and diver) Michael Gernhardt has been involved in human systems research with regard to the suits and other tools humans will use on the lunar surface. He said that his team saw their task as “Moving beyond Apollo” in terms of what can be done on the surface by humans.

The entire Apollo experience on the lunar surface did less than 20 EVAS – with no more than 3 per mission. The Space suit that was used had extreme limitations, Gernhardt said that he was looking for a low overhead EVA system – “one that is a pleasure to work in”. He added “Right now our space suit systems are difficult just to get out the door”.

With longer surface times comes the need to protect crews from a variety of potential hazards – solar proton events for example. “We will only have 5 minutes warning before the radiation arrives” he noted. Gernhardt said that NASA was looking to use a water shield as a defense against solar protons. NASA would also use water as part of heat rejection systems as well. “So we never really lose any water.”

The ability for astronauts to drive across the lunar surface will need to be enhanced as well. The unpressurized Apollo rover had a limited range of 10-15 km. “We need to extend that range to optimize science return” Gernhardt said.

“We looked at large pressurized rovers – basically habitats on wheels – over 8,000 kg in weight. Due to launch constraints we can only get one up there. We’ll be limited to a range of 240 km since you need to get back to the ascent stage [if the rover fails]. We came up with a very small pressurized rover not much larger than Apollo unpresurized rover.” This will have a pressurized compartment up front with the suits attached to it “we’ll step into the suits and then walk out onto surface.”

These rovers would operate in pairs. If one should fail, the other could take all of the astronauts back to their base. The basic plan would be to drive out to the maximum distance and then work backwards to base.

When asked if these various lunar base components would be linked up together first on Earth, Doug Cooke said that these interfaces would be tested. As for operational analogs for a lunar base on Earth (in polar or desert environments) where various aspects of operating a lunar base could be tried out, Cooke said that their planning had not reached that point – yet – but that they had already added some lunar architecture-driven tasks to the just-completed Desert Rats activity just outside Flagstaff. 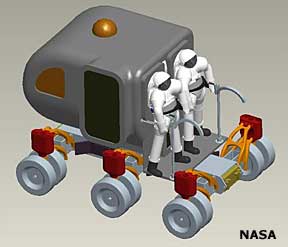 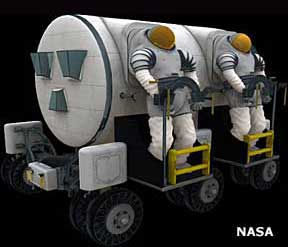 NASA also conducted a 10 km “walk back” experiment at the Haughton Mars Project Research Station on Devon Island this past summer that involved simulating the activities that an astronaut might have to undergo if they had to walk back to their base from a disabled rover.

Laurie Leshin added that a joint ESMD/SMD analog working group had been assembled and that they were looking at “how to inject additional science into existing analogs” so as to derive output for lunar base planning – and for the science to be done on the Moon.

Hen asked if an “open architecture” also mean that common standards would be used – ones that are widely tested and accepted by participants from other countries and the private sector, Cooke said that this had already been widely discussed and that it is intended that open standards would be used to make systems more easily interchangeable and repairable.

As for a specific location for the lunar base, while often mentioned, Shackleton crater is just a candidate right now since some lighting studies and other research still needs to be done.

Cooke stuck with NASA’s date of 2020 for a return of humans to the moon although Mike Griffin has suggested 2018 was an outside possibility. Of course, the architecture is in such a preliminary state that no cost figures were offered by Cooke and his fellow briefers.

Indeed, it is difficult to get anyone from NASA to talk about this architecture without hearing them toss in “point of departure” and “notional” as constant reminders that little of what they are discussing has been set in stone – yet.