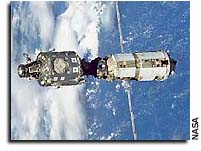 [28 Jan 2000] Skipping the formality of a press release, NASA has quitely acknowledged that it is planning for a long delay in the launch of the Service Module.

This can all be found at the bottom of NASA’s 27 January 2000 Space Shuttle Status Report wherein NASA finally confirmed plans that were first reported on NASA Watch a month ago – plans meant to deal with the reality of a FGB that will soon exceed its certified on-orbit performance, and a Service Module launch certain to be delayed (yet again) by the better part of a year.

According to the shuttle status report:

“To preserve an option to fly an additional Space Shuttle mission this year to perform maintenance on the International Space Station, Shuttle and Station managers today decided to formally plan a revision to the content of Shuttle mission STS-101. The planning will allow the orbiter Atlantis to visit the Station in April if needed, ahead of the arrival of the Russian Zvezda service module, to perform maintenance. However, managers could decide as late as March to return to the original planned content for STS-101 and eliminate the added mission based on the launch date selected for the Russian Zvezda service module by the Station program.

The option including a Station maintenance flight would distribute the original content of STS-101 between two Shuttle missions. The first mission, now targeted for launch no earlier than April 13 aboard Atlantis, will retain the STS-101 designation but be a 10-day long flight to perform maintenance on the International Space Station’s Zarya and Unity modules. The second mission, which would be designated STS-106 and remains under review by managers, would be a Zvezda module outfitting mission that would dock with the Station about one month after Zvezda’s launch. “

This is in close agreement with the 17 December 1999 Protocol 2A.X Contingency Meeting (complete text with attachments) posted on NASA Watch late last year.

According to this document:

“The parties met on Dec 13 through 17 to discuss the possibility of a contingency mission to ISS to repair the FGB and to extend its on orbit life in the event of a further delay of the SM launch date… The parties agreed to begin the development of a contingency mission labeled 2A.2A to protect for the possibility of a further delay of SM launch. It was agreed that if the SM launch is delayed to May or later, then an additional mission (2A.2A) will be planned for March 16. The purpose of this mission will be to repair equipment on the FGB, take measures to extend its’ service life to Dec. 2000, and to perform activities planned for the original 2A.2 mission in that general order of priority. After SM launches, a revised 2A.2 mission will be flown. This launch will be scheduled for no earlier than July 8 and will be designated 2A.2B. “

Much of this contingency planning depends, of course, upon the actual launch of the Service Module. Russia has been saying late July/early August 2000 for a week or so. A 10 February General Designers Review (GDR) meeting between NASA and Russia in Moscow and the Station Joint Program Review (JPR) on 11 February will set a launch date for the Service Module.