NASA Pre-Countdown Update only has Weather as a Potential Issue

Kennedy Space Center – At today’s NASA pre-countdown briefing NASA Test Director Jeremy Graeber said that there currently is no technical issues while a potential severe thunder storm coming through Thursday is the only issue at this time that could delay the shuttle launch.

Shuttle Weather Officer Kathy Winters said the weather is looking good for Friday’s launch attempt but that NASA was monitoring a potential severe thunder storm expected to come through on Thursday evening. The storm could delay the rollback of the Rotating Service Structure early Thursday evening. With lightning and potential heavy rain NASA must think of the safety of its workers on the pad first, said Graeber. However NASA has some built in time in their schedule so even if the storm does come through as expected and as long as the delay is not too long, the launch countdown could resume again for an on time launch Friday.

Once that storm moves through weather is not expected to be a major issue the next couple of days. Currently Winters says there’s only 20% chance of violation of launch constraints for Friday’s launch attempt.

This is good news for the huge crowds which are expected for this, the next to last shuttle launch. Along with the huge crowds NASA is also expecting some special guests including President Obama and the first family as well as U.S. Representative Gabrielle Giffords (D-Ariz.), the wife of Endeavour’s commander Mark Kelly. 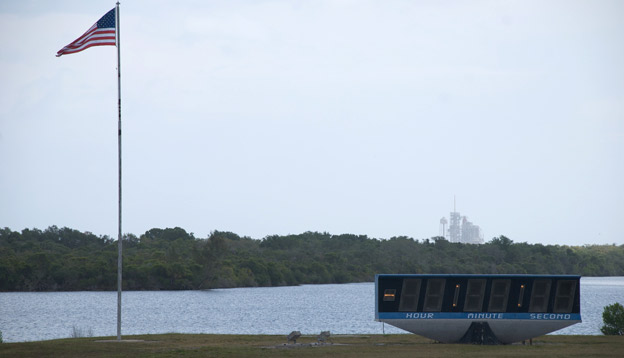 Technicians are closing Space Shuttle Endeavour’s payload doors today and shortly after noon today the six shuttle crew members are expected to arrive in their T-38 training jets at the Kennedy Space Center after leaving Houston earlier in the day.

NASA will conduct its “call to stations” at 1:30 p.m. eastern today and if everything is good to go then the countdown clock will begin at 2:00 p.m at the T-minus 43 hour mark for a launch attempt on Friday at 3:47 p.m.