The artwork was designed in tribute to the Space Shuttle Program as the three remaining Orbiters edge ever closer to their looming retirement date now slated for early to mid 2011 and coinciding with the 30th anniversary of the first launch.

The LCC is the ‘brain’ for Shuttle Launch Complex 39 from which all the Orbiters have blasted off for their journeys to the High Frontier. The four story building is connected to the east side of the iconic Vehicle Assembly Building and was built in the 1960’s for Project Apollo.

Mike Leinbach, the Shuttle Launch Director at KSC, led the project to create the murals by working together with the NASA and contractor teams who personally and jointly process the Orbiters for flight. Leinbach is the person responsible for giving the final “GO” for launch during the countdown inside Firing Room 4 of the LCC.

The murals depict the magnificent accomplishments of the 132 shuttle missions launched thus far as well as a memorial remembrance of the Columbia and Challenger crew tragedies.

“The mural tributes were a labor of love,” Leinbach told me. Leinbach has led the Launch Team for all Shuttle missions since being named Launch Director in August 2000.

Each mural is a 3 D collage fashioned from objects and images which highlight significant milestones and events from the actual space voyages of the individual Orbiters.

“I really wanted something permanent in the Firing Room to honor the Orbiters and their legacies, the processing teams, and the launch team. The Discovery, Atlantis, and Endeavour teams designed their own – with some tweaking from me,” Leinbach explained to me.

“I designed the Columbia and Challenger displays. They are all different in the details, but with some common themes across them,” he added.

The first mural completed was the one for Shuttle Atlantis in May. It was mounted on the wall of Firing Room 4 inside the LCC just days prior to the last scheduled blast off of Atlantis on the STS 132 mission on 14 May 2010.

I was quite fortunate to go on a rare media visit inside Firing Room 4 – where access is highly restricted – during the STS 132 mission in order to observe the Atlantis mural first hand, courtesy of Mike Leinbach and NASA Public Affairs Officer Candrea Thomas.

Read my prior report about Atlantis from the LCC Firing Room here and my accounts of the STS 132 mission here and here.

The remaining four tribute murals were recently mounted beside Atlantis mural inside the LCC, and directly above the computer consoles of the flight control team who conduct the three day launch countdowns.

Leinbach generously sent me all the mural artwork and complete Orbiter descriptions to share with the public at large, since very few people actually have access to the Shuttle Firing Room inside the LCC. It is not known at this time if the murals will be put on display at other facilities or museums.

All five Orbiter murals and their full descriptions are reproduced here especially for this article by permission of Shuttle Launch Director Mike Leinbach and NASA.

“We have descriptions for each mural so people can read what each tribute means,” Leinbach told me. Television and web viewers will recognize Firing Room 4 as the location they see during the launch countdowns and which shows the NASA Launch directors and flight controllers working intently at their consoles and monitoring myriads of launch related systems and parameters vital for safely conducting a space lift off.

“We added lighting below each tribute in the Firing Room so they would really stand out. And the 3-D effect is enhanced with the lighting, too,” said Leinbach.

Each mural is adorned with all the mission patches flown by that Orbiter, including the two approved remaining flights STS 133 and STS 134. The patches for Challenger and Columbia lead toward portrait remembrances of the seven person crews that perished in the shuttle accidents in 1986 and 2003 respectively which destroyed the Orbiters.

NASA’s entire fleet of shuttle orbiters were named in honor of pioneering sea vessels which established new frontiers in Mankind’s quest for scientific research and exploration. The orbiters carried on the spirit of ‘Sailing Vessels for Science’.

“Some of the background star field and planetary images come from probes the Shuttles deployed,” Leinbach explained to me.

The legendary Planetary and Astrophysics science probes deployed by the Orbiters include the Hubble Space Telescope (1990), the Galileo Jupiter Orbiter (1989), the Magellan Venus Radar Mapper (1989), the Ulysses Solar Probe (1990), the Compton Gamma Ray Observatory (1991) and the Chandra X-Ray Observatory (1999). These breakthrough science missions completely altered our understanding of the creation and evolution of the Universe and our view of our place in the Universe.

Many dedicated science missions were also carried aloft by the Orbiters using experimental gear packed inside the shuttle crew cabin and payload bay aboard the Spacelab modules provided by international partner countries.

Endeavour’s mural is dominated by the recently installed Cupola Observation Dome. Discovery has flown the most missions. Atlantis flew the final servicing mission to upgrade and rejuvenate the Hubble Space Telescope to the apex of its scientific capability.

Columbia – “First of the Fleet” – was the initial flight orbiter built and inaugurated the Shuttle Era when it lifted off on April 12, 1981 with Shuttle Commander John Young (who walked on the Moon during the Apollo 16 flight) and Shuttle Pilot Robert Crippen and orbited the earth for 37 times. Only two more flights remain to launch; STS 133 on November 1and STS 134 on February 26, 2011.

Congress may fund one additional flight, STS 135, which could fly in June 2011. NASA has all the components to fly STS 135, pending Presidential approval. Read my article here.

Thereafter the orbiters will be retired and rest forever on display in museums despite the fact that they could usefully fly for many more years but for a lack of federal funding. The shuttles are safer now than at any point in their 30 year flight history according to top NASA managers. Discovery is assigned to the National Air & Space Museum. Locations for Atlantis and Endeavour have yet to be chosen. 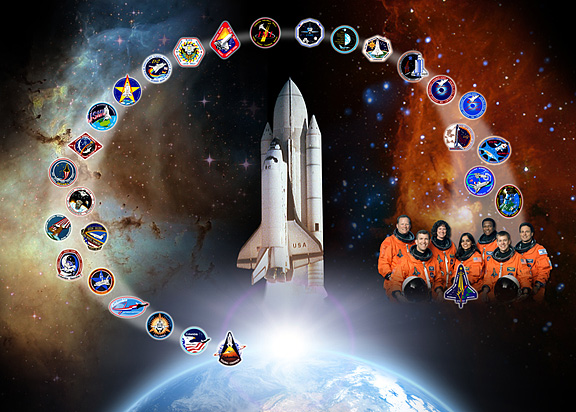 Columbia: This Tribute Display features Columbia, the “first of the fleet”, rising above earth at the dawn of the Space Shuttle Program. Crew-designed patches for each of Columbia’s missions lead from earth toward our remembrance of the STS-107 crew. In the background are images from the Chandra X-Ray Observatory (launched aboard STS-93) representing Columbia’s contributions toward scientific discovery. Other significant accomplishments include the first space shuttle landing at White Sands with STS-3, first deployment of commercial satellites during STS-5, first four-member crew on STS-5, first Spacelab mission and first six-member crew on STS-9, first female mission commander (Eileen Collins) on STS-93, as well as multiple laboratory missions–many with international partnership. Credit: NASA 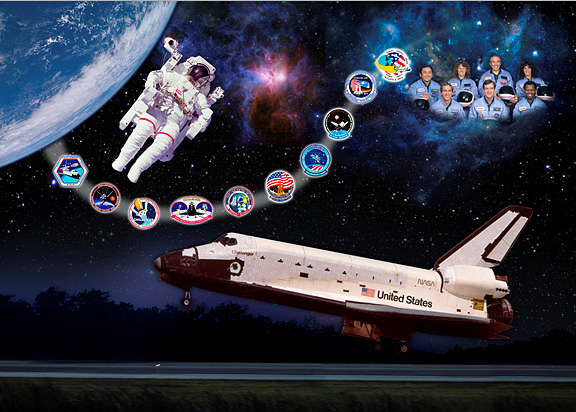 Challenger: This Tribute Display features Challenger, which blazed a trail for other vehicles with the first night landing (STS-8) and also the first landing at Kennedy Space Center (STS-41B). The spacewalker represents Challenger’s role in the first spacewalk during aspace shuttle mission (STS-6) and the first untethered spacewalk (STS-41B). Crew-designed patches for each of Challenger’s missions lead from earth toward our remembrance of the STS-51L crew. Other significant accomplishments include the first night launch with STS-8; the first in-flight capture, repair, and redeployment of an orbiting satellite during STS-41C; the first American woman in space (Sally Ride on STS-7); the first African-American in space (Guion Bluford on STS-8); and the first American woman to walk in space (Kathryn Sullivan during STS-41G). Credit: NASA 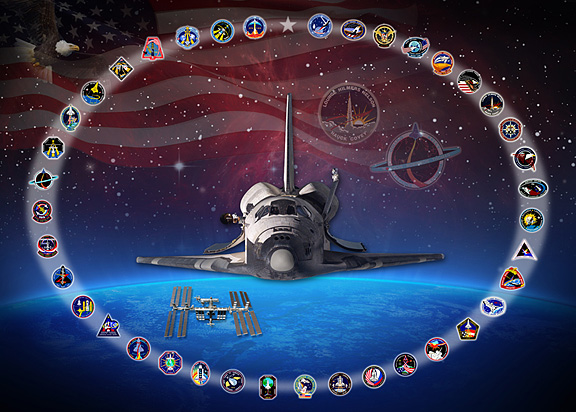 Discovery: This Tribute Display features Discovery demonstrating the renowned Rendezvous Pitch Maneuver on approach to the International Space Station (ISS) during STS-114. Having accumulated the most space shuttle flights, Discovery’s 39 mission patches are shown encircling the vehicle. The background image was taken from the Hubble Space Telescope, which was launched aboard Discovery on STS-31 and serviced by Discovery on STS-82 and STS-103. The prominent American flag and eagle represent Discovery’s two “Return to Flight” missions, STS-26 and STS-114, and symbolize Discovery’s heroic role in returning American astronauts to spaceflight. Discovery’s significant accomplishments include the first female Shuttle pilot (Eileen Collins on STS-63), John Glenn’s legendary STS-95 mission, and the celebration of the 100th space shuttle mission with STS-92. In addition, Discovery supported numerous Department of Defense programs, satellite deploy/repair missions, and 13 flights for construction and operation of the ISS. Credit: NASA 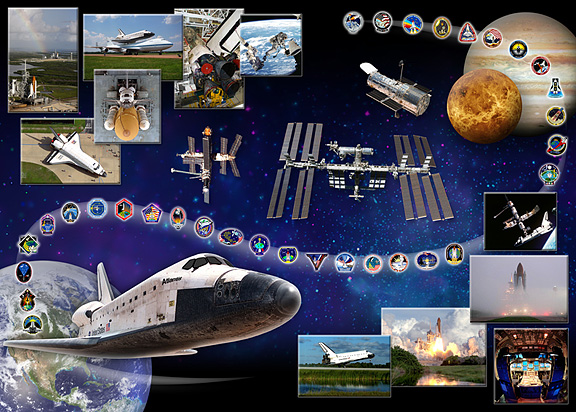 Atlantis: This Tribute Display features Atlantis soaring above the earth. Atlantis flew seven missions to space station Mir. In addition to its many assembly, construction, and resupply missions to the International Space Station, Atlantis also flew the last Hubble Space Telescope servicing mission on STS-125. The planet Venus represents the Magellan probe deployed during STS-30, and the planet Jupiter represents the Galileo probe deployed during STS-34. Threaded through the design are the mission patches for each of Atlantis’ flights. The inset photos illustrate various aspects of space shuttle processing as well as significant achievements such as the “glass cockpit” and the first shuttle docking with Mir during STS-71. The inset photo in the upper left corner shows a rainbow over Atlantis on Pad A and Endeavour on Pad B. Endeavour was the assigned vehicle had Atlantis’ STS-125 mission needed rescue, and this was the last time both launch pads were occupied simultaneously. The stars in the background represent the many people who have worked with Atlantis and their contributions to the vehicle’s success. Credit: NASA 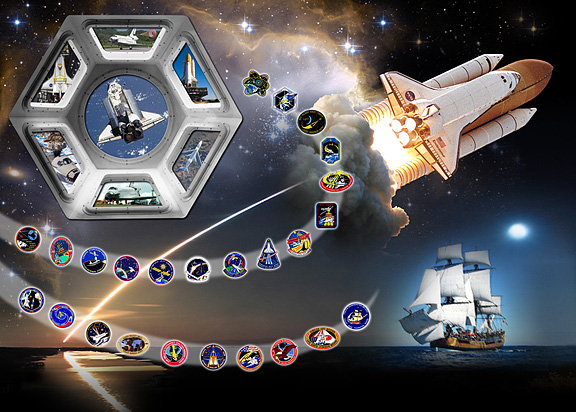 Endeavour: This Tribute Display features Endeavour soaring into orbit above the sailing vessel HMS Endeavour for which the orbiter was named. The Cupola, delivered to the International Space Station by Endeavour on STS-130, is shown framing various images of Endeavour. The images represent the phases of mission processing and execution for the Space Shuttle Program. The first ever use of a drag chute during orbiter landing (STS-49) is depicted in the top window and moving clockwise the images symbolize the following: Rollout to the Pad, Ferry Flight return to Kennedy Space Center, Orbiter Processing Facility Roll-in, Docking at the International Space Station, and Lifting Operations for Orbiter Mate in the Vehicle Assembly Building. The background image was captured by the Hubble Space Telescope and signifies the first servicing mission which was performed by the Endeavour crew on STS-61. Crew-designed patches from Endeavour’s maiden voyage through her final mission are shown ascending toward the stars. Credit: NASA 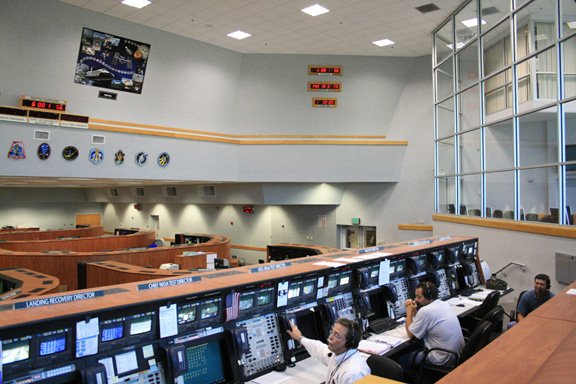 Shuttle flight controllers work at consoles inside Firing Room 4 of the Launch Control Center (LCC) with the newly mounted 3 D Mural for Shuttle Atlantis. About 125 people are on console monitoring shuttle, payload and flight critical systems during a lift off. Shuttle Launch Director Mike Leinbach gives the final “GO” for launch in this room only if all systems are nominal. Credit: Ken Kremer 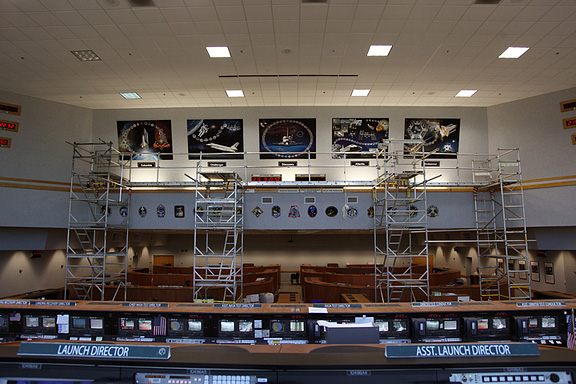