Meteorite Found to Contain Water From Our Solar System’s Infancy 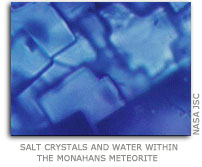 Scientists at the University of Manchester and the Natural History Museum in London have found salt crystals containing brine water inside a meteorite Radioisotope dating shows that the crystals formed within 2 million years of the birth of our solar system. The findings of this team were published in the 9 June 2000 issue of Science magazine.

The implications of this discovery are rather profound. First, it would indicate that the dust and gas from which our solar system coalesced began to clump together much sooner than was previously thought. Secondly, it would seem that the conditions (or at least the prime ingredients) required for the origin of life may have existed at a very early period of solar system formation.

The “Zag” meteorite, so named for having landed near Zag, Morocco in August 1998, originally weighed around 175kg. The Monahans meteorite landed in Texas on 22 March 1998. Both are thought to have originated from the same, larger, parent body. Asteroid 6 Hebe (classified as being an S(IV)-type asteroid) is often suspected as being the probable parent body of the H-type ordinary chondrites (such as Zag and Monahans). Asteroid 6 Hebe has an estimated diameter of around 120 miles. Its orbit is resonant with that of Earth, thus providing a rather efficient means of sending fragments on Earth-crossing trajectories toward Earth.

Since the Zag meteorite landed, pieces have shown up for sale around the world. Zag is classified as an ordinary chondrite meteorite and was once part of a larger body blasted apart some 300 million years ago. Zag is a breccia, a fragmented rock composed of angular pieces cemented together by a fine-grained matrix. Its parent body contained rocky material, salt crystals, water ice, and radioactive isotopes.

The Manchester team hypothesizes that the decay of the radioactive material within the original parent body provided enough heat energy such that the water ice present melted and evaporated, leaving the salt crystals (formed of sodium chloride or ‘halite’) behind. Within these halite crystals are very small pockets or “inclusions” that contain water.

It was important for the research team to be certain that this water was not a terrestrial contaminant. They were able to confirm the extraterrestrial origin of the water by measuring Xenon, Iodine, and Argon isotopes contained within the halite crystals. A large amount of Xenon-129 was found. Xenon-129 forms when Iodine-129 decays. While Iodine-129 was in existence in the early solar system, it is not found on Earth today. Once the amount of Iodine-129 was determined it was a straightforward process to see how much of it had decayed into Xenon-129. Since this happens at a rather precise rate (the half life of Iodine-129 is 15.7 million years), the researchers were able to date the salt crystals as being 4.57 billion years old. This confirmed the assumption that the halite had indeed formed in space a very long time ago.

In addition to instigating some revised thinking about the rate at which the solar system formed, a change in conventional theory within meteoritics is also possible. Until this discovery, the oldest known materials in the solar system were thought to be chondrules. Chondrules are spheres of glass which comprise a portion of chrondritic meteorites, a class of meteorites thought to be among the most primitive known. Chondrule formation is thought to have happened for the first 5 million years of solar system formation. The findings regarding halite crystals within the Zag meteorite suggest that it may be from an even earlier time.

Astronomers have suggested that much of the water present on Earth is the result of innumerable cometary impacts. Differences between the water found in comets and on Earth has left some problems with this theory. With the discoveries within the Zag and Monahans meteorites, it now seems that there was an additional source of water for the early Earth.

° 9 June 2000: Extinct 129I in Halite from a Primitive Meteorite: Evidence for Evaporite Formation in the Early Solar System, Science, [summary – can be viewed for free once registered. A subscription fee is required for full access.]

° 9 June 2000: Salty Old Rocks, Science, [summary – can be viewed for free once registered. A subscription fee is required for full access.]

° 24 November 1999: Purple Salt and Tiny Drops of Water in Meteorites, Hawai’i Institute of Geophysics and Planetology

° 27 August 1999:  Asteroidal Water Within Fluid Inclusion-Bearing Halite in an H5 Chondrite, Monahans (1998), Science, [summary – can be viewed for free once registered]

° Description of Zag meteorite, The Meteoritical Bulletin, No. 83, 1999 July