[29 Jan 2000] Last week NASA announced that it had ended its search for the Mars Polar Lander when the last in a series of listening sessions failed to detect a signal from the Lander. Then, just a few days later, Stanford University announced that it may have actually detected signals from MPL on two previous occasions and that it was going to listen again. Buoyed by a spark of new found hope, NASA has begun to elicit help from radio astronomers around the world in a last ditch attempt to communicate with the lander.

Stanford University announced that analysis of data received during two listening sessions – one on 18 December 1999, the other on 4 January 2000 – seem to have detected signals that are clearly of artificial origin. The signals were rather faint and a terrestrial source could not be ruled out. These two occasions were times that the MPL (if it is still operating) would be preprogrammed to communicate using its UHF transmitter.

In analysing the data received at Stanford, researchers hypothesize that MPL is apparently unable to use its primary transmitter nor can it make use of the relay capabilities offered by the Mars Global Surveyor. As such, they suspect that the MPL is still transmitting a continuous wave signal in a portion of the UHF band not normally used. Moreover, the UHF transmitter was not intended for use in communicating with Earth.

According to a NASA press release on 27 January, “Radio scientists at California’s Stanford University are continuing to process data from communications attempts made yesterday and today to determine if they
have picked up a signal coming from Mars Polar Lander using their 45-meter (150 foot) antenna. There were three 30 minute communications windows yesterday and three more listening windows today. It takes about 18 hours to process the data from each window. So far, Stanford scientists have looked at one of the three data sets taken yesterday and say they have not detected anything unusual. It will take several days to complete the processing and the researchers do not expect to have confirmation of a signal until some time next week. “

On Friday 28 January, the Netherlands Foundation for Research in Astronomy announced that NASA had asked them to search for the MPL’s faint signals using NFRA’s Westerbork Synthesis Radio Telescope (WSRT). In a press release, NFRA noted that “WSRT is the most sensitive instrument in the world in the radio frequency in which people expect to be able to receive a possible signal. The 14 antennas at our disposal are well capable of detecting the difference between signals from earth and signals from space. WSRT is normally used to study natural radiation from galaxies and stars which is weaker still.”

Other observatories around the world have also been approached to participate in this search activity. Meanwhile, the results from this week’s efforts at Stanford will not be known until next week – and those from other observatories after that. Even if some form of communication is eventually established with the Mars Polar Lander, its value will be mostly to those investigation teams trying to figure out what went wrong with the mission. The spacecraft is in a polar location and was only designed to function while sunlight was available. That sunlight will soon be gone and the spacecraft will freeze. 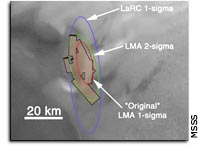 Meanwhile, the use of visual means (the camera aboard Mars Global Surveyor) to locate the Mars Polar Lander on the surface of Mars has met with little success. According to a press release from Malin Space Science Systems (MSSS), “since mid-December 1999, the Mars Orbiter Camera (MOC) onboard the Mars Global Surveyor (MGS) spacecraft has been taking pictures of Mars Polar Lander’s landing zone near 76°S, 195°W, in hopes of finding some evidence as to the fate of the spacecraft.”

To enhance the possibility that the lander, its aeroshell, or parachute might be located, the MGS was oriented a bit off of its normal straight down viewing angle so as to get better lighting angles within the search area. Even with these enhanced lighting adjustments, finding the spacecraft, is according to MSSS “daunting. The lander is most likely to consist of only a few square pixels within one of these images. Thus, the MOC team is basically trying to distinguish one or two pixels from nearly 150 million. One team member has remarked that
this is like “trying to find a specific needle in…a haystack-sized pile of needles.”

The results to date from these visual efforts have been as disappointing as the radio signal searches have been. To show just how difficult locating an object the size of MPL is on the surface of Mars, the MSSS team also released some new photos of the Mars Pathfinder landing site. Even though there is considerable “ground truth” known to a rather high degree of accuracy with which to triangulate the location of the lander, the team has still been unable to find those one or two pixels that actually represent Pathfinder itself.

° NASA Concludes All Attempts to Communicate with Lander, NASA JPL

° Visit News From Mars at the Whole Mars Catalog for the latest news.