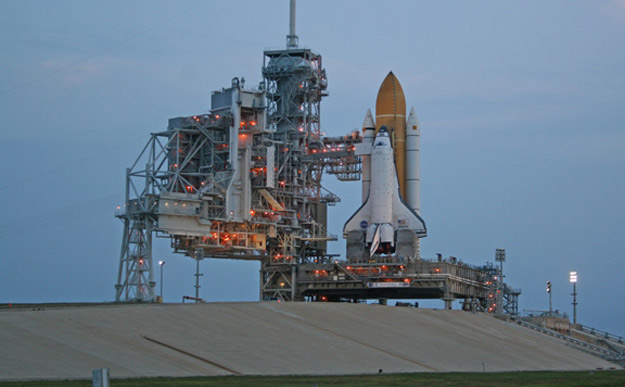 Shuttle Atlantis at Launch Pad 39A at sunrise waiting to liftoff for her final flight and the final flight of the space shuttle program.

KENNEDY SPACE CENTER – Updated 1:19 p.m. EDT -The Space Shuttle Era will soon come to a bittersweet close with the final scheduled flight by the Space Shuttle Atlantis, dubbed the STS-135 mission. Atlantis is slated to blast off on July 8 from the Kennedy Space Center in Florida at about 11:38 a.m.

The primary goal of the STS-135 flight is to haul the “Raffaello” multipurpose logistics module (MPLM) up to the International Space Station. The 21 foot long cylindrical module is mounted inside the shuttle cargo bay during launch and landing.

Raffaello is a space ‘moving van’ and loaded with some 5 tons of critical supplies, spare parts and science equipment to stock up the station before the shuttles are retired forever, despite the fact that they have many years of service life remaining.

I was given a close up tour of Raffaello inside the Space Station Processing Facility (SSPF) at KSC by Howard Smith, a NASA mission project engineer for the International Space Station (ISS), as the module was undergoing late stage preflight processing.

“We are holding Raffaello open until the last possible moment so that we get every possible final piece of station hardware and supplies shipped here and stowed inside before we close up the module and put it into the payload canister. We have no plans to get into the MPLM once it is out at the pad,” Smith stated.

During the 12 day mission, the astronauts will pluck Raffaello out of Atlantis’s cargo bay with the robotic arm and temporarily berth the module at a docking port on ISS Node 2 on Flight Day 4. The crew will then spend several days aggressively transferring the logistics supplies to storage spots aboard the orbiting complex.

“Because the shuttle crew on STS-135 is limited to only 4 astronauts there is a shortage of hands available for all the work and a real time crunch to get everything off the MPLM and onto the station and then off from the station and back to the MPLM in the right amount of time,” Smith added.

“After loading unneeded supplies, equipment and trash and a failed heat exchanger back aboard the module,” Raffaello will then be hoisted back into Atlantis cargo bay for her final return trip to Earth, explained Smith.

The fresh supplies are being brought aloft now by Raffaello to beef up the ISS with sufficient provisions to insure that the station can continue to fully function with a six person crew while NASA waits for the commercial space providers – SpaceX and Orbital Sciences – to successfully come online.

These new and privately developed rockets and cargo vehicles must take over the cargo delivery services formerly performed by NASA’s three shuttle orbiters or the ISS will enter a dire situation. The smaller Russian Soyuz Progress resupply spacecraft will be the primary means of cargo resupply after the Shuttles.

If the cargo delivery flights of the commercial providers are delayed, the station partners could be forced to cut back on the ISS crew staffing or even abandon the ISS in a worst case scenario. That’s why the STS-135 mission is so critical and was desperately sought for approval by NASA management.

STS-135 was only added to the shuttle flight manifest in January 2011 as Washington politicians wrangled tumultuously over the NASA budget and strategic priorities throughout the past year.

Raffaello is one of three MPLM’s, all built by the Italian Space Agency and handed over to the US in exchange for flying Italian astronauts and experiments to the orbiting lab complex.

“The MPLM’s were originally built to fly up and fly back on the same mission,” said Smith. They could endure only short term shuttle stays at the ISS.

NASA recently decided to retrofit the ‘Leonardo’ MPLM with additional micrometeoroid protective shielding to enable it to be permanently attached to the ISS as a new habitable module and provide much needed additional storage space for the crew.

Leonardo was modified and then rechristened as a Permanent Multipurpose Module (PMM) and attached to the station by the final flight of Shuttle Discovery on the STS-133 mission as the last pressurized room contributed by the US, Smith elaborated.

“Leonardo will stay at the ISS forever, or at least for the life of the station.”

“All the MPLM’s are equipped with 16 storage racks; 4 locations deep on the top, bottom, left and right sides. We then place all the stowage items of crew food, water, clothing, experiments, repair parts and assorted gear into bags for the racks. It can carry up solids, liquids and assorted piece parts.”

“The racks are installed into the MPLM through the aft access port using the Rack Insertion Device. That’s the port facing space, not attached to the ISS.”

“Like Leonardo, Raffaello has also been modified to reduce weight and loft a heavier cache of supplies to the ISS, Thanks to further engineering work by the Italians, Raffaello can now carry up an additional several hundred pounds of cargo, positioned especially around the aft access port.”

“This is the last opportunity to use an MPLM to ship equipment to the ISS so we are closing Raffaello out at the last possible moment. Altogether, Raffaello is carrying up about 10,000 pounds of payloads when fully loaded,” Smith explained.

All these logistics and crew provisions carried aloft by the STS-135 mission will supply the station residents for about 1 year. The Russians are providing about 50% of the food.

“Raffaello is the last train out of here!” Smith said, referring to the imminent retirement of the Space Shuttle program and the importance of the STS-135 flight to the stations future. 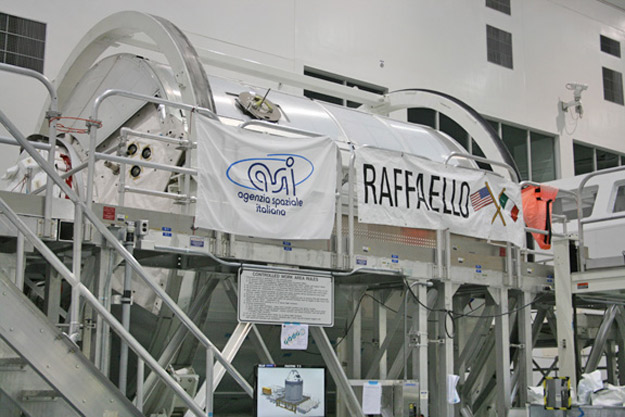 Raffaello multipurpose logistics module (MPLM) inside the Space Station Processing Facility (SSPF). On the very last flight of the Space Shuttle program, Raffaello will be delivered to the ISS by Space Shuttle Atlantis on the STS-135 mission. Robotic arm grapple fixture at top, left. The cylindrical module is approximately 21 feet long and 15 feet in diameter, weighing almost 4.5 tons. It can carry up roughly 25,000 pounds of cargo to orbit. 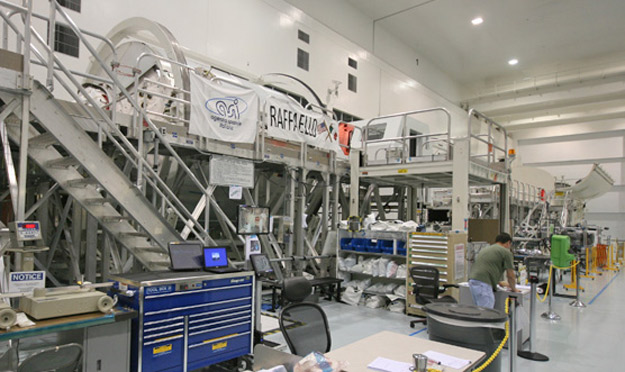 Raffaello housed in the element rotation stand inside the Space Station Processing Facility at the Kennedy Space Center. 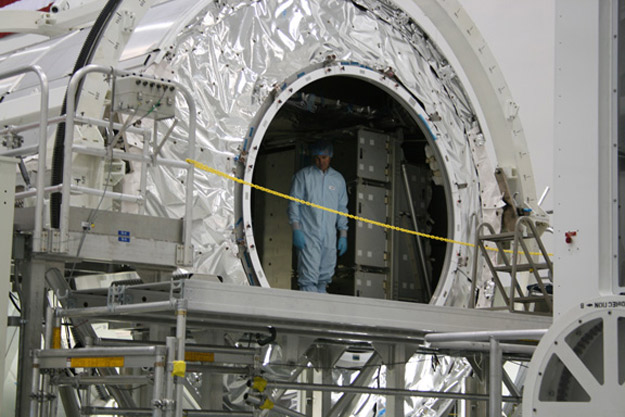 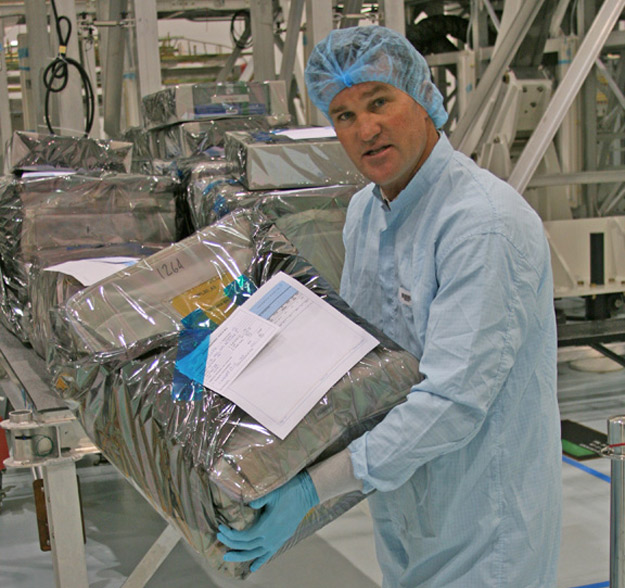 SSPF Technician shows the packaged spare GPS Antenna for loading aboard Raffaello and bound for the ISS.