[16 Jan 2000] Astronomers from Lawrence Livermore Laboratory have used the W.M. Keck II telescope in Hawaii to obtain the best images to date of the surface of Saturn’s moon Titan. The image surpass those produced by the Hubble Space Telescope. The images were made in the infrared (wavelength of 1.65 microns) using the Keck telescope‘s adaptive optics system.

According to a press release, “The bright crescent at the southern rim (bottom of image) is due to scattering of sunlight by hazes in Titan’s atmosphere. The dark features in the northern hemisphere (top half of image) are surface features. Titan’s surface is thought to consist of highlands or continents made of ice (at Titan’s very cold temperatures, ice acts the way rock does here on Earth). Titan is also predicted to have lakes or seas made of liquid hydrocarbons (such as liquid ethane). Some of the dark regions seen in the northern hemisphere may represent these dark lakes.” 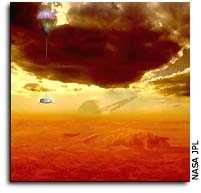 To date, the surface of Titan has more or less eluded close scrutiny. Titan has been known to possess a thick atmosphere since the 1940’s. In November 1980, the Voyager 1 spacecraft provided close-up views of Titan from a distance of 4,000 km. Alas, they were close up views of an impenetrable cloud layer. Titan’s atmosphere is much thicker than that of Earth. It is composed mostly of Nitrogen with a bit of Methane, and features a wide range of organic compounds as trace components.

The Cassini spacecraft, launched in October 1997, will enter the Saturnian system in late 2004. In December 2004, the Cassini’s Huygens probe (named after the Dutch astronomer who discovered Titan in 1655) will enter Titan’s atmosphere. As it descends, it will make measurements of the composition of the atmosphere and of the surface below. No one knows exactly what to expect when Huygens “lands”. Indeed, it may well land in a lake of ethane. As such, the probe has been designed to float for a while – just in case.

Given the incomplete understanding we have of what lies beneath Titan’s clouds, observations such as the one made by these astronomers provide critical insights into what Huygens can expect to find when it reaches Titan.

Just as the Galileo probe has found its mission extended (several times), Cassini may also find itself assigned new tasks once its main mission is completed. One of these might include additional close flybys of Titan. Indeed, according to JPL, there are mission concepts which would use aerobraking within Titan’s atmosphere to place Cassini into orbit around Titan so as to perform detailed observations.