If you were watching the Inaugural Parade on TV several weeks ago hoping to see a NASA rover – only to miss it – don’t feel bad. You were not alone. The rover was placed at the end of the parade so as to highlight it. Alas, due to lagging schedules that day, by the time the rover finally made its way to the Presidential reviewing stand, nearly all TV networks had already gone to commercials or cut to local news.

A few TV networks such as C-SPAN and the local cable news channel here in Washington DC did air the NASA Small Pressurized Rover’s appearance – and hundreds of thousands of people lined up along the parade route saw it as well, and I’m certain millions still managed to see it on TV so it was not a total loss.

Most importantly, I watched the faces of President Obama and his wife. There was a noticeable widening of their smiles as it approached and went through its routine.

While this rover does score high on the geeky SciFi scale, there is a lot more to it than meets the eye. I have been following its development for several years. As much as I have wanted to see it in action with my own eyes, short notice for field trial media opportunities by NASA Public Affairs made that hard to do.

The day after the Inauguration NASA parked the rover outside of NASA Headquarters and offered the media chance to learn more about it and have a look inside.

We’ve all seen rovers in the movies and on TV. Having grown up in the 60’s I have the image of the “Chariot” from “Lost in space” (filled with all of those Robinsons) burned into my mind. To be certain these make believe rovers look cool indeed,the Chariot was actually a specially modified 1965 SnowCat used at ski resorts. But if you stop and think about the story line of this show (or other SciFI flicks with rovers), you realize that the occupants need to sleep, eat, bathe, use the bathroom, etc. And oh yes. they need to go outside in their spacesuits. These movie props would fail in meeting those requirements.

The “Chariot” from “Lost in Space”.

The media presentation was comprised of a presentation by John Olson from the Exploration Systems Mission Directorate (ESMD) and astronaut and Small Pressurized Rover manager Mike Gernhardt from NASA Johnson Space Center. Anyone who has covered NASA’s exploration plans over the past few years knows that while NASA is big on pretty graphics, they get down right slippery when you try and nail them down as to what things will look like and what they will do. In their defense, NASA really does not know yet. What they will show you and discuss most enthusiastically are “notional” concepts that represent a “point of departure”. Indeed, these words “notional” and “point of departure” roll off their tongues so easily and pepper every conversation they have. If you can get by this annoying bit of NASA speak, there is actually quite a lot of thinking going on. 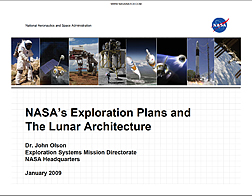 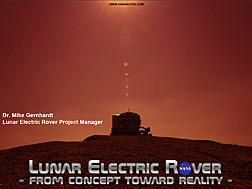 Using rovers on the Moon is not an new idea. Apollo missions used a simple, open rover that dramatically increased the area crews could cover. More advanced concepts including pressurized rovers were also contemplated. But the Apollo program was cancelled before any of the more advanced surface mobility concepts ever had a chance of being implemented. But the lessons learned were not entirely forgotten. 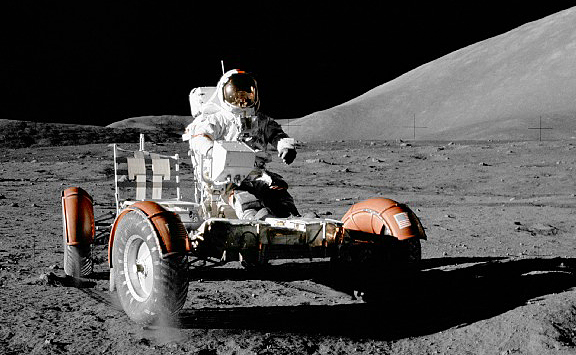 While many variants can be described, the core “point of departure” is to field rovers with a nominal crew of two – but capable of carrying four if need be. The rovers would operate in a team fashion such that one was never too far enough away from the other to offer assistance. Each rover was also designed to be able to support its two person crew until help arrived. These rovers would be delivered in pairs on a cargo version of the Altair lander – thus requiring a dedicated Ares V launch.

Some scenarios have these rovers making their debut early in a return of humans to the moon. Other scenarios focus on other things first. Another scenario treats the rovers as the first lunar base – or a significant part thereof such that the “base” can move about the lunar surface, stop in one location for a while, and then move on. Which mode or modes are adopted is still not certain – and is dependent on whether the currently envisioned plan moves ahead at all.

Forgetting politics for a moment, the folks at NASA have managed to come up with a good guess at how such a rover might work – and have created something that you can drive. More importantly you can use it to perform meaningful work. To be certain, this is a vehicle that is designed to work on Earth – pneumatic tires, no life support system, etc. But that is not what it is designed to test. Rather, it is designed to be used as a rover might be used on the moon – not how you’d build the subsystems etc. for an actual moon rover. Once the utility requirements are firm, then you go and design the actual lunar rover.

I asked astronaut Mike Gernhardt about this. NASA tends to build spacecraft to be in accordance with existing standards – usually meaning that it is limited by or required to adhere to these standards. Gernhardt said that a firm eye was being kept on existing standards (NASA-STD-3000 etc. which defines spacecraft design requirements for human usage), but that he hoped that the standards that would eventually define lunar rover design would be derived from their rover and how they used it – and not the other way around. After all, no one has built a rover designed to carry (and support) humans on the moon for more than 40 years. And what work was done in the Apollo days did not have the benefit of 40+ years of spacecraft design and engineering advances.

Engineering advances are important. But at the end of the day, humans have not changed. Computer keyboards (if you ignore cellphones) look much the same today as they did 20 – 40 years ago. Human fingers are the same design. How humans work, relax, bathe, interact, sleep, eat etc. is similarly unchanged. As such, rover design has benefited from lessons learned for terrestrial construction machinery, submarines, and industrial robots. I am certain there is a little covered wagon, SUV, and SciFI engineering in there as well.

The rover NASA has designed comes in two variants: a pressurized version where the crew operates in a shirtsleeve environment and exits via an airlock or an unpressurized version where astronauts stand and drive while wearing spacesuits. The pressurized rover has the capability of housing two space suits which are docked at their back with the rover. Astronauts climb into the suits close a small hatch and detach from the rover when they need to walk around. When they are done they reattach their suits to the rover and climb back out.

This video shows how straightforward the process of detaching the suit from the rover is.

The chassis, drive system, and control are common between the two versions. All told, these units cost about $3 million to build. The cost is not exact given that many items where borrowed from other projects and a lot of volunteer time was used.

The pressurized rover has a retro-future look to it. Indeed if you look at NASA’s MOLAB pressurized rover concept from the Apollo days and even early Lunar Excursion Module designs, you will see a similarity. When you go inside the river another commonality becomes apparent: a helicopter cockpit. With the wrap around glass occupants are able to get an expansive view of their terrain.

The rover is designed to house 4 occupants in a contingency but two under normal conditions. When you are out in one of these rovers, you live in it – for days, perhaps weeks at a time. As such, like any good family van, you need to be able to reconfigure the interior. For sleeping, all the seats lie flat and a curtain is drawn right down the centerline. There will be a shower and a toilet as well. There are also provisions for work table,s food storage, equipment repair, and other things you could expect to need to do during a prolonged sortie across the lunar surface.

Indeed, the rover is so comfortable that Mike Gernhardt passed over tent accommodations for all of the rover crew at Fort McNair prior to the Inaugural parade for a chance to sleep inside the rover.

When you watch videos of these rovers in action you will see that they differ from the Apollo rovers – and from most wheeled vehicles for that matter. In addition to forward and backward movement they can pivot their wheels and move in virtually any direction. When this mode is used to get around an obstruction, the phrase “crab walk” is often used. The rover can also kneel and lower itself if need be. 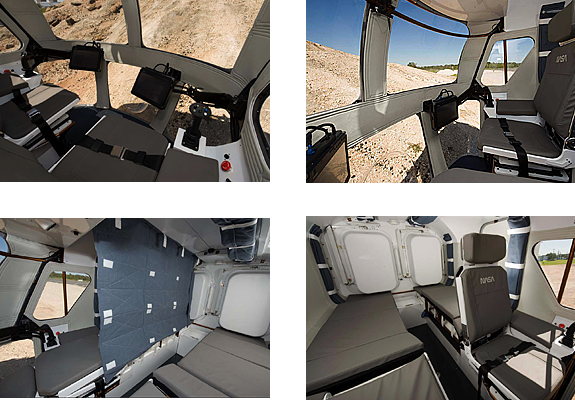 Inside the rover. Top left and right: Looking out through the front windows. Bottom right looking aft, bottom left, seats set up for sleeping with partition.

Having been inside a converted Humvee ambulance on Devon Island, a remote location where the Haughton-Mars Project Research Station is located, I can tell you that this rover seems much more hospitable and adapted to rugged and unpredictable terrain. Yet both vehicles serve their own purposes. Together they help refine and define what it is we will need to have when we start to truly explore the lunar surface.

Indeed, Pascal Lee, the Principal Investigator for the Haughton-Mars Project engaged in significant participation in the use of this rover during its field trials last year.

Again, these rovers were inWashington, DC to participate in the Inaugural parade. These media opportunities were a side benefit. Some may question the value of being in a parade wherein most of the participants are just walking or playing musical instruments. Indeed, the vast majority of the cost of the rover’s participation in the parade was paid for by NASA – not the Inaugural Committee.

I asked a series of detailed questions about the cost of the event. As always, NASA has a problem figuring out costs and it took a while to get numbers out of them. They did tell me that it cost $42,000 to ship the rover up to Washington from Texas (by truck). Add in the cost for two dozen or so employees to travel to and from Washington ($1,000), salary ($500 per day), hotel (many slept in tents at Fort McNair by the way) and you get something like $36,000 for a total cost of around $78,000.

When you look at the things NASA hauls around the country, this is certainly “in family” with the cost of a one day event. I think it was worth it. All told, the cost of having the rover in the parade was probably in line with some less visible NASA outreach efforts. What would be nice is if NASA were to cut back on some of the cute outreach stuff they do – static models, inflatable spaceships,etc. and find a way to get this rover and other hardware out in front of people. When you see it close up, the reality of what is being planned for the Moon becomes unavoidably apparent – and exciting.

NASA Edge has their own unique take on the rover ….