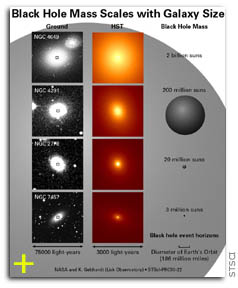 European astronomers using the Hubble Space Telescope to study nearby disk galaxies have obtained evidence pointing to two supermassive black holes. The team measured the speed of gas clouds located at the centers of these galaxies. According to ESA “in at least two of the objects, they discovered gas at the centre moving with a velocity of 10 million km/hour – 30 times faster than it moves anywhere else in the galaxy. Overall the study confirms that supermassive black holes must exist in the majority of ordinary galaxies.”

Meanwhile, American astronomers analyzed the motion of stars as they moved around galactic hubs, thus measuring the mass of black holes at the centers of these galaxies. The results of these observations indicate that black holes formed after a galaxy became organized and evolved over time such that they fed off of material within the galaxy. According to NASA “black holes in small galaxies went relatively undernourished, weighing in at a mere few million solar masses. Black holes in the centers of giant galaxies, some tipping the scale at over one billion solar masses, were so engorged with infalling gas they once blazed as quasars, the brightest objects in the cosmos.”

Furthermore, according to NASA “The results also explain why galaxies with small bulges, like our Milky Way, have diminutive central black holes of a few million solar masses, while giant elliptical galaxies house billion-solar-mass black holes, some still smoldering from their days as quasars”

° New results by a group of European and American scientists make it clear that the NASA/ESA Hubble Space Telescope is nothing less than a true black hole finder, press release, ESA

° Double-Peaked Broad Emission Lines in NGC 4450 and Other LINERs [Abstract], The Astrophysical Journal.

° The black hole in IC 1459 from HST observations of the ionized gas disk [Abstract], The Astrophysical Journal.