[24 Jan 2000] In 1994, just after corrective optics were placed on the Hubble Space Telescope to correct a design flaw, NASA released a stunning new view of Galaxy M100 to show off Hubble’s true capabilities. Since that time not a week hasn’t gone by without something marvelous released by the Space Telescope Science Institute – except during the Fall of 1999 when Hubble orbited dormant after a gyroscope failed. Once again, NASA has kept to its tradition of using stunning new pictures to herald a new phase in Hubble’s mission. 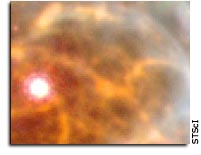 One of the pictures chosen this time was of NGC 2392 , the “Eskimo Nebula” (also know as the “Clownface Nebula”) a planetary nebula located in the constellation Gemini.

The term “planetary” nebula is somewhat misleading and is a relic from the early days of telescopic astronomy. This ‘planetary’ nebula is actually the remnants of a cataclysmic stellar explosion.

In a planetary nebula, stellar explosions cause gas and debris to expand outward in a roughly spherical shell, with light and high energy radiation being refracted and absorbed by these materials causing different portions to glow in a wide array of colors. In a small telescope they look like planets, hence the name. These nebulae often take on additional names, ones that describe what the nebula looks like.

In the case of NGC 2392, first observed and cataloged by William Herschel (discoverer of the planet Uranus) in 1787, it seems that there was a hung jury i.e. “clown” vs “eskimo”.

With the unprecedented increase in detail provided by this image, a curious ring of comet-shaped clumps (much larger than comets though) can be seen which seem to ring the central star at roughly the same distance. Astronomers are not quite sure that these features are or how they formed, but speculate that this could be the collision of materials moving outward at high velocity colliding with materials moving outwards at a lower (relative) velocity.

° Hubble Opens its Eye on the Universe and Captures a Cosmic Magnifying Glass , press release

° Ground-based telescope image of the Eskimo Nebula, University of Michigan