How to Catch Pieces of a Comet

Astronomers have been studying comets from earthbound observatories for thousands of years. These periodic celestial visitors follow long, elliptical orbits, and when they swing near the sun, their glowing tails can stretch for millions of kilometers, and are sometimes visible at night to the naked eye. But comets are more than just visually interesting celestial objects. They are collections of dust, ice and gas left over from the formation of the solar system that could hold clues to how life arose on earth.

To learn more about what comets are made of, the U.S. space agency, NASA, is sending several robotic spacecraft to rendezvous with comets over the next few years. One mission, called Stardust, will be the first to collect particles from a comet and return them to Earth. The success of the mission relies upon a unique synthetic material called aerogel.

The Stardust spacecraft is designed to maneuver itself into the tail of the Wild-2 comet in January of 2004. While in the tail, the craft will extend a robotic arm to capture samples of dust. Catching that dust won’t be easy. The rocky debris will be speeding towards the spacecraft six times faster than a speeding bullet. In order to cushion the particles’ impact and capture them safely, Stardust’s robotic arm will be covered by a few cubic centimeters of an unusual material called aerogel.

In an experiment using a special air gun, particles are shot into aerogel at high velocities
Courtesy: NASA

Tom Duxbery, Stardust’s project manager, says “the dust particles need to be treated somewhat gingerly. When at first they strike the aerogel, they remain intact as a particle. There’s a lot of heat produced. And as they work their way through the aerogel, and this all happens in a microsecond, they go from 6 kilometers a second down to completely stopped. That heat will re-melt this aerogel material and it will encapsulate those dust particles in a little glass sphere.”

Aerogel is a solid material, first developed in the 1930s, that is comprised largely of air. In fact, 98.8 percent of the material is empty space.

Aerogel in a hand looks like vapor, but is very solid
Courtesy: NASA

Nasa’s aerogels are made from a special silica glass gel that’s been mixed to the consistency of pudding. Heating boils off the liquid in the gel and the material that remains is like a hard sponge, slightly coarse and almost weightless. You can even see through it. These characteristics earned aerogel the nickname “frozen smoke.” 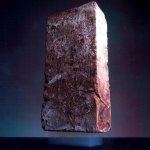 A 2.5 kg brick is supported on top of a piece of aerogel weighing only 2 grams
Courtesy: NASA

But Mr. Duxbury says that despite its extraordinary lightness, aerogel can be quite sturdy. “If you would hold it, you could put your finger directly through it and it would crumble,” he says, “but if you would hold it on its edges and shake it very hard or squeeze it a little bit, it has good strength in those directions.”

Mr. Duxbery adds that strength will be necessary for the aerogel to survive the stresses of space flight and more importantly, cushion the impact of comet particles. According to Peter Tsou, head of the NASA team that’s making aerogel for the Stardust mission, the material’s ability to absorb intense heat is another important quality. “Let me demonstrate to you with this flame here. This is just a piece of paper,” he says. “You can see this paper burns. But if I take the same piece of paper and put it on top of this aerogel here…I put this flame under…and it does not burn. And in fact showing that it’s not hot, I can put my hand on it and it insulates heat very well.”

Crayons on top of aerogel
are protected from the flame underneath,
and are not melting
Courtesy: NASA

Mr. Tsou says this property will help aerogel cope with the heat generated by impacts with fast-moving comet dust. The aerogel on Stardust is designed to melt just enough to capture hot comet dust for safekeeping.

Besides being able to trap the comet debris, aerogel’s ability to encapsulate it will also help prevent the dust particles from undergoing any chemical changes. That will help ensure the integrity of the comet samples during their long storage aboard the Stardust spacecraft.

The unmanned NASA probe will rendezvous with Comet Wild 2 in January of 2004. However, the spacecraft won’t return to Earth until January of 2006, when – thanks to aerogel – scientists will finally get their hands on some real comet dust.