How Did A Confederate Flag Get Aboard the International Space Station?

Editor’s 13 June 6:40 pm EDT update: I just spoke with Alex Panchenko, the person who posted this item on eBay. Panchenko called to tell me that he had spoken with Salizhan Sharipov today and that Sharipov knew absolutely nothing about these flags. Panchenko told me that his source for these flags was a third party and not Sharipov. As such he is now convinced that these flags are not what they were presented as being and that they are forgeries.

Moreover, Panchenko told me that he was unaware of the controversy that surrounds this flag in the U.S. until he consulted a history book. He told me that had he known what this flag represents to some people he would never have posted it on eBay in the first place or even consider selling it at all. Panchenko is now making certain that everyone knows that this was the result of an honest mistake and is trying to get eBay to pull the item off of its website.

A seller on Ebay is currently offering confederate flags which have flown aboard the International Space Station. [ see this eBay link: Soyuz TMA-5/ISS-10 Flown American Confederate Flag ] The question many are asking is why NASA would allow the flying of a symbol many people find to be offensive.

When I asked Leroy Chiao about this matter today he replied “The Confederate flag story is a mystery to me.  I don’t remember seeing any aboard the ISS and I certainly don’t remember signing one. I am baffled by the whole thing and can’t even speculate on it.”

NASA PAO checked the manifest for that mission – and all that is listed is “flags”. No mention is made of what the flags were. According to PAO, NASA JSC personnel do not recall seeing any confederate flags on any space shuttle manifest – so if they were launched, it would have had to have been aboard a Soyuz spacecraft.

As such, neither Leroy Chiao or NASA had anything to do with the flying of this stack of confederate flags. Yet this eBay posting claims that Chiao signed these items. An image on this posting seems to have two stamps and two signatures on it – but none of these marks seem to be legible.

However, since the Confederate flag does not represent any existing nation, and the stack of flags was flown into space for the purpose of being signed and stamped, it would certainly seem that Salizhan Sharipov had to have been aware that there was a commercial aspect to this. Of course, these flags are now for sale by a vendor (Alex Panchenko, USSR-AirSpace.com) who has a business that sells things that have been in space.

Indeed, Salizhan Sharipov signed certificates authenticating this item. An image of this certificate was originally part of this eBay listing but has since been removed. 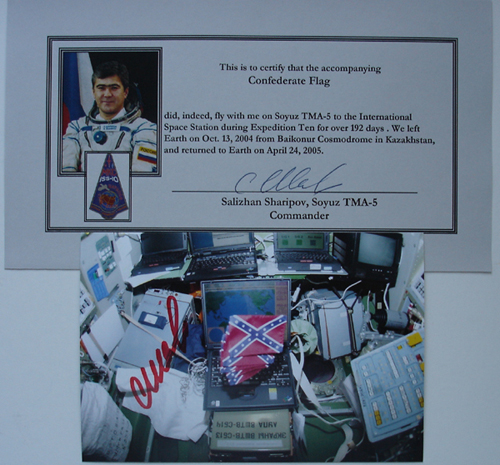 14 CFR Part 1214 Code of Conduct for the International Space Station Crew is very specific about the things ISS crew memebers are expected to do.

C. Use of Position

Each ISS crewmember may carry and store mementos, including flags, patches, insignia, and similar small items of minor value, onboard the ISS, for his or her private use, subject to the following:

(1) mementos are permitted as a courtesy, not an entitlement; as such they shall be considered as ballast as opposed to a payload or mission requirement and are subject to manifest limitations, on- orbit stowage allocations, and safety considerations;

If a Cooperating Agency carries and stores items onboard the ISS in connection with separate arrangements, these items will not be considered mementos of the ISS crewmembers.