Ten years ago few people had heard of the Internet. Even 5 years ago it was viewed by many as a technological curiosity – some thought it to be a passing fad. Now the so-called “dot com” economy makes multi-billion dollar deals on a regular basis. Ten years from now the Internet could be a phenomenon that has expanded beyond Earth to form an interplanetary network of Internets reaching to Mars and beyond. That is the vision of Vint Cerf and his colleagues at the InterPlanetary Internet (IPN) team.

The idea of an InterPlanetary Internet came to Vint Cerf several years ago as he was trying to formulate an idea of what the Internet might look like in the future. He envisioned a series of Internets linked by gateways and using the Internet Protocol (IP) suite (a world-wide standard) as its basis. By using the IP protocol (which he helped co-create), he felt that existing technology could be leveraged so as to speed up development of the InterPlanetary Internet.

So what would we need a InterPlanetary Internet for? An immediate application would be to help facilitate communications between Mars and Earth. By happy coincidence, a new study underway at NASA called the Mars Network aims to do exactly this. The Mars Network would consist of a constellation of microsatellites and one or more (larger) Mars Areostationary Relay Satellites. This system would be used to support the Mars sample return missions and other surface and orbital activities. By placing this infrastructure in place around Mars individual spacecraft on Mars would not require as much communications capability as is presently the case. This could allow mission designers to either use smaller spacecraft, or devote more weight and volume to scientific payloads. 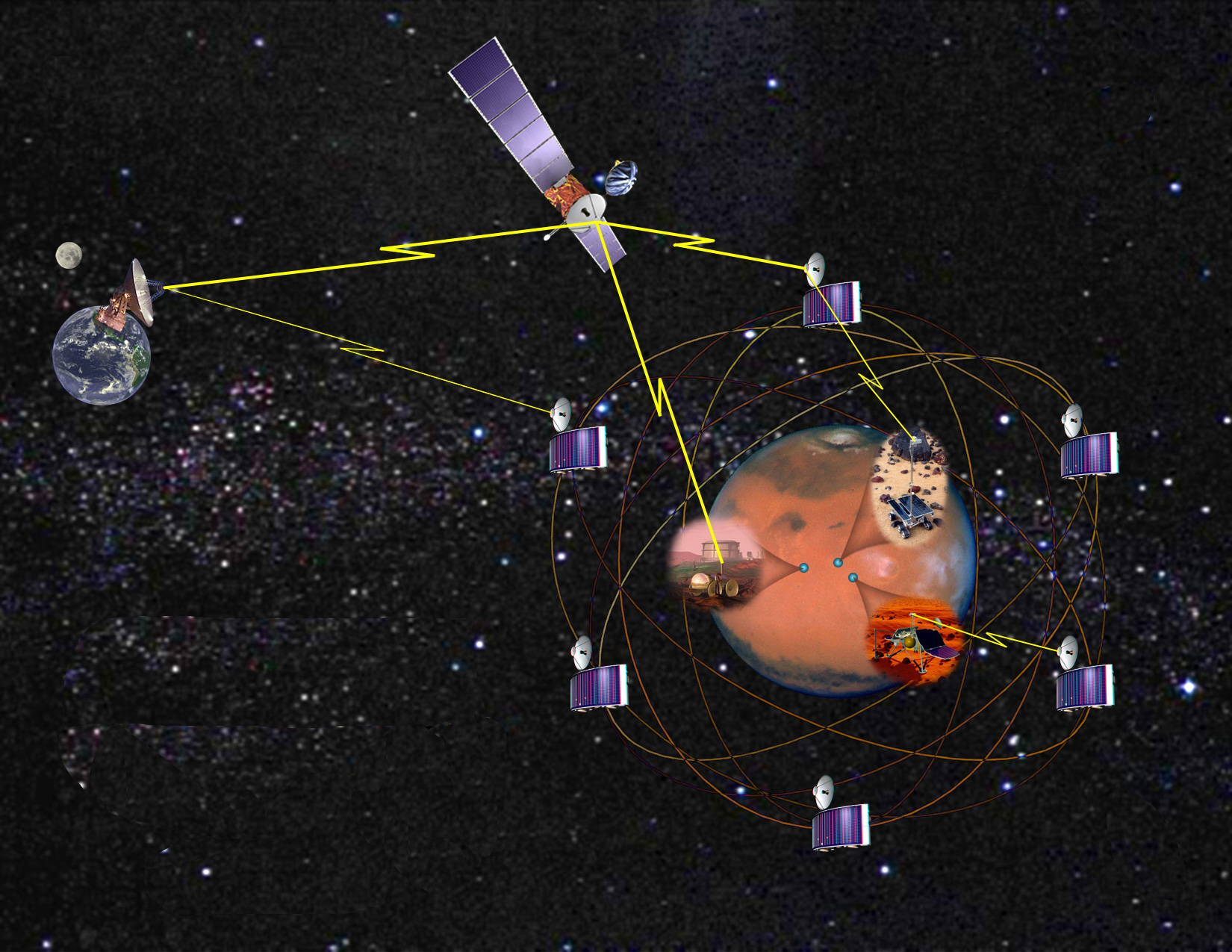 With this kind of network in place, the communications problems resulting from having very little communications infrastructure in place at Mars that plagued the ‘rescue’ efforts after the Mars Polar Lander disappeared would be greatly simplified.

The potential applications of a InterPlanetary Internet extend well beyond the management of space missions. People who surf the Internet today and tap websites in extreme locations such as Antarctica may some day be able to communicate to web or ftp servers on Martian microsatellites to request data directly from Mars. And that’s just the beginning. Eventually there will be web servers on the International Space Station, on (or above) the Moon and other planets, and other regions of the solar system. We’ve already watched live images from webcams bolted onto the side of rockets as they lift off from NASA’s Kennedy Space Center. There might even be webcams in space!

What would an InterPlanetary Internet look like? Imagine the Internet on Earth and a similar one on Mars linked by Gateways. These Gateways are satellites, which relay the information between the Internets. (See Image)

Before we get too carried away with the gee wiz possibilities, there is still a lot of research and challenges to overcome before the IPN becomes reality. One problem is interactive protocols. Typically, a request on the Internet is interactive. Users request a web page from a server and the server responds by “serving up” the page that was requested – an informational transaction directly between requester and server carried out in real time.

This is not possible (yet) in the InterPlanetary Internet. Nor will the near-real time immediacy of the current Web be possible once we have expanded outward from Earth. On Earth we are separated from one another by no more than a fraction of a light second – even if several communication satellites in 22,300 mile high geostationary orbits are involved. The delay – or latency – between request for and receipt of information (such as a telephone call) is usually not noticeable.

When interplanetary distances are involved – and the distance signals need to travel is measured in light minutes – or hours, interactive protocols just don’t work. To solve this problem a “store and forward” methodology will be used. The user’s request for information will be sent to a gateway, processed, and forwarded to its final destination. Once at its destination, the request will be checked, queued, and then processed and forwarded back down the path it came. This process would use a new protocol dubbed the “parcel transfer protocol”.

“The Parcel Transfer Protocol”. An animated sample transaction between Earth and Europa.

Another major problem facing the InterPlanetary Internet has to do with power consumption by the various nodes in the system. Many potential applications for the InterPlanetary Internet lie in the outer solar system and gateways will need to be positioned in deep space so as to pass information back and forth. Current photovoltaic-powered satellites start to become impractical beyond the orbit of Mars necessitating more efficient hardware and different power supplies.

Other problems include servicing of broken hardware (its quite a long and expensive trip!) and how to avoid them in the first place. Robust redundancy will be required for gateways to ensure reliable, long-term operations. There is also the problem of orbital dynamics – and the problems that arise when the sun is between two points that wish to communicate. One way around this would be to position gateways at solar LaGrange points.

There are currently five thrust areas for the InterPlanetary Internet. They include; Deployed Internets, Inter-Internet Dialog and Nodes, Interplanetary Gateways, a Stable Backbone, and Security. 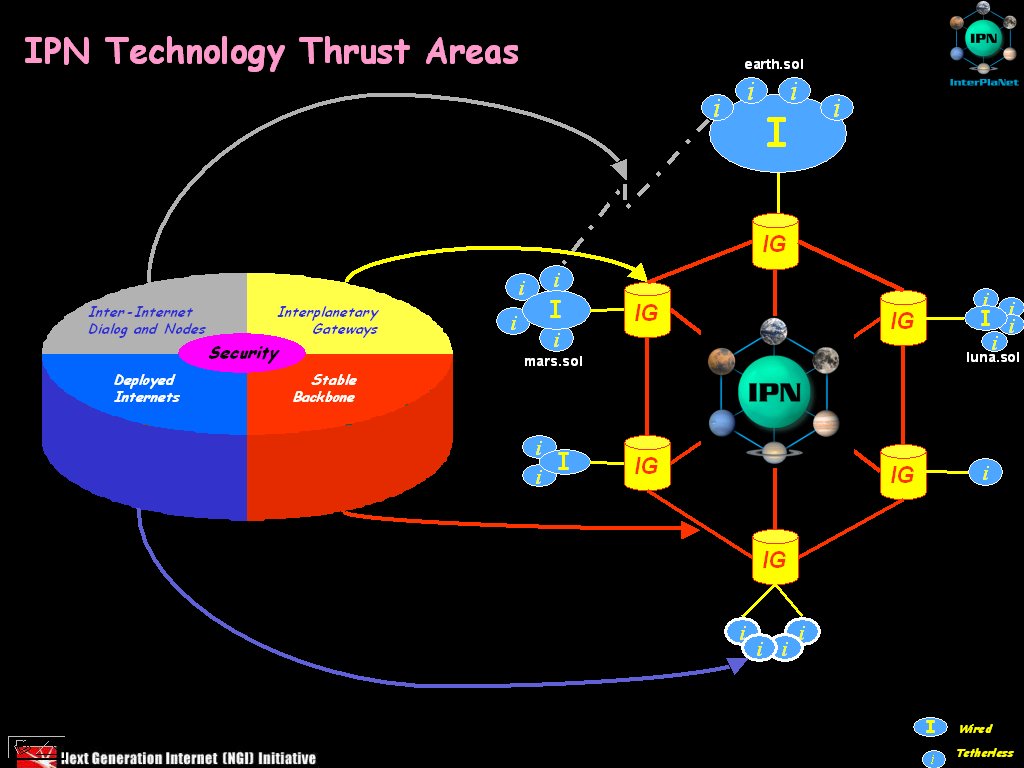 As mentioned earlier, in order to advance the development of the IPN, current Internet or ‘Terrestrial Internet Standards will be used for short-haul communications. Current ‘Space Internet Standards’ formulated by the Consultative Committee for Space Data Systems (CCSDS) will be used for long-haul communications. The CCSDS is an international organization of space agencies and industrial associates working together to solve problems associated with space data communications. Both have faced similar problems in other areas and have managed to forge common solutions. This marriage of standards will help make the IPN possible.

The IPN has three planned developmental phases. Phase 0, the study phase, is currently underway. Phase 0 is set to run through early 2001. Phase 1 involves IPN architectural development and will run to the end of 2003. Phase 2 involves the first IPN rollout and should start in 2004.

As part of the Phase 0 study, plans are underway to test the IPN protocol as part of the UK lead Space Technology Research Vehicle 1d (STRV-1d). This satellite is scheduled to be launched later this year will be used to evaluate new space technologies. Several countries and organizations will participate in this project.

In addition to test flights, a ground test might be conducted in the summer of 2001 at the Mars Society’s Flashline Arctic Research Station. Flashline Station, a Mars base analog on Devon Island located in Canada’s high arctic, could be used to test the protocol from the STRV-1d satellite which will be in geosynchronous transfer orbit. Under one scenario, small autonomous rovers would communicate back to Flashline Station as part of a deployed Internet. The station’s communications facilities would then relay the data back to orbit and then back down to another communications station at mission control located somewhere else on Earth.

Your Help is Needed

While there is a core team of six people working on this project, it is not a full time endeavor for them. The IPN team is looking for more people to get involved in this project either through the IPN special interest group or through post-graduate studies.

The Internet has undergone many changes as it has grown from its conception in the 1960’s. It began as a robust way for military organizations to have assured computer communications after a nuclear strike. It then evolved into a network used by researchers to share scientific data. It then took on the role of an email messaging service – a role that exploded in the mid-90’s with the advent of the Web transforming the Internet into a planetary nervous system we can’t imagine living without. If history tells us anything, it’s that the Internet will continue to grow and add new capabilities. Wiring up the solar system certainly seems like the next big challenge.

(Note: The author is involved in the IPN)