NASA recently posted a series of emails sent to officials of the NASA Headquarters Office of Safety and Mission Assurance in response to a Freedom of Information Act Request.

Among the emails released are several which make mention of a closed, members-only website called “107 Team“. This closed site was designed, according to an invitation email message (below) sent only hours after the accident from Dr. J Steven Newman to John Lemke, as “our group’s private website. We can use it to share group documents, schedule events, hold online discussions, and more.”

Membership in the 107 Team intranet is by invitation only. According to this email, the 107 Team was established “to provide a communication clearinghouse for NASA personnel involved in the recovery and mishap investigation activities associated with the tragic loss of STS-107.”

One would assume that such a website, constructed by NASA civil servants, on government time, for explicit use with regard to the STS-107 accident investigation, would be considered part of the material provided in response to this FOIA request.

Indeed, it is rather surprising that a non-governmental information system was used for such a purpose during such a highly visible accident investigation. Indeed, one has to wonder how much – and what sort of information exchanges – occurred outside of regular official government channels. 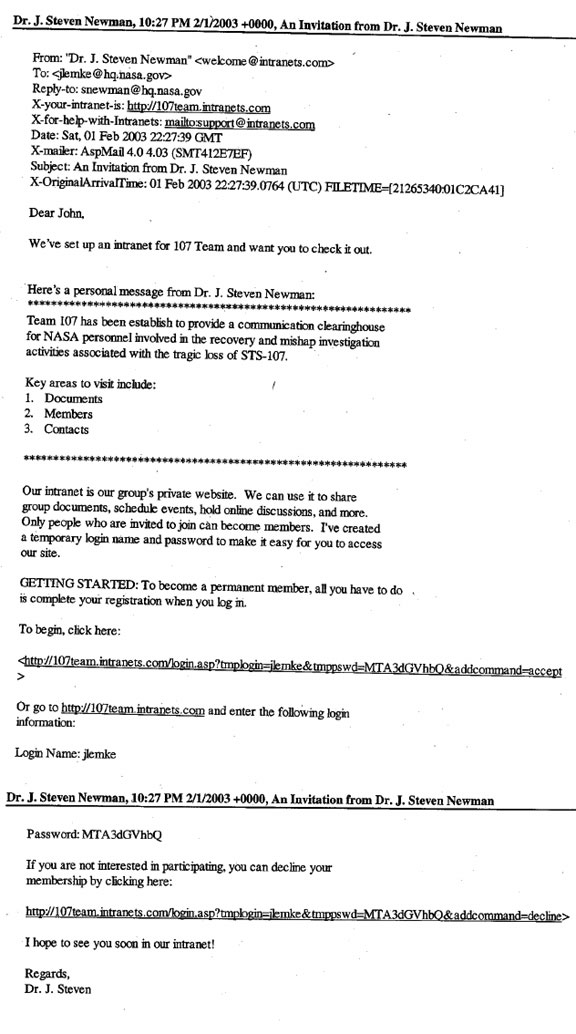