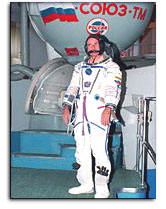 Dennis Tito’s plans to fly to the International Space Station as a paying customer aboard a Russian Soyuz “taxi” flight have hit a major snag.

This morning, cosmonauts Yuri Baturin and Talgat Musabayev, and their commercial passenger Dennis Tito, along with their back up crew, arrived at NASA Johnson Space Center (JSC) to begin training for the upcoming Soyuz taxi mission to the International Space Station (ISS). The working launch date for that mission is 30 April 2001.

According to NASA sources, upon their arrival at the main gate at JSC, the cosmonauts and Tito were escorted to the badging room in Building 100 until JSC officials could come to meet with them. At that meeting, JSC officials suggested that the cosmonauts should go ahead and begin their training while Tito would proceed to Building 1 for a series of meetings. JSC officials had a series of sessions planned wherein unresolved issues of legal liability and training proficiency would be addressed with Mr. Tito.

The cosmonauts objected to this plan stating that they would all train together or not at all. Things came to a halt at that point. At the end of the meeting NASA officials also learned that among Mr. Tito’s travelling staff was a writer for Newsweek – something they were unprepared for.

According to NASA sources, NASA has three main issues with Mr. Tito’s participation on the 30 April Soyuz taxi flight to the ISS.

As such, even if the legal issues of liability were to be resolved, the issue of training proficiency and the operational environment would still remain. It is important to note that other non-professional astronauts who have flown on the Space Shuttle (John Glenn, Jake Garn, Bill Nelson, Charles Walker, etc.) have undergone substantial amounts of training on every system and procedure they might encounter – much more than Mr. Tito has been through.

In a press release issued late on Monday NASA said that it “fully supports the commercialization of the International Space Station, provided that the safety and operational integrity
of the vehicle and crew are maintained at all times. To that end, NASA and the other international partners are in the process of establishing criteria for selection, training
and certification of non-professional station crewmembers on the International Space Station on a commercial basis. However, based on incomplete crew criteria and
unresolved operational and legal considerations, there is not enough time to prepare Tito for a safe Soyuz flight to the station in April.”

NASA has suggested (unofficially) that the operations environment during the time of the next scheduled Soyuz ferry flight (October 2001) would be much more conducive to a visit. This would also allow Mr. Tito to obtain the additional training required to meet the proficiency requirements needed to visit the ISS.

NASA has scheduled a press conference for Tuesday, 20 March at 3:30 PM EST at NASA Headquarters to discuss this issue. This press conference will be carried live on NASA TV – Watch it on SpaceRef.TV