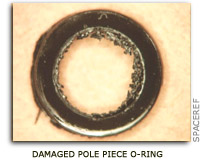 Earlier this year, in preparation for STS-101, NASA replaced a defective Power Drive Unit (PDU #006) in Space Shuttle Atlantis with one taken from Columbia which was undergoing maintenance in Palmdale, California. The PDU is used to operate the rudder/speed brake located in the Shuttle’s vertical stabilizer.

During acceptance for the PDU prior to its reuse, one of the actuator bypass solenoid valves failed. When the component was disassembled it was found to have a damaged O-ring with pieces of the O-ring distributed inside the component so as to prevent it from rotating properly. Further disassembly of the component found similar damage in other O-rings. The damaged O-ring and debris were removed, a new O-ring was installed, and the component passed inspection. 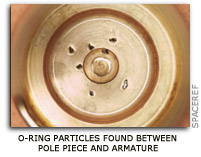 As NASA checked for other possible uses of this specific component, it was found that the yaw actuator for the center SSME (Space Shuttle Main Engine) on Space Shuttle Discovery also includes the same O-ring design. The design of this component was changed in 1979 and is apparently in use throughout the Discovery – with this one exception. The O-rings within the actuator in Discovery were examined and found to be in acceptable working order.

The actuator on Discovery has been certified for flight since: (a) no damage was found; (b) the actuator passed all required tests; and (c) failure of this solenoid valve to operate (energize) during launch can be compensated for with back up systems and procedures.

This issue will be discussed at the STS-92 FRR (Flight Readiness Review) later this week at which time Space Shuttle Discovery is expected to be certified for launch on the STS-92 mission on 5 October 2000.