NASA’s historic comet smashing Deep Impact probe used a swing by of Earth on Sunday evening (June 27) to set the probe on an altered course and enable it to chase a second comet speeding through space and thereby transmit a wealth of new scientific data during a rendezvous on 4 November 2010.

At 6:03 PM EDT on June 27, Deep Impact flew by Earth at a mere 18,900 miles (30,400 km) above the South Atlantic and gained a gravity assisted speed boost of 3,470 MPH (1.5-kilometer-per-second) to reshape its orbit and hunt down the new target, namely Comet Hartley 2 which has never before been visited by a spacecraft. This is the fifth and last earth flyby of the mission.

The swing-by maneuver tailored by the navigation team is vital in order to alter the trajectory of the spacecraft and propel it towards a close encounter with Comet Hartley 2 in November 2010. The three on board science instruments will already begin gathering new scientific measurements in September, a full two months prior to the rendezvous. The probe is equipped with two telescopes with digital color cameras and an infrared spectrometer to detect substance signatures.

The Deep Impact spacecraft created a history making celestial fireworks display when it smashed a companion projectile into Comet Tempel 1 on July 4, 2005 for the first time in human history and excavated several million kilograms of early solar system materials from inside the comet nucleus. The two instrumented spacecraft transmitted back stunning high resolution images of the cosmic collision showing plumes of water, gas and dust spewing from the comet and which attracted world-wide headlines and ignited an internet phenomenon.

The exposed cometary debris from the interior of Temple 1 was a scientific bonanza and it was analyzed in great detail and in real time by instruments on board Deep Impact and the companion impactor probe as well as by a coordinated world-wide earth and space based telescope observation campaign.

Scientists discovered water ice and a variety of inorganic and organic molecules which are some of the required components for the building blocks of life.

After the probe successfully survived the Comet Temple 1 encounter intact, NASA and the science team led by University of Maryland astronomer Michael A’Hearn, decided to recycle the spacecraft for a new extended mission and at a fraction of the cost of designing, building and launching a new space mission. A’Hearn is the principal investigator for both Deep Impact and the new mission dubbed EPOXI.

Temple 1 and Hartley 2 are both Jupiter family comets. Deep Impact was launched on a Delta 2 rocket on 12 January 2005. The Stardust probe will revisit Temple 1 in 2011.

EPOXI serves a dual role during the extended mission phase. The two new science goals are to search for extra-solar planets and to fly by a second comet. It’s name is derived from its two tasked science investigations — the Deep Impact Extended Investigation (DIXI) and the Extrasolar Planet Observation and Characterization (EPOCh).

“There is always some gravity boost at a flyby and in some cases, like this one, it is the main reason for a flyby. The last Earth flyby was used primarily to change the tilt of the spacecraft’s orbit to match that of comet Hartley 2, and we are using Sunday’s flyby to also change the shape of the orbit to get us to the comet,” said A’Hearn,

During the prior earth flybys of the Deep Impact/EPOXI spacecraft, the mission team used the on board instruments to find clear evidence of water on the moon and to study light reflected from Earth as a template that scientists eventually may be able be use to identify Earth-like planets around other stars. 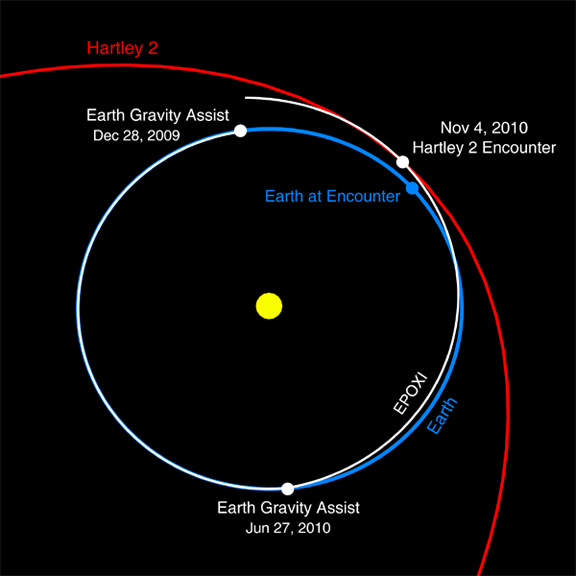 EPOXI is already in orbit (not shown) around the Sun. This graphic shows its trajectory starting from the 2009 Earth Flyby. The spacecraft will make its last Earth Flyby on 27 June 2010 before heading to its rendezvous with comet Hartley 2 (red arc) in early November 2010. 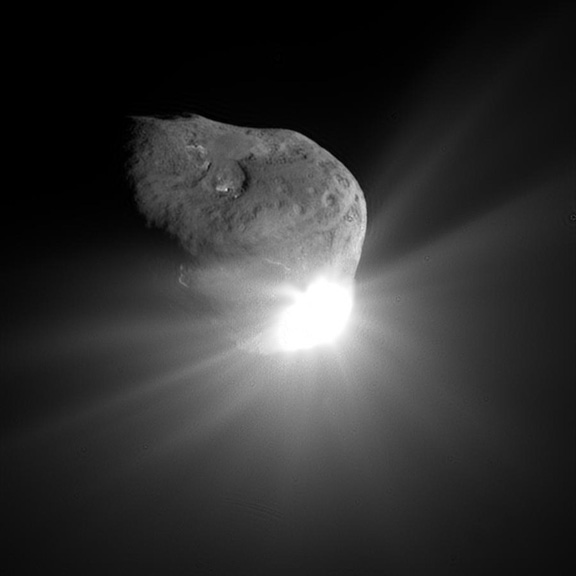 This image of comet Tempel 1 was taken 67 seconds after it obliterated Deep Impact’s impactor spacecraft. The image was taken by the high-resolution camera on the mission’s flyby craft. Scattered light from the collision saturated the camera’s detector, creating the bright splash seen here. Linear spokes of light radiate away from the impact site, while reflected sunlight illuminates most of the comet surface. The image reveals topographic features, including ridges, scalloped edges and possibly impact craters formed long ago. Credit: NASA/JPL