Counting Down to Atlantis’ Last Blast Off

Ken Kremer, for NASA Watch, 11 May 2010 – Kennedy Space Center: The Historic Countdown has officially begun for the last planned blast off of Space Shuttle Atlantis. The clocks at the Kennedy Space Center (KSC) began ticking down at 4 PM EDT today (Tuesday) from the T minus 43 hour mark towards a launch at 2:20 PM on Friday May 14.

KSC launch controllers reported to their consoles at 3:30 PM for the formal “call-to-stations” at the Launch Control Center to initiate preparations for liftoff of the STS 132 mission on Atlantis 32rd journey to the high frontier.

“Teams at the Kennedy Space Center and at other centers around the country have been working very hard to get this vehicle ready to fly, and I am happy to report everything is going quite well at [Launch Pad 39A],” NASA Test Director Steve Payne said at a media briefing on Tuesday morning. “Atlantis, crew and launch team are ready to go and looking forward to a beautiful launch Friday afternoon.”

When asked to reflect on this being Atlantis final flight, Payne replied, “Everybody realizes there’s a lot of history going on here and that they’re part of it and they’re living it. We are making a point of savoring this moment while we can. It’s really been a privilege for us to work on and be associated with this program”.

Shuttle Weather Officer Kathy Winters announced that the weather outlook for Friday is favorable with a forecast of “70 Percent GO”. Moderate temperatures into the 80’s are expected with the primary concern being for the possibility of a low cloud ceiling. It was a beautiful sunny day in Florida today and that favorable weather is expected to persist into the weekend.

Atlantis payload bay doors were closed today on her cargo of the Russian built ‘Rassvet’ Mini science research module (MRM-1) and a pallet of heavy spare parts which will be crucial for maintaining the operation of the International Space Station as a hedge against the looming date when the shuttles are no longer flying.

Four Russian representatives from RSC Energia were on hand at Pad 39 A to observe the final close out of ‘Rassvet’. In a standard procedure, final photos of the docking surfaces of ‘Rassvet’ were taken to document their condition after removal of the protective covers. Read my earlier report on the STS 132 payloads.

The six man crew of Atlantis flew into Kennedy on Monday (May 11) and arrived at the Shuttle Landing Facility at 6:49 PM in a squad of four T-38 jets. At the landing strip, Shuttle Commander Ken Ham made a brief statement to the media. “We are ready to launch. We’ve completed every bit of training we can and we’re confident. We appreciate all the hard work from the team down here. They’ve done an amazing job getting the vehicle turned around, on the pad and ready to go. We’re ready to fly! So look for a good show on Friday.”

In addition to Commander Ham, the crew comprises of Pilot Tony Antonelli and mission specialists Garrett Reisman, Michael Good, Steve Bowen and Piers Sellers. All have flow in space before. There are no rookies on this flight or any of the remaining flights. Today, Ham and Antonelli practiced shuttle landings in the Shuttle Training Aircraft, which is a modified Gulfstream II jet. 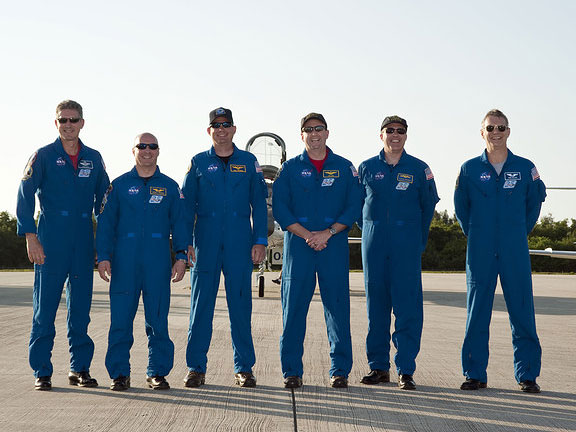