China Unveils its Plans For Space 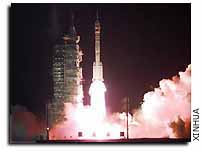 China parted the curtains today and allowed the outside world to have a peek at its plans for space exploration. In a document titled “White paper on China’s Space Activities“, issued by the Information Office of the State Council, China describes the directions it will take in commercial, scientific, and technological arenas of space exploration and utilization and how it plans to collaborate with other countries.

The paper looks back at China’s accomplishments since launching its first satellite noting that “China’s first man-made satellite, the “Dongfanghong-I” was successfully developed and launched on April 24, 1970, making China the fifth
country in the world with such capability. By October 2000, China had developed and launched 47 satellites of various types, with a flight success rate of over 90%.”

Mention is also made of the country’s independently developed launch vehicles including the Long March series which contains “12 types of launching vehicles capable of launching satellites to near-earth, geo-stationary and sun-synchronous orbits.” According to the paper Long March rockets “have accomplished 63 launches, and made 21 consecutive successful flights from October 1996 to October 2000.”

The one area where the White paper is least enlightening is the one most outside observers find the most interest in: China’s manned space program. China launched a test version of its Shenzhou spacecraft in November 1999 and is widely rumored to be preparing for another unmanned flight followed by a piloted mission perhaps some time in 2001. While not confirming these rumors the paper does say that China has “selected reserve astronauts” and that the first flight of Shenzhou symbolized “a breakthrough in the basic technologies of manned spacecraft and a significant step forward in the field of manned spaceflight.”

Also missing is any detail on the budgets required for China to accomplish the things it has planned. However it does describe new efforts to coordinate planning and increase the number of skilled personnel.

Much detail is provided on how China plans to expand its space science, earth resources, and navigation capabilities as well as its international and commercial launch services. In describing its commercial launch activity the paper notes that China has “successfully launched 27 foreign-made satellites for users in Pakistan, Australia, Sweden , the United States , the Philippines, as well as domestic users.”

The tone of the paper implies a certain confidence within China not only of its current capabilities but also of its ability to take on much more of a leadership role in the exploration of space in the new century. It is quite clear that China no longer wishes to utilize space simply for domestic purposes – it wants to be considered on a peer basis with more established space powers such as the U.S., Russia, Japan, and ESA. Moreover, the paper seeks to make certain that domestic and commercial space activity are linked with efforts to ensure national defense.

° Full Text of the “White paper on China’s Space Activities”

° Go Taikonauts! (aka Dragon in Space)