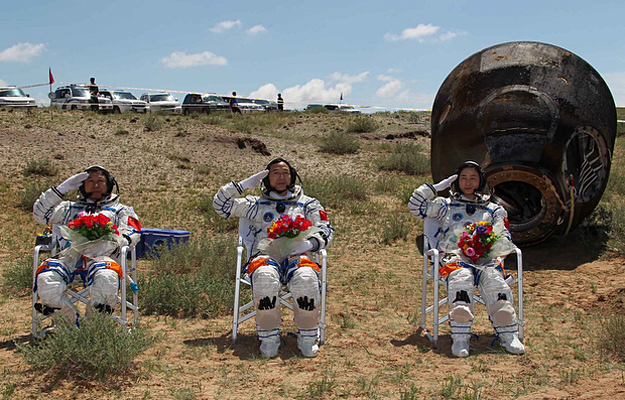 China is celebrating the safe return of three astronauts, who successfully completed a mission that included the country’s first manual docking in space and the first Chinese woman astronaut. Live television images of the Shenzhou-9 spacecraft’s return were broadcast around China Friday.

After re-entering earth’s atmosphere, a red and white striped parachute slowed the capsule so that it could safely touch down on its targeted landing site in Inner Mongolia. The vessel flipped over when it hit the ground, but the three astronauts aboard were unhurt. They spent more than half an hour re-adjusting to Earth’s gravity before emerging.

Astronaut Liu Wang said it is really good to once again feel the ground beneath his feet. He added that he is also glad to be home safely.

The Shenzhou-9 docked with the Tiangong-1 laboratory spacecraft, which is orbiting more than 300 kilometers above Earth. Liu Yang, China’s first woman astronaut in space, said she felt at home on Tiangong-1, where she and the other two astronauts lived and carried out experiments for nearly two weeks. She says she feels very happy, and is very proud of her country.

Chinese Premier Wen Jiabao and other top Chinese leaders watched the landing from the Beijing command center. Afterwards, Wen read out the government’s letter of congratulations to the astronauts and to all the people who worked on the mission.

He says the successful manned docking mission of Tiangong-1 and the Shenzhou-9 spacecraft marks a milestone and major breakthrough in China’s quest to master space docking technology. He added that it also marks a decisive step forward for China’s space strategy and accomplishments on the world stage.

Shenzhou-9 was launched on June 16. The official Xinhua news agency says the successful mission is an important step in China’s plans to establish a permanent manned space station around 2020. [VOA]