when we sold sim, years ago, it was sold and designed as a machine that would primarily find gas giant planets, and, if you were within a tiny, tiny fraction of the galaxy, namely within 30 light years of the sun, you had a shot of finding a few 3 earth mass rocky planets, maybe, if they exist. how did this suddenly get translated into “SIM project will search for Earth-like planets orbiting nearby stars…” in the newly minted NASA Strategic Plan on page 12? Has physics changed? Is it different on the West Coast vs. the East Coast? Seems like a bit of a stretch of the truth considering most of the planets that a SIM will find are gas giant sized. Again, since I started this program as Origins Director, got it funded and sold it year after year as AA/OSS, and, I am an astronomer, I believe some forces are “stretching” the truth here. Kepler finds earth-like planets! I would hate to see that CRITICAL mission short-changed as the “real” earth finder and statistics builder.

Just a plea for truth in advertising in these interesting times…Plus… if Kepler shows us that earths are very rare, say 1 in a million stars… some might say we can forget SIM since it “looks for earth-like planets” in a tiny fraction of the galaxy!

Editor’s note: This response to Weiler’s comments was submitted by SIM Mission Scientist Geoff Marcy, UC Berkeley and was published on NASA Watch on 15 March 2006:

Dear Ed, In response to your recent email about SIM as reported on NASA Watch, I thought it would be useful to remind you of the goals of the SIM investigations that were selected while you were Associate Administrator for the Office of Space Science at NASA Headquarters. In 2000, you oversaw the selection of two Key Projects for the SIM mission that had the explicit goal of finding Earth-mass planets in the habitable zones of nearby stars. I applaud your foresight in choosing those lofty goals for SIM. The NASA-led peer review process ranked as Category I (the highest possible grade) two proposals submitted by myself (and my team at UC Berkeley) and by Dr. Mike Shao (JPL). These proposals had the specific goal of finding planets with masses as small as a few Earth-masses. The approved investigations had two main thrusts: 1) carrying out a deep survey of 250 stars to look for the smallest possible planets, i.e. a few earth masses; and 2) carrying out a survey of some 2,000 more distant stars to reveal the architecture of planetary systems by looking for planets with masses ranging from Jupiters (318 Earth masses) to Uranus (14 Earth masses).

Since your explicit endorsement in 2000 of the SIM search for Earth-like planets, the primary goals have not changed, either in the area of planet finding or in the other areas of general astrophysics that SIM will investigate through the 8 other Key Projects selected through the same NASA peer review process. The scientific goals of SIM were endorsed by two Decadal Review Committees of the National Research Council. Indeed, the NRC Decadal Report from 2000 states, “Measuring positions on the sky with unprecedented precision, SIM will enable the discovery of planets much more similar to Earth in mass and orbit than those detectable now, and it should permit astronomers to survey the Milky Way Galaxy 1,000 times more accurately than is possible now.”

The scientific performance of the present, redesigned version of SIM has been endorsed by the SIM Science Team (unanimously) and by the National Academy’s Committee on Astronomy and Astrophysics. The technical and programmatic readiness of SIM has been demonstrated through a series of engineering milestones to the satisfaction of several independent NASA review boards. SIM is technically ready for a launch in 2011 although budget pressures have forced a slip in SIM’s launch date to 2015. 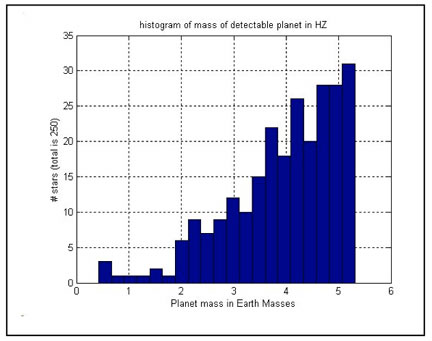 The figure [above] plots the number of stars around which a planet of a particular mass could be found in its habitable zone, if such planets exist. Thus, there are 45 stars around which SIM could detect a planet of 3 Earth-masses or lower. Furthermore, the figure shows that SIM can easily detect a terrestrial planet (roughly taken to be 10 Earth masses or lower) around every one of the 250 stars in the deep searches to be conducted by the Marcy and Shao Key Projects. SIM remains the only NASA mission capable of discovering terrestrial worlds around nearby stars.