By dennis_wingo
May 7, 2008
Filed under General Story

As an example of this approach, there was an excellent study undertaken by the European Space Agency (ESA) in the 2003-2004 timeframe about a European lunar and mars effort. (This study, Europe 2025, was printed but never publicly released). In this study, a founding premise was to pretend that NASA and the U.S. space program did not exist and then figure out from there what a European lunar effort would look like. It was a completely different look from what NASA has proposed for the past 40 years. The most interesting parts were that they would put the outpost on the far side of the Moon and have crews stay there for extended periods. This would provide a psychological separation from the Earth and ESA would study how the social system and thought patterns of the crew evolved over the time period of a nominal Mars mission. They also had a focus on developing local resources as a test of self sufficiency. This was an amazing study and it is sad that ESA never released it.

This missive will take a similar approach to an effort to bootstrap (begin with a minimal system and expand from there) a lunar effort as a thought experiment to see what kind of architecture, lunar surface systems, and end results might be. This is a multipart effort that will begin here and continue to build a gestalt that makes for a coherent whole. The following assumptions will be made:

The purpose of this is to inject some new ideas into what seems to be a tired merry-go-round of government efforts to open up the space frontier. Those of us who are from the post baby boomer generation are not content with a few government astronauts getting to hop around on the moon (as nice as the astronaut corps are as people) but to foster the necessary conditions to where economic development and cultural progress can begin “out there” while contributing to solving our global civilization’s problems here. We are not content in getting to the year 2100 in a poverty stricken horse and buggy because our problems here are “too complex” to solve. We see the solution in developing the vast resources of our solar system in a manner that can provide a dramatically improved standard of living to ourselves and our global posterity. The problems that we have are complex and are not going to be solved overnight but the solutions are out there. 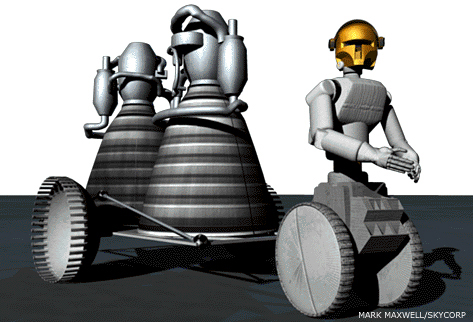 First of all, if economic development is the game, then only game in town is the Moon. Mars is far too far away, both in distance, time, and money to even consider for any kind of quasi private effort. This is likewise true of the Near Earth Objects (NEO’s). So, what can be done at the Moon that has any possibility of economic return? First of all a definition here is that this is not the same economic return timeframe as a Venture Capital Investment. In this discussion fifteen years is the horizon. Second is that no serious study of this subject will make the claim that today we can make the Moon profitable in that time based upon our current state of knowledge about lunar resources. This first part elaboration will dwell on some tactical themes designed to lower up front costs and bring the day of break even as close as possible.

Ideas to Lower the Cost of the Effort

The first thing to attack is the military industrial complex focus on radiation tolerance for integrated circuits. This one thing has driven the cost of space projects higher and higher as designers have to use several generations old microprocessors, and all types of integrated circuits. This is because there are specifications that individual chips have to meet for latch up and single event upsets. Since most off the shelf (COTS) chips are not particularly radiation hardened, this means that for hardware that goes through the radiation belts or is used in environments where radiation might be a problem that you have to modify existing chip designs to harden them.

This is enormously expensive and the market for these chips is very small in comparison to the commercial market so the number of advanced chips flying is actually very small and the tendency is that the current generation of space qualified chips are several generations behind their commercial brethren with the gap growing year by year. This is why the International Space Station is controlled by 80386 25 Mhz microprocessors that were obsolete in the commercial world in 1992. What it also means is that the tools for software development are ether generations behind as well or are very poorly designed as it is much more expensive for these systems with a very limited market and installed base.

This has been the case since the early 1990’s as the amateur radio satellites proved when they basically completely abandoned the concept of space qualified and successfully flew advanced chips. They were able to do this via the concept of shielding the chips with tantalum or other chip and box level shielding techniques. It costs a little weight but with the advances in chip technology, software, and software systems, the total systems costs can be dramatically lowered.

An example of one government organization that understood this was the Strategic Defense Initiative Organization’s Clementine mission in 1993 that flew commercial state of the art processors and dynamic RAM memory for the imaging system. It worked fine but the military spec RAD 3000 had a software glitch that opened up a thruster and ended the mission before they could go to an asteroid after successfully operating in lunar orbit for several months. More recent software errors have reportedly crippled much more expensive spacecraft. Today with software growing to as much as 1/3 of the total cost of an advanced spacecraft major savings can be accomplished and schedules compressed by using this approach. So that iPhone that you love may be your communicator on the Moon! The European Space Agency was able last year to get NASA to agree to using the advanced technology of Wi-Fi and the Internet protocol for the lunar outpost. This was a celebrated victory. 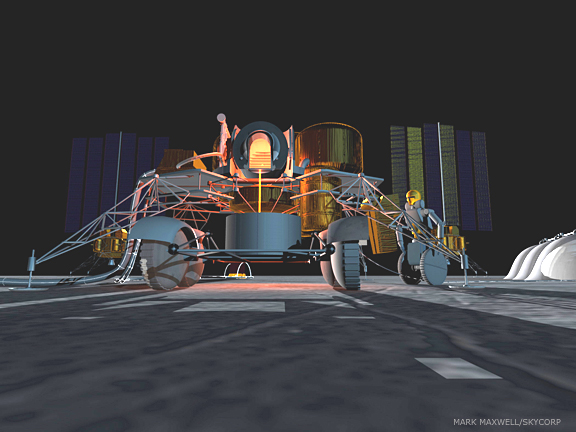 The advent of the IBM PC in August of 1981 fundamentally changed the world of computers and computing. It did this for a simple reason, open standards where anyone could build a card, a bus, or even a clone of the original. Until the IBM PC, computers were expensive, proprietary, and the industry fragmented, just like today’s military industrial complex. It took a while, but within a couple of years the industry exploded and as a result the industry when from less than a billion dollars in revenue per year to a multi-hundred billion dollar a year global business. We must do the same thing with space.

Today in advanced spacecraft design software can be as much as 1/3 the overall system cost as each new spacecraft with unique capabilities are built largely from scratch. There is no reason for this to be the case. There is absolutely no reason at all that we cannot use the same software and hardware for manned spaceflight and the return to the Moon that this missive is written on. There are those that say that you need to have real time multi-taskers for space hardware. The number of times that this is necessary can be counted on one hand and there is a plethora of extremely inexpensive digital signal processors that can trivially handle the most demanding real time tasks today.

The suggestion is that NASA, ESA, and other interested parties work with the IEEE standards committees to work out the minor changes to today’s standards for mechanical interfaces that would enable all of the current electrical standards to be used for spacecraft hardware. The variances would be associated to making sure that the interface mechanical hardware could withstand the rigors of thermal variations and vacuum that space hardware sees. The advantages that this would bring to space and to the return to the Moon would be enormous and in concert with using state of the art chips, and software would easily reduce the cost of exploration by an order of magnitude.

A smart way to implement this would be to have a standard I/O bus for computers such as any number of IEEE standards such as the PCI bus. This would lead to great advantages for spares on the lunar surface as well. Imagine if you will that the avionics for a lunar cargo lander has common hardware with a habitat’s environmental control system, which is also standard with a rover or other surface hardware. Now when that lander lands the crew strips off all of the common hardware and it becomes spare parts for the outpost. This concept is called Effective Delivered Mass (EDM).

An analysis of this concept by our Lunar Industrial Working Group (LIWG) indicates that as much as 50% of the dry mass of a lunar cargo lander could be converted into spare parts and other common parts that could be used by the outpost in various ways. Since it is estimated that the cost of landing a kilogram of hardware on the Moon is as high as $200,000 the advantage of this approach should be obvious. For example a Delta IV heavy launch vehicle can place about 3600 kg of standard payload on the surface. A rule of thumb is that the dry mass of the cargo lander is about half that or 1800 kg. If half of that, or 900 kg can be used as common hardware with other aspects of the lunar outpost, we have saved 180 million dollars in launch costs on a single mission. The advantage of this approach, as we used to say in college, should be intuitively obvious to the casual observer.

For a non NASA, industrial approach to lunar development, this type of thought process is absolutely imperative. It should also be incorporated into NASA’s thinking in that the money that is being spent to return to the Moon is coming out of taxpayers pockets. This is why ideas such as have briefly been presented. We must think different in going to the Moon if we do not we simply are not going to go. In designing standardized avionics and other hardware we can do things like carefully select materials for structural components that have useful properties on the Moon.

For example if we make a lunar lander’s structural components from carbon-carbon composites then we can extract say 200 kg for a Delta IVH class lander in carbon, as much as 1000 kg for a human lander (descent stage). Since good carbon steel is only about .2-.5% carbon that would provide enough material for 20,000-100,000 kg of steel (using nickel to substitute for manganese from a Delta IVH class lander and up to 500,000 kg of steel for a human lander descent stage.

If we had 500,000 kg of steel we could enclose a very 100 x 100 x 20 meter internal volume and then cover that volume with regolith. That area could use piped in light from the permanently lit area to grow a tremendous amount of food. If the internal volume was partitioned you could grow food in different optimum climates and generate enough food to feed dozens of people. Where would the iron and silicon for the steel come from? Tune in next time for advanced ISRU for lunar bootstrapping.