Last weekend I attended the DARPA/NASA 100 Year Starship Conference in Orlando. It was apparent to me – almost instantly – that the underlying memes, core concepts, etc. at this event had a resonance with space colony studies – prompted by Gerard O’Neill – and supported by NASA – in the 1970s. One of the session leaders of the conference was Stewart Brand – known most famously as the editor of “The Whole Earth Catalog” – a radical departure in publishing that set the stage – on cheap paper – for what would eventually become websites. My father was a regular contributor. Decades later a friend mentioned that he had picked up a well-worn copy of the Whole Earth Catalog as a Peace Corps volunteer in Micronesia and had seen my father’s comments. Small world.

I know Stewart Brand from my days in the 1980’s as a member of Governor Jerry Brown’s political staff. Indeed, Brand was part of our semi-official traveling entourage to the STS-1 launch in 1981. I knew that he’d be at this conference and I brought my hard copy of his book “Space Colonies“ with me. I carried this book with me all over the U.S. when I worked for Jerry Brown’s 1980 Presidential campaign and consider it to be one of the more influential things I have ever read. 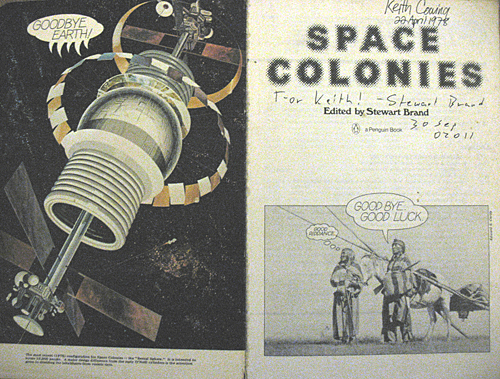 I eventually caught up with Stewart Brand in the hallway at the Starship conference. We re-connected for a moment and I then pulled out my copy of “Space Colonies” and asked for an autograph. He chuckled in agreement with my observation that the things people were saying at the Starship conference resonated with what “Space Colonies” set forth some 30 years ago. When I started to recite a quote by Anne Herbert from “Space Colonies” – he cut me off mid-sentence and finished it. “The Sky begins at your feet, think how brave you are to walk around”.

In 2005, Steve Jobs gave the commencement speech at Stanford University. Video of this speech, which was rather prescient and profound, has been airing non-stop tonight. Millions have seen it on YouTube. As Jobs concluded his comments he said:

“Your time is limited, so don’t waste it living someone else’s life. Don’t be trapped by dogma — which is living with the results of other people’s thinking. Don’t let the noise of others’ opinions drown out your own inner voice. And most important, have the courage to follow your heart and intuition. They somehow already know what you truly want to become. Everything else is secondary. When I was young, there was an amazing publication called The Whole Earth Catalog, which was one of the bibles of my generation. It was created by a fellow named Stewart Brand not far from here in Menlo Park, and he brought it to life with his poetic touch. This was in the late 1960’s, before personal computers and desktop publishing, so it was all made with typewriters, scissors, and polaroid cameras. It was sort of like Google in paperback form, 35 years before Google came along: it was idealistic, and overflowing with neat tools and great notions. Stewart and his team put out several issues of The Whole Earth Catalog, and then when it had run its course, they put out a final issue. It was the mid-1970s, and I was your age. On the back cover of their final issue was a photograph of an early morning country road, the kind you might find yourself hitchhiking on if you were so adventurous. Beneath it were the words: “Stay Hungry. Stay Foolish.” It was their farewell message as they signed off. Stay Hungry. Stay Foolish. And I have always wished that for myself. And now, as you graduate to begin anew, I wish that for you. Stay Hungry. Stay Foolish.”

When I worked for Jerry Brown I had the opportunity to meet Steve Jobs several times. He was both calm and hyper. I also spent some time in the early 1980s living in a house in the Santa Cruz Mountains south of San Jose across a small valley from where Apple co-founder Steve Wozniak lived with his llamas and hot air balloons.

Oh yes, I am an unrepentant, multi-decadal Mac fanboy.

Stewart Brand autographed my copy of “Space Colonies” mere days before Steve Jobs died. I cannot help but link these events together. Steve Jobs was only 6 months older than me. I am certainly not done with life. Given his tectonic impact, he was clearly not ready either – even if he had faced his fate.

I felt a profound disturbance in The Force tonight – one that begs for an answer.