Space Shuttle Atlantis thundered to space today, May 14, for her last blast to the High Frontier. The STS 132 flight is Atlantis 32nd and final planned mission. Her journey with a lucky crew of six eager and experienced male astronauts began with a ground shaking rumble at 2:20 PM EDT from Launch Pad 39 A at NASA’s Kennedy Space Center in Florida.

NASA currently plans to retire the three orbiter shuttle fleet by the end of 2010 or early 2011, while the shuttle program operates like clockwork at the absolute height of its capabilities and safety. Beyond that lies a period of unknown length until humans again fly to space from American soil.

Atlantis is destined for the International Space Station (ISS) and will deliver a beautiful new science and docking module built in Russia at a cost of $200 Million, crucial spare parts to help extend the usable working lifetime of the ISS and science gear to conduct an expanding array of research experiments. The varied national origins of the cargo vividly exemplifies the international partnership and funding of the station program.

A blazing fire and crackling roar shot from her rear after ignition of the twin Solid Rocket Booster (SRB’s) and trio of Space Shuttle Main Engines (SSME’s). As she bounded off the pad and cleared the tower, the intensity of the yellow flames grew magnificently as I watched in awe from the KSC Press Center about 3 miles away. That’s as close as human spectators are allowed.

The near deafening roar grew louder as Atlantis accelerated straight up and reached a maximum crescendo starting some five seconds or so after blastoff and put on a spectacular sky show for hundreds of thousands of local area residents and tourist spectators and media who gathered at Florida’s Space Coast from countries across the globe.

About 40,000 eager and enthusiastic folks alone were crammed into the Kennedy Space Center to watch from a prime viewing location. Many thousands more were camped out along the Atlantic coastal beaches. Local hotels were once again filled with tourists to witness a thrilling experience that will soon be no more.

The 4.5 million pound vehicle lifted off precisely on time on 7 million pounds of liftoff thrust, to coincide with the moment when the Earth’s rotation carried the launch pad into the plane of the space station’s orbit as the ISS was flying above the South Pacific. Atlantis then quickly arced over as she sped in a northeasterly direction up the east coast of the United States.

The eight and one half minute climb to orbit begins a two day pursuit of the ISS. Rendezvous and docking at the orbiting laboratory complex is scheduled for Sunday morning at 10:27 AM EDT. In the meantime, the crew will focus on inspecting the critical heat shield tiles which protect the orbiter from the scorching heat of reentry at the conclusion of the flight.

The planned 12 day flight features three space walks which are devoted to installing the spare components brought aloft by Atlantis onto the outside of the station. The equipment is packed on a carrier loaded inside the payload bay. Items include a back up 6 ft wide KU-band communications antenna, 6 fresh Ni- H batteries and apparatus for the Canadian built Dextre robotic arm.

“I would really like to thank the team who prepared Atlantis. Their work has been phenomenal especially with the compressed schedule flow due to weather delays,” said Bill Gerstenmaier, NASA associate administrator for space operations, at the post launch KSC press briefing. “The folks have given us a great launch. The vehicle looks like it’s in really clean shape, ready to go do a pretty challenging mission in front of us with difficult EVA’s.”

“I would like to thank all the workers,” added Alexey Krasnov, chief of Piloted Programs Directorate, Roscosmos, the Russian Space Agency. “Every launch is a great experience. I think Atlantis is telling us; Please use us again !”

“I congratulate TEAM Atlantis today on a great job. We are very proud of the whole team who proved they could meet an aggressive schedule,” said Launch Director Mike Leinbach. “I’m very, very proud of the team. It’s the start of a good mission.”

Only 2 shuttle launches remain on the launch manifest until the Space Shuttle program is terminated and the 3 orbiters are distributed to museums around the US to be gazed upon by adoring crowds but then cannot accomplish the space exploration goals for which they were designed and are fully capable of still accomplishing.

Although STS 132 is the last planned launch, Atlantis will be processed one more time as a standby “Launch on Need” rescue vehicle (STS 335) in case an emergency situation arises during the final planned mission, STS 134, which would require that crew to take safe haven aboard the ISS until they could be brought back to earth by the rescue mission. NASA has all the hardware required, External Tank and 2 SRB’s, to mount another mission.

For many months, NASA managers have evaluated the possibility of converting the potential STS 335 rescue mission into a new additional shuttle flight, dubbed STS 135. Only money and approval from the Obama Administration and Congress stands in the way.

Bill Gerstenmaier said today that, “NASA would like to have a decision from the Administration by about June 2010, so that the potential new mission could be flown by June 2011”.

Florida Senator Bill Nelson, who attended the STS 132 launch, spoke informally to the media at the KSC Press Center and said he personally spoke to President Obama to ask for this additional shuttle flight and he is also working with his Congressional colleagues to approve the necessary funding. 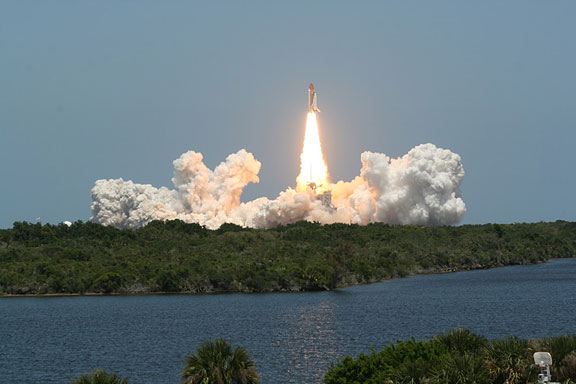 Atlantis blasts off with 6 man crew at 2:20 PM EDT on 14 May 2010 from Launch Pad 39 A at NASA’s Kennedy Space Center in Florida. Atlantis will link up with the ISS on Sunday, May 16. Credit: Ken Kremer 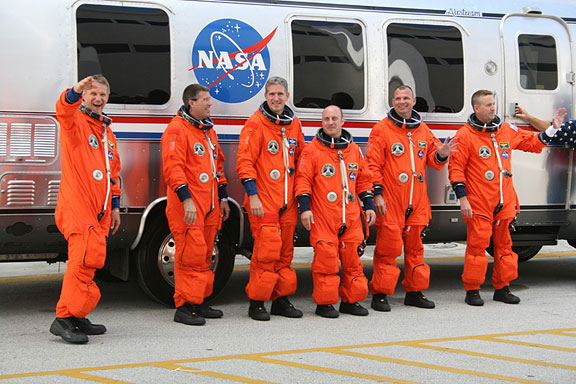 At the Operations and Checkout Building at the Kennedy Space Center, the STS 132 astronauts pose for a group portrait in their orange launch-and-entry suits in front of the Astrovan which will transport them to Launch Pad 39 A. From left are Mission Specialists Piers Sellers, Steve Bowen, Michael Good and Garrett Reisman; Pilot Tony Antonelli; and Commander Ken Ham. Credit: Ken Kremer 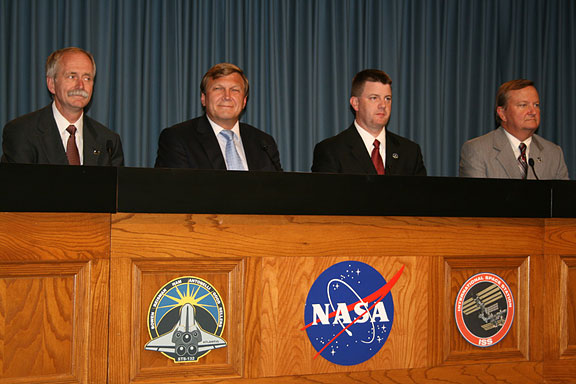 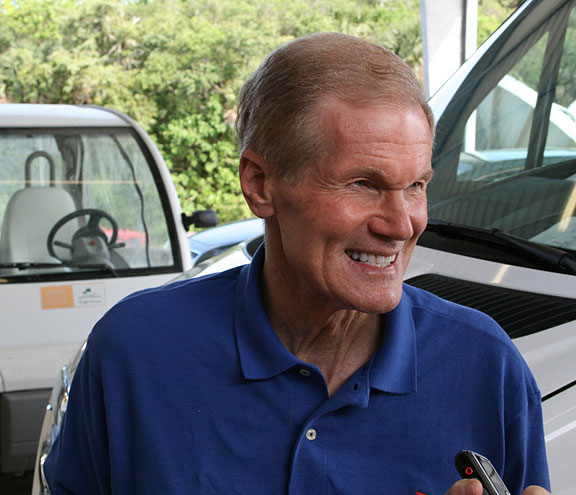 Florida Senator Bill Nelson attended the STS 132 launch. Nelson spoke to the media at the KSC Press Center and said he is urging President Obama and his Congressional colleagues to approve an additional Space Shuttle mission for NASA with the necessary funding. Credit: Ken Kremer 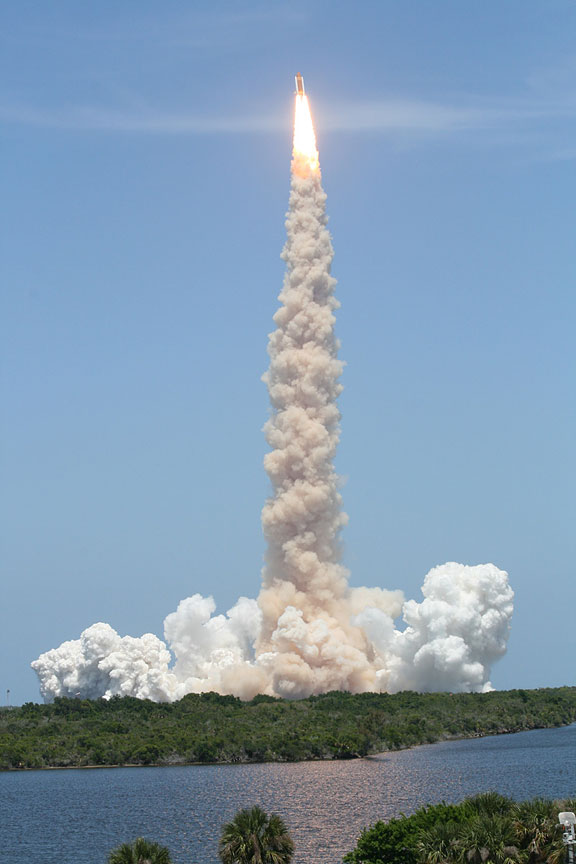 Atlantis soars to Space on 14 May 2010 carrying the Russian ‘Rassvet” research module and critical spare parts and is destined for the International Space Station. Credit: Ken Kremer