NASA Shuttle managers met early this morning and then announced a unanimous “GO” for launch of Atlantis on her last planned flight to space at today’s (May 12) press briefing at the Kennedy Space Center. There are no technical issues standing in the way of a launch from pad 39 A on Friday, May 14.

“Everything is looking great. The vehicle is in great shape out at the pad,” said Mike Moses, chair of the Mission Management Team. “We really had nothing to talk about. In fact, I stretched the meeting out to 18 minutes long today. It was a challenge! From a Space Shuttle Program and ISS Program standpoint, we’re ready to launch Atlantis and get this mission under way”.

“This mission will be carrying up a whole lot of shuttle Mid-deck science experiments. We added a lot of science. In fact we call it ‘Sortie Science’. They will be run on the station for a few days to take advantage of the extra hands of the ISS crew members and then brought back down to earth on this mission”, explained Moses.

“We are flying up alot of our National Lab Pathfinder (NLP) vaccine program experiments”, added Moses. A major science focus will be studies on developing potential vaccines for the prevention of infections caused by different pathogens. “JAXA [the Japanese Space Agency] is sponsoring many science payloads”.

Launch Director Mike Leinbach said, “We are not tracking any issues right now at all that would prevent an on-time liftoff Friday. Team Atlantis is really hitting its stride right now and clicking on all 8 cylinders.”

I can report that it was a gloriously warm day here at the Cape as the sun shone down on Atlantis amidst scattered clouds.

Shuttle weather officer Todd McNamara confirmed that the weather outlook remains at 70% favorable and the only concern is for a violation of the low cloud ceiling criteria. Leinbach said the team can launch until May 18. Fuel cell cryogenic loading started today.

Early this morning, the last prerequisite to launch was achieved when the ISS crew of Oleg Kotov, T.J. Creamer, and Soichi Noguchi relocated their Soyuz TMA 17 capsule by boarding and undocking from the Poisk module and flying to a new port on the Zvezda module. This cleared the path for berthing of the new Russian- built ‘Rassvet’ module, or MRM-1, being carried aloft as the principle cargo inside Atlantis payload bay.

Watch for my onsite report and pictures late Thursday after the mammoth Rotating Service Structure, now enveloping and protecting Atlantis at the launch pad, is retracted in advance of the commencement of cryogenic fueling operations overnight Friday. 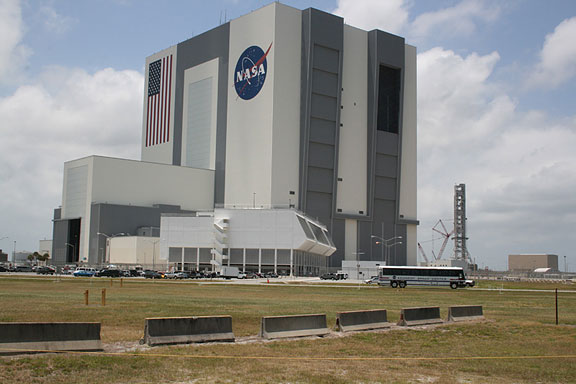 The iconic Vehicle Assembly Building (VAB) dominates the skyline at the Kennedy Space Center. Shuttles are prepared for launch inside the VAB. The firing room is located in the Launch Control Center (center) in front of the VAB. The new Ares 1 mobile launcher (at right) was under construction in a lot adjacent to the VAB. The proposed termination of Project Constellation and the Ares 1 rocket by President Obama has been harshly criticized by key members of Congress and many Apollo era Astronauts and managers. Credit: Ken Kremer 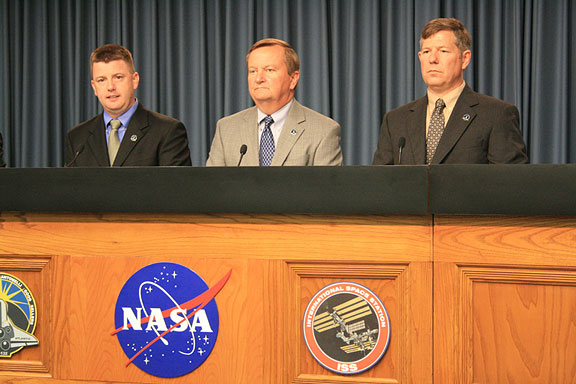 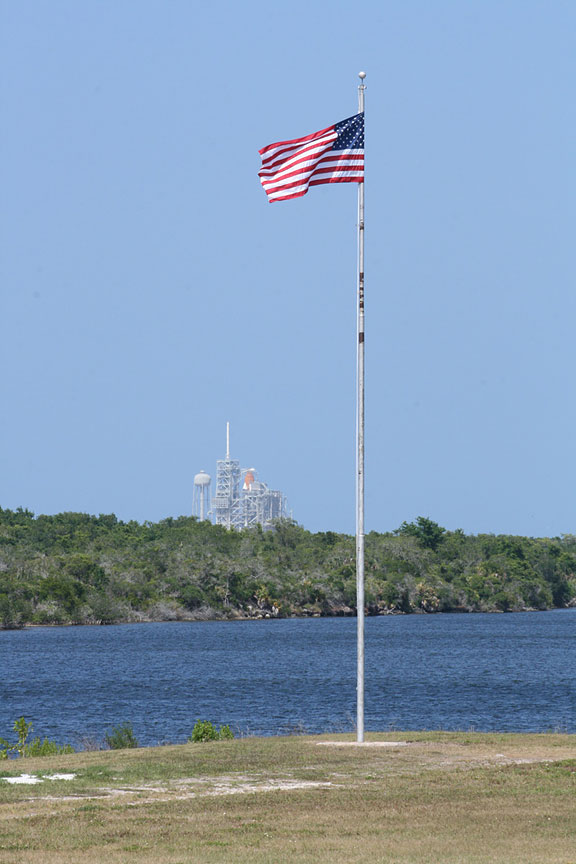 The sun shines on Atlantis at Pad 39 A; My view from the Kennedy Space Center Press Center today, May 12. The massive Rotating Service Structure (RSS) which protects the shuttle from the elements will be retracted on Thursday (May 13). Credit: Ken Kremer