Building on the success of their first static-fire, Alliant Techsystems (ATK) and NASA are preparing for the second Ares I first stage five-segment Development Motor (DM-2) test. As engineers and technicians prepare for the test, scheduled for September 2, the question is – will there be a use for it should the just announced NASA reauthorization bill passes? “Every test we do on these SRBs has relevance,” said George Torres the Vice President of Alliant Techsystems’ Aerospace Systems, “whether it’s a new heavy-lift rocket or a crewed vehicle, that information gets utilized in some fashion.”

The Ares I First Stage is one of the largest solid rocket motor ever constructed. It was designed with special attention paid to astronaut safety while providing a reliable launch capability for both crew and cargo missions. The motor itself is some 154 feet long and about 12 feet in diameter and is currently lying on its side on a specially-built test stand in Utah. Once this test is completed the results will be compared with both the first DM ground test conducted on Sept. 10, 2009 and the Ares I-X test flight which took place on Oct. 28, 2009. 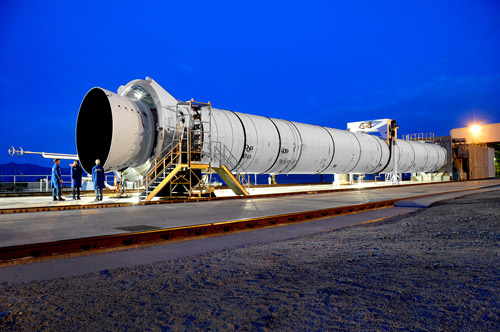 The five-segment booster sits in its specially-designed test stand awaiting its test firing currently scheduled for Sept. 2. The information gleaned from this test will be compared with the DM-1 test as well as the Ares I-X test flight last year. Image Credit: ATK

The foundation of the five-segment booster is the space shuttle’s solid rocket boosters (the shuttle’s SRBs only have four segments). While their design may be based off the space shuttle’s SRBs – these new boosters have been designed and built with modern technologies and materials. The SRBs that the space shuttle uses, while improved and updated are still based off a design over thirty years old. There are a number of differences between the Ares boosters and the ones that the shuttle uses. Some of these include the addition of the fifth segment, changes to the propellant grain, a larger nozzle opening and upgraded insulation and liner.

The first stage has been designed to be recovered and reused. This will allow engineers with NASA and ATK to retrieve vital performance data to prove the design’s viability. Some of the elements of the booster’s design that the ground test will seek to verify include:

– Validation of the improvements made to the insulation, liner, propellant and nozzle systems.
– Provide data that can be used in future test flights leading to heavy-lift development and design.
– Compare with data collected from the Ares I-X flight to further the design of the roll control system. 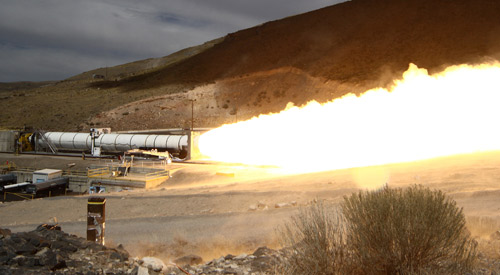 The DM-1 test was conducted on Sept. 10, 2009 to prove out the configuration’s design. Lessons learned from both the static-fire tests as well as the test flight of the Ares I-X are incorporated into the design of subsequent boosters. Image Credit: ATK

Technicians at ATK are currently in the process of instrumenting the five-segment rocket with sensors and gages to collect measurements on over 750 data channels. This information will be utilized to evaluate the booster’s performance. The full-scale motor test will work to advance the qualitative performance of these boosters. When fired, the motor will produce 3.6 million pounds of thrust. Utilizing the in-line configuration with a single five-segment solid rocket motor first stage and liquid upper stage, this launch vehicle is designed to lift more than 54,000 pounds of payload directly to low-Earth-Orbit (LEO).

“With each test we learn more and more, there are 750 data sensors connected to this vehicle (the DM-2) that are funneling us information.” Torres said.

Unlike the end of the Apollo Program, where the U.S. knew what its next program was, (the space shuttle) it is unknown what will follow the shuttle program as the White House and Congress try to decide what to do next. With the Senate Committee on Commerce, Science and Transportation unanimously passing the NASA Reauthorization Act of 2010, many of the president’s proposals for the space program could be countered. Within this bill is the authorization for the development of a shuttle-derived heavy-lift rocket to be placed on the fast track. The fact that a shuttle-derived heavy lift rocket is part of the bill is very important to ATK.

If the bill becomes law ATK would most likely be the company selected to produce the boosters for this system and it would ensure the viability of the company for some time. However, many details have not been fleshed out yet. As this highly-fluid situation roils back and forth, ATK will have to sit and wait to see how the details are handled. While the initial announcement seems promising the solid rocket manufacturer has learned to be patient when dealing with Washington.

In an interview with the Salt Lake Tribune former NASA astronaut and current manager of ATK’s space launch systems, Charlie Precourt stated that he considered the vote to be a crucial first step in confirming that NASA will continue utilizing solid rocket engines in their heavy-lift launchers. He also noted that this bill was vital in keeping many workers with the aerospace company employed.

“The company employs 3,100 people in Utah, many of whom work on the aerospace side, Precourt said. Asked how many jobs could be saved if this strategy works, he responded: “It’s in the thousands.”