Astronaut Scott Parazynski: Many Small Steps to the Summit of Mt. Everest

By Keith Cowing
May 16, 2008
Filed under General Story

Its “Late Night With Scott” Again

15 May 2008: Scott Parazynski called me tonight at 11:37 pm EDT. After a month of these calls from the other side of the planet, my wife and I are getting used to them. The Caller ID simply says “Out of Area” i.e. Nepal, Everest Base Camp. “Must be Scott” my wife often says. Then again she’s used to me being up near the North Pole on Devon Island.

Scott is totally pumped and ready to go. I can feel the energy over the bad satphone connection. Or is it the chocolate covered expresso beans I sent him?

This may be the last phone call I get until after he summits. I might get one from Camp 2 on the way up.

Where No Astronaut Has Gone Before

As it rains outside here in soggy northern Virginia near sea level, Scott is in a spartan alpine environment 3 miles high. Quite a contrast in our locations. Yet, by further contrast, where he will soon be is one of the most extreme environments any human can traverse on our planet – and hopefully live to tell the tale. Scott is about to walk up to a place where the jet stream often visits – cruising altitude for jet airliners.

Scott has made five rides to orbit. While some psychological energy is certainly needed to make that trip, physically, you just lie back and wait. Yet the risks are very real. In contrast, on Everest, Scott will be exerting himself to the limits of what his body is capable of doing.

Either way, the journey is risky, but the rewards are manifest.

Earlier today I sent an email to one of his team to relay to Scott. In it were messages from folks who had posted items on NASA Watch and OnOrbit.com – including many astronauts and Scott’s parents. Scott said that reading these short thoughts “really lifted my spirits”. So to those of you who replied – you done good – keep it up!

EVA To The Summit

Scott says that he expects to leave Everest Base Camp tomorrow morning (17 May) at 3:30 am local time to begin his climb to the summit of Mt. Everest. “When I head out of the vestibule of my tent it will be like heading out of the airlock hatch aboard the International Space Station for an EVA” he said. “I will be wearing my bulky red summit suit. I will have clumsy mitts on, an oxygen mask, and my body will be covered from head to toe with gear, patches, and other things – just like being out in space.”

Image below: this is Scott’s summit jacket. Among the patches are one that symbolizes the crews of Apollo 1, Columbia, and Challenger; the Challenger Center for Space Science Education, Autism research, and the American flag Scott wore on his spacesuit during his STS-120 EVA. 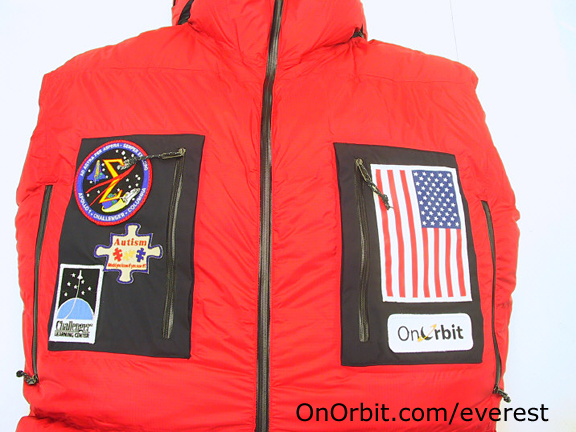 As he has done many times in the past month, Scott will begin his climb by immediately dealing with one of the most treacherous portions: the Khumbu icefall. This huge glacial feature, located right above Everest Base Camp, is constantly on the move with house-sized pieces of ice falling over on a regular basis. To allow climbers and porters to traverse the crevasses that form, sherpas or “Ice Doctors” rig a series of aluminum ladders and fixed ropes. While they are precarious to use, the do allow people to move back – and forth over and around – the jumbled mess of the icefall.

According to Scott, “the weather is favorable right now. The winds should be OK – the clouds too. Today the skies were crystal blue at the summit . This would have been a great day to be there – but the ropes are not fixed yet.”

While some teams are are aiming for a first wave of summit attempts on 21 May, Scott said that he and his team are looking at a summit attempt with a second wave a day later. The first wave will be climbing more or less done shortly after fixed ropes are put in place across features such as “The Balcony” and the “Hillary Step”. Whereas a second wave a day or so later will allow climbers to climb with ropes that are firmly in place Also, they will tread on snow that has good “kick steps” i.e. flattened steps in the snow put in place by climbers who have already gone ahead.

To get ready for the climb, Scott is wolfing down food, staying hydrated (VERY important at such high altitudes) and getting mentally focused. He told me that the feeling he has right now is identical to what he thinks and feels in the days leading up to a shuttle launch and that “on summit day I’ll have the same preflight jitters!”

While he waits in Base Camp he’ll be making some phone calls back home, including some podcasts that JSC will be posting, sharpening his crampons, and making certain that he knows his gear inside and out.

One piece of gear that he needs to be totally familiar with is his oxygen system. Scott will be using a Topout oxygen delivery system. This unit was designed by a former RAF guy and has a lot of similarity to the masks that are worn in T-38’s.

The mask he is using is interesting. Many breathing systems not exactly efficient in their use of oxygen and a lot is wasted. The system Scott will be using has a reservoir or bladder that takes up oxygen when he is not drawing on it. When he does breathe, he’ll get gas from that reservoir first – and then tap the the flow from the tank. Of course the mask can be set to alter the flow rate to meet whatever demands Scott’s body requires along the way. You can read about the design philosophy here.

The oxygen tanks are certified in the U.S. and pressurized to 3,000 psi with nice, dry oxygen. He’ll have 2 tanks with him on his summit push. At a flow rate of 3 liters/minute he’ll have 10.3 hours of oxygen.

In talking with Scott tonight, it was obvious that he is focused, lucid, “1000% ready to go”, perfectly adapted to the environment, and resolute in his desire to reach the summit of Everest. His enthusiasm is infectious.

From my personal perspective, I really wish that politics and other nonsense beyond my control had not put a hole in my trip. I had little choice but to cancel things less than 2 weeks out after months of preparation, lots of money, and self-motivation. The feeling was a lot like what I imagine it would feel like being taken off of a shuttle mission prior to launch. But you just have to get over it. As with space exploration large teams work together such that a few people actually get to go on the mission. It is no different here.

It was not so much that I miss the experience of being there. Yea, I seem to have fun in dirty, remote arctic places like this i.e. Devon Island. But I can do that almost anywhere. Rather, it was the chance to actually see someone like Scott walk off – and then return – from a true moment in the history of human exploration: becoming the first human to both fly in space and stand atop Earth’s highest point. Yes I’d still have been just an observer – but I’d have had a front row seat unlike any other on Earth! Oh well.

We won’t see firsts like this again until humans start climbing mountains on the Moon, Mars, and elsewhere.

Image below: Scott will leave these banners atop Everest. Styled after the prayer flags you see all over Everest, these banners honor the crews of Soyuz 1, Soyuz 11, Apollo 1, Columbia (STS-107) and Challenger (STS-51l). Scott also has a patch from STS 51-F to honor astronaut Karl Henize who died on Everest in 1993. 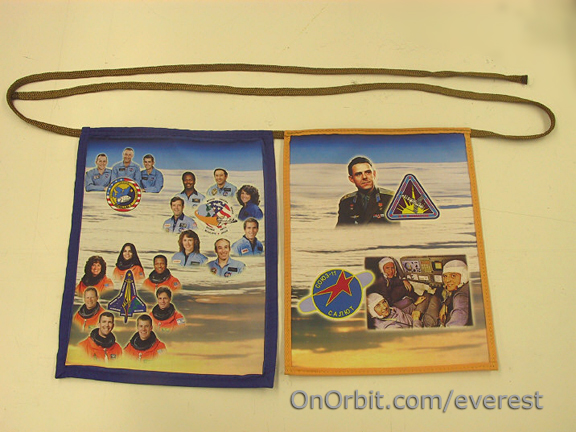 For Scott, the plan is to get to the summit, take some photos, and then head back down. Too much dawdling can be life threatening. Low on oxygen, sapped of strength, he will have only moments to savor the experience.

I first met Scott darn near 20 years ago when I was working at NASA Life Sciences and he was about to graduate from medical school. I have to tell you, NASA could have no better representative in this place – at this time – than Scott.

Although, in the important moments, this climb is a test of one’s personal physical skill and endurance, knowing Scott as I do, when he stands atop Everest he will be standing there for all of the comrades lost in the exploration of space. You can see it by the patches he has on his summit jacket and the banners he will leave behind.

He’ll be thinking of his family and all of the events that somehow led to his presence in this most improbable place.

And he will also be standing there thinking about every person at NASA – and elsewhere – who pursues this passion for exploration of space – no matter how or why they do so.

We’ll all stand atop Everest with Scott. Dig it.