An Overview of Past and Future South African Space Activities

Dr. Martinez started by pointing out that it is generally not known that South Africa has been an active participant in the global space enterprise, and that it has supported space applications mostly from ground but also as an active user of the space environment. An example of this space participation is the South African Astronomical Observatory, which was established in 1820 and used the newly invented technique of astro-photography to, for example, perform the first distant measurement to the nearest star. Some of the other space-related facilities and programs that have arisen in South Africa over the last 40 years include: project Moon Watch, where many South African volunteers made early observations of satellite transits; Deep Space Station 51 which was established by NASA in 1961 in Hartbeesthoek and provided ground support for many missions including Mariner IV (the first Mars fly-by), Lunar rangers as well as some of the Apollo landings, Mariner V (fly by of Venus), and Pioneer 8 (interplanetary Weather Satellite); and South African Earth Scientists who participated in 1970’s analysis of lunar soil samples returned by Apollo program. Martinez noted that Deep Space Station 51, which is known today as the Hartebeesthoek Radio Astronomy Observatory and operated by the National Research Foundation, serves as Africa’s premier space geodetic facility, providing co-location of three of the four major techniques of VLBI (Very Long Baseline Interferometry), satellite laser ranging, and GPS.

Dr. Martinez also talked about the CSIR Satellite Application Centre (SAC) (previously known as Minitrack and operated by Goddard Space Flight Centre until 1975), which is still the premier satellite applications center on the continent, providing many services including TT&C (tracking, telemetry and command), hosting the national earth observation archive, and supporting disaster management assistance for South Africa and neighboring countries. South Africa’s first space program started in the 1980’s with the development of an earth observation satellite and its launch vehicle. Although this program, which was military based, was terminated in mid-1990’s, the facility was taken over by the Department of Communications for various research and training applications including to integrate and test the Sumbandila Satellite. South Africa’s institutional space activities include SUNSAT, a micro (64 kg) satellite built by staff and students at Stellenbosch University, which launched in February 1999 and involved over 100 students from 1992 to 2001. In the early 2000’s, the Southern African large telescope was developed and commissioned in 2005, currently serving as the largest single telescope in the southern hemisphere. Finally, more recently South Africa has been involved in the bidding to host the square kilometer array project, the largest radio astronomy facility to be built. In support of this bid, South Africa has started its own large radio astronomy project called the MeerKat to be built in the Northern Cape, to expand its currently 7 dish array, to 50-70 dishes by 2012. 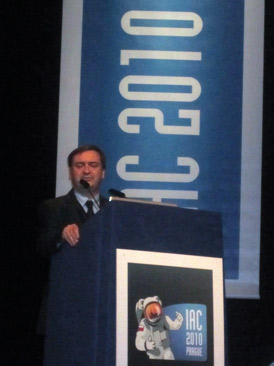 Dr. Martinez expanded on the Sumbandila (meaning “Pathfinder”) micro satellite, which launched recently to help build capacity in the development and execution of the national space program. Owned by the National Department of Science and Technology (DST), managed by the University of Stellenbosch, and contracted by Sunspace, this project which was budgeted at 2.6 million Euros, launched on September 17, 2009 with expected lifetime orbit of 3-4 years, and involved 18 Masters, 2 PhD graduates and 4 postdoctoral fellowships. Sumbandila allowed the South African government to familiarize itself with various space activity management issues, including those related to interdepartmental and interagency coordination, procurement, timelines, licenses, export, transport and assurance. The project also facilitated masters and PhD training at several universities, stimulated the South African industry as it involved over 40 companies, and helped build heritage in the space industry. This project enabled South Africa for the first time to be fully responsible for all aspects of operations and lifecycle management of a satellite mission, as well as stimulated development of various applications, while successfully promoting space awareness on a national level.

Dr. Martinez then talked about South Africa’s space activities and emerging space industry. Industrial actors include IAF members SunSpace and Space Advisory Company/Space Commercial Services, as well as Tellumat and Marcom; governmental actors include DTI (department of trade and industry, and AISI (Aerospace Industry Support Initiative). DTI has the mandate for implementing the space affairs act, and to supervise and regulate space activities (e.g. space policy, legal/licensing, compliance). The implementation itself rests primarily with the Department of Science and Technology (DST), which has developed the DST Strategy as well as the South African Earth Observation Strategy. The South African space policy was launched in early April 2009 by DTI with a goal to improve coordination in the space arena, with objectives that include: enhancing international cooperation, promoting and enhanced space awareness at all levels, developing adequate capabilities, developing and fostering national space infrastructure, strengthening the space science technologies, cooperative governance and coordination, and promoting a domestic space industry. Dr. Martinez provided details and examples of the plan to translate these policies into practice. He also outlined the six basic policy principles, each of which contribute to economical growth and sustainable development:

1. Use space for peaceful purposes and for benefit of humankind
2. Develop robust set of appropriate space capabilities
3. Ensure South African space users are responsible users of space environment
4. Promote R&D in space science and technology
5. Promote greater levels of self sufficiency and international competitiveness
6. Promote mutually beneficial cooperation with variety of international partners, with emphasis on countries in African continent

Dr. Martinez’s talk provided a great overview on the past, present, and future space activities in South Africa, a topic which will be significantly expanded on during next’s year’s IAC, which will be held in Cape Town, South Africa, Oct 3 – 7, 2011, with the theme ‘African Astronaissance’.