Image: Russian built Mini Research Module 1, MRM-1, is set to launch on May 14 aboard Shuttle Atlantis during STS 132 flight. Note the Cyrillic inscriptions. Soyuz and Progress capsules will berth at the docking port at right. Red covers protect sensitive surfaces on the docking mechanism and will be removed before flight to space. Tan colored material is MLI or Multi Layer Insulation and remains on for flight. Credit: Ken Kremer

Ken Kremer, for NASA WATCH, 10 May 2010: Space Shuttle Atlantis is slated to blast off on her final scheduled mission to space on Friday, May 14 at 2:20 PM EDT from Launch Pad 39 A at the Kennedy Space Center (KSC) in Florida. Atlantis is bound for the International Space Station (ISS) on a complex assembly mission to put the “finishing touches” on the massive orbiting outpost. The principal payload nested inside her cargo bay is a stunning Russian Science Beauty named ‘Rassvet’.

The primary goal of STS 132 is to deliver the Russian built ‘Rassvet’ module to the ISS. Although ‘Rassvet’ was constructed entirely in Russia, the module is hitching a ride to space on the American Shuttle Atlantis according to a complex barter agreement to share costs between partner nations of the ISS.

‘Rassvet’ translates as the Russian word for ‘Dawn’ or ‘Sunrise’ and is formally known as the Mini Research Module-1, or MRM 1. The six man crew of Atlantis will transport and attach ‘Rassvet’ to the Earth- facing (nadir) port of the Russian Zarya control module on Flight day 5. The 12 day flight includes 3 spacewalks.

MRM-1 will be the 4th Russian docking port at the ISS. This additional docking port will greatly simplify the planning by ISS mission managers for accommodating the busy manifest of berthings of incoming Soyuz, Progress and ATV vehicles on the Russian side of the station and alleviate the need to re-park the spacecraft as new vessels arrive. MRM-1 is the second of two new pressurized modules recently contributed by Russia. The first was the MRM-2 module, named Poisk, which launched to space on a Russian rocket and linked up with the station at a zenith facing port on Zarya on Nov. 12, 2009. Together, these two modules are the first significant Russian additions to the ISS since 2001. 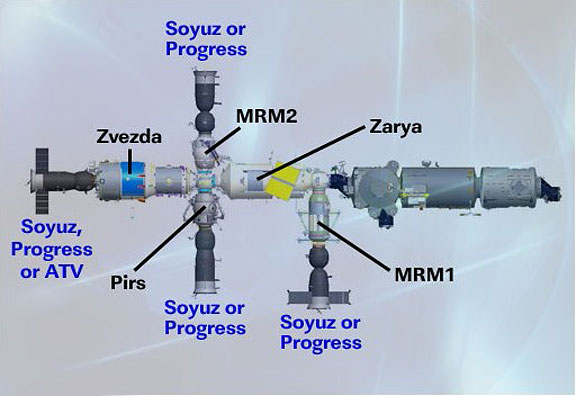 Location of MRM-1 and other components on the Russian Orbital Segment of the ISS. Credit: NASA

Russian space managers unveiled ‘Rassvet’ during final close out operations at a press briefing I attended at the Astrotech Space Operations Facility in Port Canaveral, FL. Astrotech is located a few miles south of the KSC launch pads.

From inside the “clean room”, I was quite fortunate to participate in a close up inspection of the gorgeous ‘Rassvet’ research module. I was struck by how completely different in shape and colorfully vibrant she looked compared to all the uniformly gray colored cylindrical modules I have seen contributed by the other major ISS partners. Other than the length, the habitable pressurized modules from the US, Europe and Japan all look quite similar from the outside. ‘ At the Astrotech briefing, we also had the rare opportunity to speak with the top Russian space officials from RSC Energia who are directly managing the construction of ‘Rassvet’. They were quite friendly and willing to openly answer all questions.

“Let me welcome you all here to view MRM 1 which was designed by RSC Energia, one of the leading corporations in Russia,” said Mikhail Kashitsyn, the Deputy Technical Manager and Head of MRM 1 Prelaunch Processing for the Design Bureau division of RSC Energia. RSC Energia is the prime contractor to Roscosmos, the Russian Federal Space Agency, and is responsible for the design, development and processing of MRM 1. “It’s wonderful we have this cooperation with our American colleagues and I want to express my thanks to the US and NASA for their help and mutual understanding”. “MRM 1 arrived in Florida on Dec 17, 2009 from Russia and will be utilized for scientific research, cargo stowage, and also to provide an additional docking port at the ISS,” said Mr. Kashitsyn. “MRM-2 was specifically built to function as an airlock for EVA’s while also serving as a docking port”. Rassvet will basically act as an extender for the nadir berthing port on Zarya so as to provide the clearance necessary for incoming ships to dock. The port became blocked when the Tranquility module (Node 3) was attached by the STS 130 mission in Feb 2010. See diagram showing location of MRM-1 and other components on the Russian Orbital Segment of the ISS.

“In part, we are launching ‘Rassvet’ on the shuttle because it was hard to fit it under the standard shrouds of Russian rockets. But it’s a very tight fit even inside the shuttle cargo bay with only several centimeters to spare”.

“Several thousand people worked on MRM 1 in Russia and it took about 2 years to build. About 100 people from Russia are involved in the pre launch preparations here at Port Canaveral. We have been working at a steady pace to complete the final check out and assembly of MRM 1for installation into the shuttle orbiter”.

“The module will also be loaded with 1.5 tons of NASA cargo and supplies for the ISS, including items such as food, lithium hydroxide canisters, computers and printers”, according to Kashitsyn.

“The next Russian module, the MLM (Multipurpose Lab Module) is being manufactured right now. The shell is complete. The inside work is in progress and there are still many tests to do to complete the MLM”.

When asked about the state of the ISS resupply situation after the upcoming retirement of the shuttle, Kashitsyn said “That will pose some problems. However, the Russian side is prepared to assume an increased role in transporting cargo resupplies and astronauts to the ISS”.

At the briefing, NASA was represented by Robert Ashley, who is the ISS manager responsible for the STS 132 payload processing. “These will be the last payloads for Atlantis,” Ashley stated. “This will be my last mission as a station mission manager. It’s bittersweet. There will be a lot of lasts for a lot of people on these final shuttle missions”.

The MRM-1 payload is nearly 20 ft in length and weighs over 17,600 pounds. It is composed of the module itself, an airlock chamber, an exterior portable work station and radiator as well as elbow joints for the European Robotic Arm.

Atlantis is also loaded with a second large payload, namely the 8000 lb Integrated Logistics Carrier (ICC). “The ICC will be carrying spare parts and Orbital Replacement Units (ORU’s) including six spare batteries, a high powered Ku-band antenna and boom assembly and hardware component spares for the Canadian built Dextre robotic arm extension,” according to Victor Blum of EADS Astrium. “The ICC will be moved out of the shuttle payload bay with the stations Canadian built robotic arm.”

Only 3 flights remain until the Space Shuutle program is retired late this year or early next year unless the shuttle program is extended. 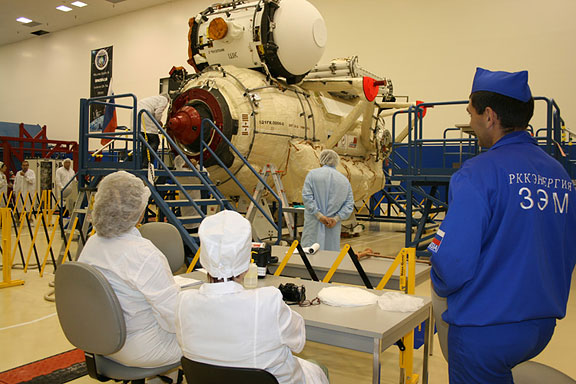 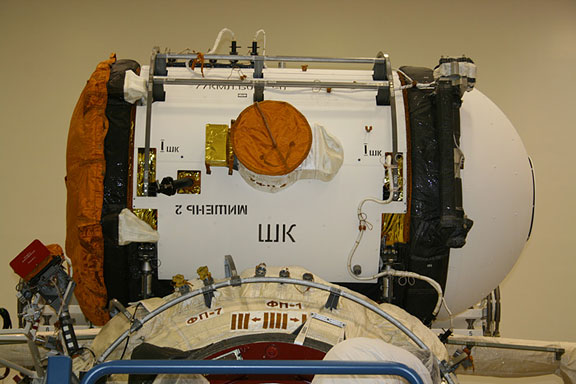 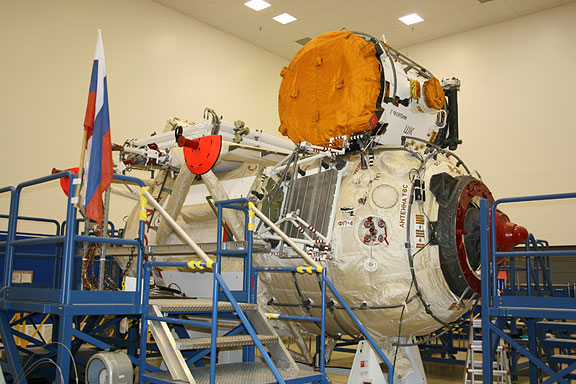 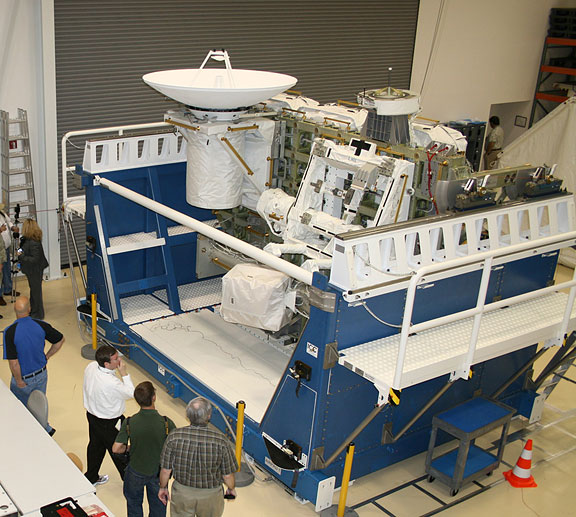