Preparations are well underway for the coming field season for the NASA Haughton-Mars Project. This includes the aerial scouting of base camp last week. 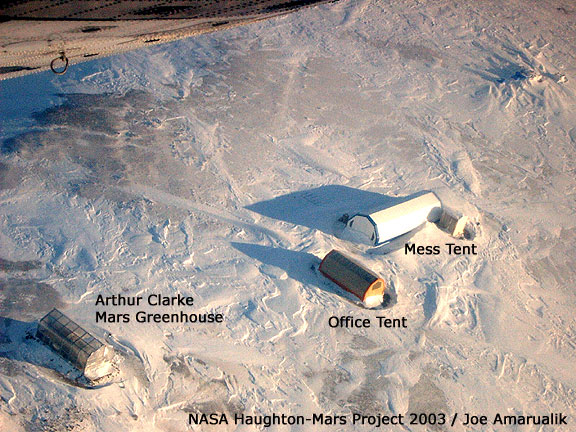 Based on this image and others obtained during the flyby, the two camp tents left in place for the winter (center
right) and the Arthur Clarke Mars Greenhouse established in July, 2002 (left) appear to be in good condition. The
large white-colored tent with blue trims at center right, the HMP’s Mess Tent, is 16 meters (48 feet) long. The
wooden shower hut adjacent to the Mess Tent and the weather station mast mounted on the outside of the Greenhouse
can also be discerned and appear to have withstood the rigors of the Arctic winter as well.

Elongated snow drifts
formed around camp structures are the result of dominant winds from the W-NW (i.e., from the lower right of the
image). The dark mottled patch near the upper right hand corner of the frame is the HMP’s food supply stored in
snow-drifted but sealed coolers. Food is always cached away from other camp structures so that in the event of
a polar bear incursion (evidence for which is found every year), camp structures are less likely to be disturbed.

The HMP Base Camp will reopen for field research this year from early-July through mid-August, 2003.