A Venus Celebration – For Young and Old Alike

In Africa, Asia, Europe and parts of North America people gathered to witness what no living human has seen, the transit of Venus in front of the Sun. The transit began at 0513 GMT (1:13 AM EDT) and ended at 1126 GMT (7:26 AM EDT).

The last transit occurred in 1882. Sir Robert Ball of the Dunsink Observatory in Dublin, Ireland described the transit as follows; “After the first contact the planet crosses the sun’s margin and gradually encroaches on the brilliant surface. Slowly but steadily the planet advances until the phase of second contact, when after about a half-an-hour the black disc is entirely visible. Slowly the planet wends its way across, followed by hundreds of telecopes from every accessible part of the globe whence the phenomenon is visible, until at length, in the course of a few hours, it emerges at the other side.”

He went on to comment in the book Star-Land geared towards the youth of the day; “One might naturally think … that Venus must pass at every revolution directly between the earth and the sun; and therefore it might appear that what is called the transit of Venus across the sun ought to occur every time between the appearance of the planet as the evening star and the next following appearance as the morning star.

No doubt on each occasions Venus seems to closely approach the sun; but the orbits do not lie quite in the same plane, and hence the planet usually passes just over or under the sun, so that it is very rare event indeed for her to come right in front of the sun. But this does sometimes happen. It happened, for instance, in the year 1874, and again in the year 1882;. but, alas! I cannot hold out to you the prospect of ever seeing a repetition. There will no further occurrence of the transit of Venus until the year 2004, though there will be another eight years later, in the year 2012.”

It seems only fitting that today’s youth participated in today’s event in a significant way. Educational and public outreach programs around the globe engaged children in various programs including watching the event live where possible, and where you couldn’t see it in person, you could watch on the Internet. The next transit will be in 2012 and then not until 2117! 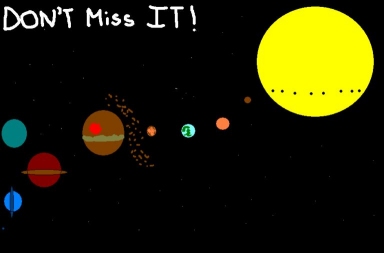