Highlight Lecture 1, titled “Overview of space activities in South Africa” was held on Monday, September 27, 2010. Dr. Peter Martinez, who holds a Ph.D. in Astrophysics and was appointed Chair of South Africa Council for Space Affairs in July 2010, gave an informative talk starting with a historical overview of development of space activities in South Africa. He also made some remarks about the establishment of the South African National Space Agency (SANSA) which is under development. You can read our full feature story on this talk here. 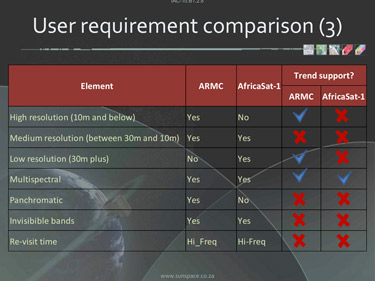 The South African participation in the “Space Debris Symposium” included a poster presentation titled “Laser Deflection of Space Debris” by Franz-Josef Kahlen of the University of Cape Town and talk a titled “Comparative Overview: ARMC Small Satellite Constellation and Africasat-1, a Geostationary EO (Earth Observation) Satellite by Ron Olivier of SunSpace. Ron Olivier provided an overview of the two systems, then compared specifications/user requirements, costs, and geopolitical considerations. While both ARMC and AfricaSat-1 seem to meet user requirements for Medium Resolution, Multispectral, Invisible Bands, and Re-visit Time specs, ARMC meets High Resolution and Panchromatic specs whereas AfricaSat-1 meets Low Resolution specs. Some cost estimates were also given for both systems, as for example ARMC total cost of 123M Euros (for 5 satellites for 10 years), and AfricaSat-1 total cost of 130M Euros (for 5 African countries). A geo-political decision-making comparison showed that while AfricaSat-1 provides an easier road to economic justification but falls short of NEPAD initiatives, ARMC is a more difficult economic value proposition but subscribes to NEPAD tenets and meets capacity building requirements. From a national security perspective, ARMC proves significantly better control for participating nation states than AfricaSat-1. Also, ARMC already meets the basic requirements of international collaboration and promises further collaborative opportunities, whereas AfricaSat-1 provides a discredited hand-out model as basis for collaboration. Lastly, ARMC has lower risk in terms of catastrophic failure in compared to AfricaSat-1. Overall, it seems that ARMC offers far more advantages over AfricaSat-1.

The “Small Satellite Missions Symposium” covered related South African space projects, namely in talk “Integrated Small Satellite Disaster Management Solution for developing Countries” by Sias Mostert of Space Commercial Services Holdings and talk “In-Orbit AODCS Performance of SumbandilaSAT an Earth Observation Satellite for South Africa” by Willem Steyn of ESL. Professor Mostert outlined and defined elements pertaining to disaster management and then explained the role of space infrastructures for this application. He stated that disaster depends on 3 elements: hazard (unplanned event like drought, storms, floods earthquakes), vulnerability (intrinsic and dynamic feature of an element at risk), and exposure. He further defined that risk is a function of hazard and vulnerability, and that resilience is the result of coping capacity and ability to remain operational. Using two examples, Prof. Mostert showed that with proper planning and implementation, assessment as well as lowering of vulnerability can be achieved by using space-based observations. This space infrastructure can also be used not only for disaster preparation but also in between disaster events for increasing resilience of the community, thus decreasing vulnerability. He concluded that existing space-based resources are not optimized for monitoring of local vulnerability and hazard indicators. Many satellites are required for sufficient local monitoring of lead indicators. Small satellites are affordable, but have limited capabilities. He proposed one way to address this and to combine resources is via a virtual satellite constellation. Professor Steyn’s talk described the AODCS (attitude and orbit determination and control system) commissioning results of the single-string SumbandilaSAT microsatellite. He described in very technical manners how full 3-axis stability is achieved in spite of the lost Z-axis reaction wheel, thus achieving an almost fully successful mission. 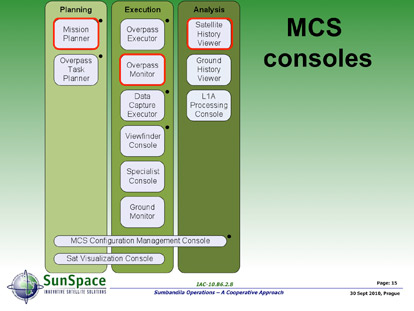 As part of the “Space Operations Symposium”, Jan-Albert Koekemoer of SunSpace in South Africa gave the talk titled “Sumbandila Operations – A Cooperative Approach”. Sumbandila, meaning “pathfinder”, is South Africa’s first National satellite. It was designed and built by SunSpace in a record time of 15 months, with a cost of only US$1.6 Million (2006 value). It launched on September 17, 2009 on Soyuz-2b, and has provided an output of 690 images (about 400GB worth of data) since its launch. The mission organizational structure involves 8 entities with various roles, as for example: Stellenbosch University as prime contractor, SunSpace as designer authority, RSA Government as satellite owner, and Satellite Applications Centre (SAC) as operator. This structure, along with the transfer of operations to SAC (after the first 6 months of satellite commissioning) meant that Sumbandila needed careful planning and management. Mr. Koekemoer then provided details about mission operations, with the focus on a custom developed Mission Control System (MCS), which served very valuable in these processes. MCS has 3 primary functions, implemented as 13 distinct consoles. The functions are: allowing planning of future satellite activities, managing satellite interaction during overpasses, and, decoding, archiving and providing access to satellite TLM and status information. Supporting a distributed architecture, MCS allows for reusability of the system for future missions, and obscures much of the complexity of the satellite. MCS proved invaluable in the transferring of operations to SAC, and contributed to the successful distributed deployment of the ground segment. Jan Koekemoer concluded the presentation by providing a LIVE demonstration of the MCS system. 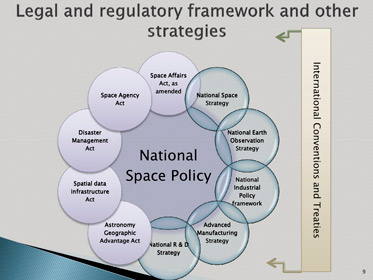 One of the talks under the “23rd Symposium On Space Policy, Regulations And Economics” was given by Lulekwa Makapela from the Department of Trade and Industry in South Africa. Her presentation titled “The National Space Policy: Movement towards a more Co-ordinated Approach of Space Activities in South Africa”, entailed the co-ordination and co-operative governance approach proposed by the National Space Policy, as well as other related legal frameworks and strategies that regulate space activities in South Africa. Ms. Makapela stated that South Africa’s national space policy, which was launched in 2009, has three rationales for coordination of space activities: to prevent duplication of efforts, to increase efficiency and effectiveness, and to encourage informational sharing. This policy, which serves as a guidance document and is implemented by various stakeholders (Government, Agencies, Industry and Academia), has resulted in increase of South African space activities. Ms. Makapela reinforced some of Dr. Martinez statements in Highlight Lecutre 1 in that the policy has an overarching principle that space activities should contribute to economic growth and sustainable development, and that it includes six guiding principles. She stated that the most important principle is Cooperation and Government Coordination, which involves the public sector, public institutions, the private sector, and academia. She concluded with some recommendations that included: continuous reorganization of South African space activities by streamlining overlapping space-related functions, strengthening Intra national and Inter national Cooperation, and, progressively increasing budget to match the concrete actions designed to respond to the needs.

In addition to the lectures and talks, several South African organizations and agencies were represented at IAC, which included: National Research Foundation (NRF), Space Commercial Services Holdings (Pty) Ltd, Stellenbosch University, Sun Space and Information Systems, and the University of the Western Cape. Together, all these representations from South Africa provided a great background and preview to what will follow at next year’s International Astronautical Congress, which will be held in Cape Town, South Africa, from Oct 3-7, 2011.