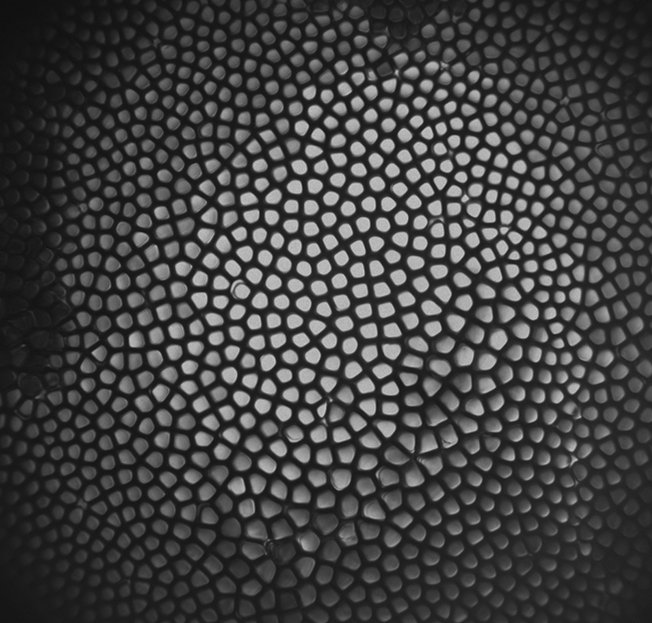 A cellular pattern interface grown in microgravity, seen from the top in an image taken by the Directional Solidification Insert. Image Credit:  Nathalie Bergeon

If you put a camera in the ice machine and watched water turn into ice, the process would look simple. But the mechanism behind liquids turning to solids is actually quite complex, and understanding it better could improve design and production of metals. A recent investigation aboard the International Space Station contributed to that understanding.

A series of experiments conducted in the Directional Solidification Insert (DSI) of the Device for the study of Critical Liquids and Crystallization (DECLIC) used transparent alloys to observe microstructures that form at the point the material solidifies. These alloys, or “plastic crystals,” freeze or solidify the same way metals do and form the same microstructures in the process. But because metals are opaque, researchers have to analyze the process of solidification after the fact. With the transparent alloys, they can observe solidification as it happens. Using transparent alloys also makes it possible to perform multiple experiments on the same sample, and transferring images to the ground for analysis, rather than actual samples, greatly reduces the cost.

The DSI recorded images during the entire solidification process. Top views clearly show the microstructure pattern forming at the interface between liquid and solid, and side views provide the shape and motion of that interface.

Alloy solidification involves crystallizing or freezing a liquid mixture of different atomic constituents. For example, a mixture of iron and carbon hardens into steel. 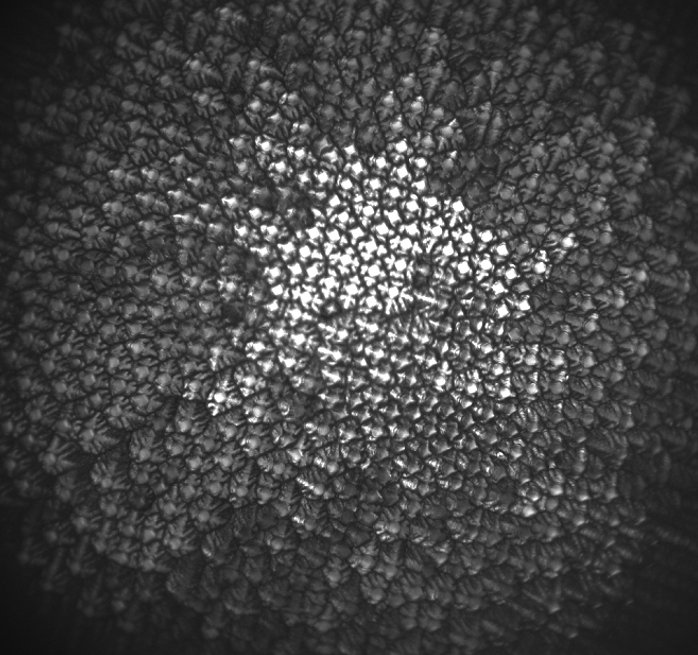 “The distribution of these constituents in the solid depends on the growth process and behavior at the interface between solid and liquid,” explains principal investigator Nathalie Bergeon, Ph.D., Institut Matériaux Microélectronique Nanosciences de Provence in France.

The process can be controlled by applying a temperature gradient and pulling the liquid toward the cold part to solidify, a technique known as directional solidification and one of the key ways to study solidification.

During directional solidification, the liquid-solid interface develops either three-dimensional cell-like structures or snowflake-like dendrites. Their pattern and size play key roles in the mechanical and physical properties of the material; for example, finer-sized structures generally yield stronger materials. These characteristics play a role in all materials processed by commercial solidification techniques, such as continuous casting and laser welding.

Gravity has a strong effect on those characteristics, but that influence is greatly reduced in the microgravity environment of the space station, offering controlled conditions for study. Better understanding of these microstructure formations will, in turn, help scientists design and produce more reliable materials and materials with specific properties, as well as help to develop and test solidification models. Observing these processes in a microgravity environment also helps scientists refine theoretical models and numerical simulations of metallic alloys. Ultimately, this work could result in new and better materials for use in manufacturing on Earth. Cell and dendrite characteristics and their effect on materials were recently published in the journalActa Materiala.

Investigators also found that the cells and dendrites that form during solidification sometimes adopt surprising behaviors. For example, for certain growth parameters, the three-dimensional cellular structures moved or oscillated as they grew, expanding and contracting rhythmically much like lungs do when someone breathes. The cells oscillate according to the underlying pattern they formed. These breath-like oscillations can split cells if they expand too much or cause them to disappear if they contract too much. These findings were published in Physical Review Letters.

In addition to the directional solidification study, DECLIC has been used to investigate low and high temperature critical fluids behavior, chemical reactivity in supercritical water, and transparent media under microgravity. The tool was developed by the French Space Agency (CNES) and operates as a joint project between CNES and NASA. Researchers at Aix Marseille Université, France; Iowa State University; and Northeastern University, Massachusetts, collaborated on the DECLIC-DSI investigation.

We may not be interested in watching the water in our ice machine freeze, but understanding the solidification process will help researchers improve metal materials used for pipes, airplane wings, turbine blades and other applications.