By SpaceRef Editor
July 4, 2012
Filed under Earth, The Antarctic Sun, US 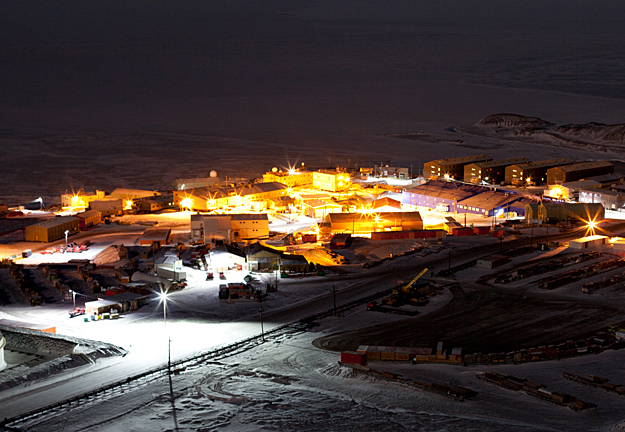 Image: McMurdo Station during the winter of 2011. The research station joined with the rest of the Antarctic bases in celebrating the winter solstice, a tradition that dates back to the early explorers. Photo Credit: Ken Klassy/Antarctic Photo Library. Larger image.

The winter solstice in the Southern Hemisphere fell on June 20, a traditional day of celebration for those spending the winter in Antarctica. Research station crews exchange Midwinter Greetings to one another through email, usually with photos of the group and a message of goodwill for the more than 40 permanent research stations on the continent.

U.S. President Barack Obama added his voice of greeting with an official statement from the White House:

“As you continue to brave harsh winter nights, know that your bold example will inspire future generations to expand the horizons of human knowledge. In keeping with the enduring Antarctic Treaty, your work will lead to broader cooperation among nations as we promote environmental stewardship and preserve our planet.”

Early Antarctic explorers also paused on the shortest day of the year to reflect and feast, looking forward to the return of the sun after enduring months of darkness and cold.

“At six we had our dinner in the wardroom, with the table decorated and the display of all our plate. Starting with turtle soup, we passed on to a generous helping of mutton, and from that to plum pudding, mince pies, and jellies, all washed down with an excellent dry champagne. With a largely assorted dessert of crystallized fruits, almonds and raisins and nuts came the port and liqueurs, which brought us into good form. … With such a dinner we agreed that life in the Antarctic Regions was worth living.”

These days, turtle soup has been replaced by sesame sashimi tuna tartar and plum pudding with chocolate lava cake and vanilla ice cream — just a couple of items off the menus from the U.S. Antarctic Program research stations.

The research stations also host parties and other activities in conjunction with the winter solstice. In one of the more unique and slightly macabre traditions, South Pole Stationholds a viewing each year of Stephen King’s “The Shining,” a thriller about a caretaker driven made by winter isolation. The last flight left South Pole in mid-February and another plane isn’t scheduled to arrive until late October.