View From Space: Typhoon Noul beginning to strengthen in the West Pacific 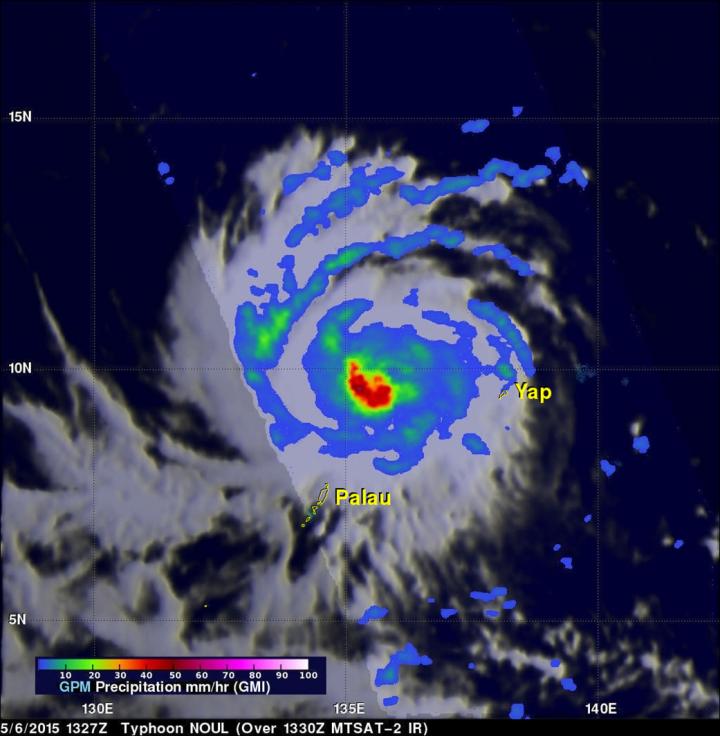 Since its formation as a tropical depression 3 days ago, Typhoon Noul has taken on a general westward motion while steadily working its way across the central-west Pacific. During this time, the system passed over Yap where it brought heavy rain and strong gusty winds. Thus far, Noul has been only slowly strengthening, becoming a minimal typhoon just one day ago. That appears likely to change, however, as the system now seems poised to intensify as it passes well north of Palau in the genearal direction of the Philippines.

NASA’s GPM Core observatory satellite captured this image of Noul as it was moving west-northwest about 175 miles northeast of Palau. The image was taken at 13:27 UTC (10:27 pm, Palau time) on 6 May 2015 and shows estimated rain rates within Typhoon Noul from the GPM Microwave Imager or GMI. GPM shows several well-defined rain bands (blue/green arcs) wrapping around the northern half of the storm. The strong curvature in those rain bands reflects the well-formed cyclonic circulation associated with Noul.

Nearer to the center of the storm in the southwest quandrant is a sizeable area of heavy rain (shown in red). Areas of heavy rain near the storm’s core are an indication that it could intensify as these show where large amounts of heat are being released into the storm’s circulation, helping to sustain and possibly intensify it. Right now conditions appear conducive for strengthening. The Joint Typhoon Warning Center is forecasting Noul to intensify into a category 3 typhoon by tomorrow with the potential to become a super typhoon within the next 2-3 days somewhere in the vicinity of the northern Philippines.