By SpaceRef Editor
February 16, 2013
Filed under Earth, polar, The Antarctic Sun, US 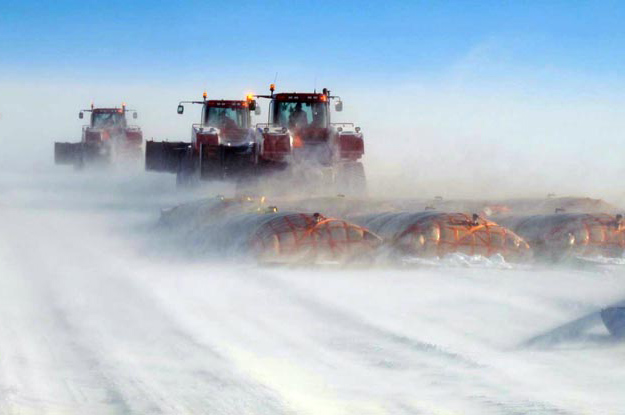 Talk about the ultimate road trip. The primary South Pole operations Traverse (SPoT) spent nearly 100 days away from McMurdo Station during the 2012-13 season, traveling more than 3,500 miles across the Ross Ice Shelf and East Antarctica. SPoT is a tractor train that hauls supplies and fuel using sleds in lieu of aircraft. The traverse stopped twice at the South Pole Station , delivering about 140,000 gallons of fuel.

The SPoT team also drove more than 800 miles roundtrip to an abandoned field camp to remove 80,000 pounds of cargo. On the homestretch, the team even picked up a science instrument nearby its route on the ice shelf that had flown around the continent aboard a high-altitude balloon. All that driving around saved the U.S. Antarctic Program an estimated 65 LC-130 flights. That makes those planes available for other missions around the continent, as well as saves fuel and carbon footprint.

Above, a windy day blows snow across the tractor train as it climbs the Leverett Glacier to the polar plateau. Below, a tractor pulls sleds containing fuel bladders in front of White Island near McMurdo Station.