UKube-1 – the UK’s first cubesat mission – has ‘booked’ its journey into space on a Russian Soyuz-2 rocket. The launch from the Baikonur Cosmodrone in Kazakhstan is expected to take place in March 2013. 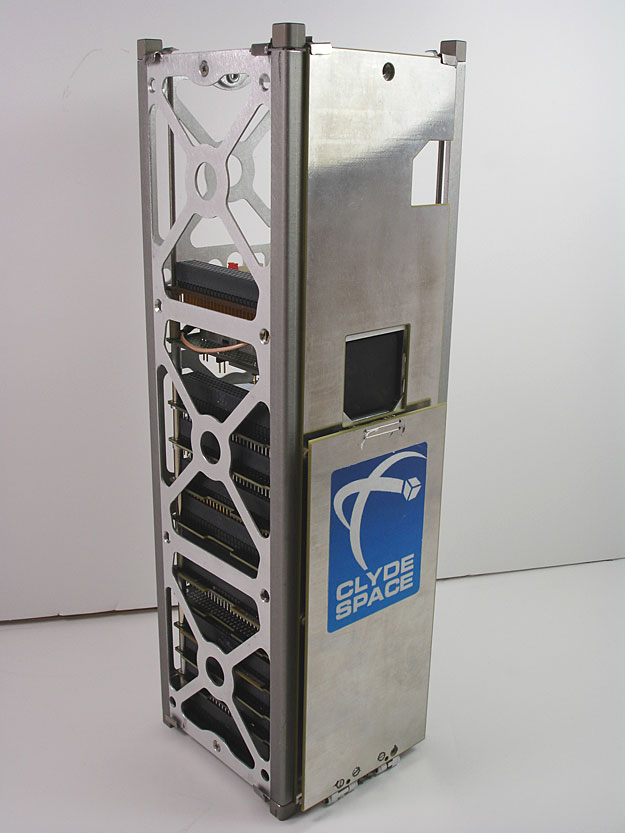 The UKube-1 nanosatellite is a collaboration between the UK Space Agency, industry and academia. It will allow the UK to fly educational packages, test new technologies and carry out new space research quickly and efficiently. It is envisaged as the pilot for a full national CubeSat programme.
Dr David Williams, Chief Executive of the UK Space Agency, said, “UKube-1 is almost ready to fly; the platform is nearly complete, 4 of the missions 5 payloads are mission-ready and we have now secured a launch with Roscosmos. We are eagerly awaiting the start of the innovative experiments that this small but mighty satellite will perform once in orbit around our planet.”

The winning UKube-1 payloads from the UK Space Agency’s payload competition include the first GPS device aimed at measuring plasmaspheric space weather; a camera that will take images of the Earth and test the effect of radiation on space hardware, using a new generation of imaging sensor; an experiment to demonstrate the feasibility of using cosmic radiation to improve the security of communications satellites and to flight test lower cost electronic systems; and a payload made up of 5 experiments that UK students and the public can interact with.

As well as providing a fantastic opportunity for innovative UK companies and UK academics to collaborate on a national space project, UKube-1 is also useful for training the next generation of space engineers and will include a tiny radio transmitter for science education, and a materials science experiment from which school students can receive data. The system, funded by volunteer members and friends of AMSAT-UK, is called FUNcube and will be integrated with UKube-1 as part of the programme.

Astrium’s Janus payload is designed to demonstrate the feasibility of using space-based cosmic radiation to produce true random number generation in satellites for the first time. Random number generation is an essential component of secure communication systems and the Janus payload could pave the way for highly-secure telecommunication satellites. The Janus mission will also act as a technology demonstrator to determine the effects of cosmic radiation on a high performance integrated circuit in the payload – a Xilinx Field Programmable Gate Array (FPGA). The FPGA has the potential to be re-programmed in orbit and therefore could lead to further advancements in the payload’s overall functionality.

The Open University’s CMOS Imager Demonstrator is based on new sensor technology which is being developed and evaluated for space use. It is designed to perform a variety of imaging tasks and will take images of the Earth and test the effect of radiation on instruments in space.
myPocketQub

UKSEDS myPocketQub is a pocket spacecraft that will carry a stack of different experiments, allowing students and hobbyists to take part in a space mission.

TOPCAT, a project from the University of Bath, will be the first GPS device aimed at measuring space weather conditions in the plasmasphere (the areas of space just beyond the earth’s atmosphere).
The results from the measurements taken by TOPCAT will allow these conditions to be monitored and reacted to, reducing negative implications for GPS and improving systems such as satellite navigation and telecommunications. TOPCAT is funded by the University of Bath and the Bath Alumni Fund.
The funding partners for UKube-1 are the UK Space Agency, the Science and Technology Facilities Council and the Technology Strategy Board. The spacecraft is being developed through an existing Knowledge Transfer Partnership (KTP) with innovative Scottish space company Clyde Space and the University of Strathclyde. Engineering and programme management support is provided by the UK’s largest space company, EADS Astrium Ltd. The platform development is supported through internal funding from ClydeSpace and STFC sponsorship of the KTP.

As well as the platform and payload elements of the mission, UKube-1 is being generously supported by three Ground Stations. Led by the STFC Rutherford Appleton Laboratory’s Ground Segment, these crucial elements will provide the link to the orbiting spacecraft, as well as full planning of the operations. The supporting ground stations are provided by Dundee and Strathclyde Universities.
Companies providing free support to UKube-1 include Isotron, Xilinx, Invotec and DS SolidWorks Corp.