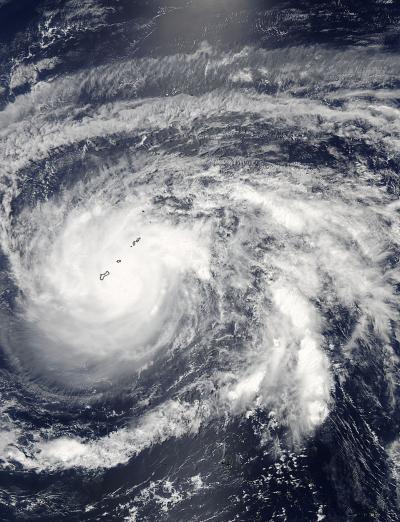 Typhoon Dolphin passed through the Northern Marianas today just to the north of Guam with sustained winds estimated at 95 knots (~109 mph) by the Joint Typhoon Warning Center (JTWC). The center passed through the Rota Channel less than about 25 miles from the northern tip of Guam, close enough for the southern half of the eye wall to rake the northern part of the island with powerful winds. A wind gust of 106 mph was reported at Andersen Air Force Base located on the northeast corner of Guam. Maximum wave height is 35 feet.

The natural-color satellite image above was collected by the Moderate Resolution Imaging Spectroradiometer (MODIS) aboard the Aqua satellite on May 15, 2015. NASA image courtesy Jeff Schmaltz, MODIS Rapid Response Team.

NASA’s GPM Core observatory satellite captured this image of Dolphin just as the center was exiting the Rota Channel north of Guam. The image was taken at 10:16 UTC (8:27 pm, Guam time) on 15 May 2015 and shows the estimated rain rates within Typhoon Dolphin from the GPM Microwave Imager or GMI. GPM shows several well-defined rain bands (blue/green arcs) wrapping around the storm.

Their strong curvature reveals the well-formed cyclonic circulation associated with Dolphin. Nearer to the center in the northwest quandrant is an area of area of heavy rain (shown in red) that is associated with the northwest portion of the storms eyewall, which contains the strongest winds. Conditions appear conducive for strengthening and Dolphin is expected to intensify over the next couple of days before recurving northeastward well before approaching Japan and transitioning to an extra-tropical cyclone near Iwo To.